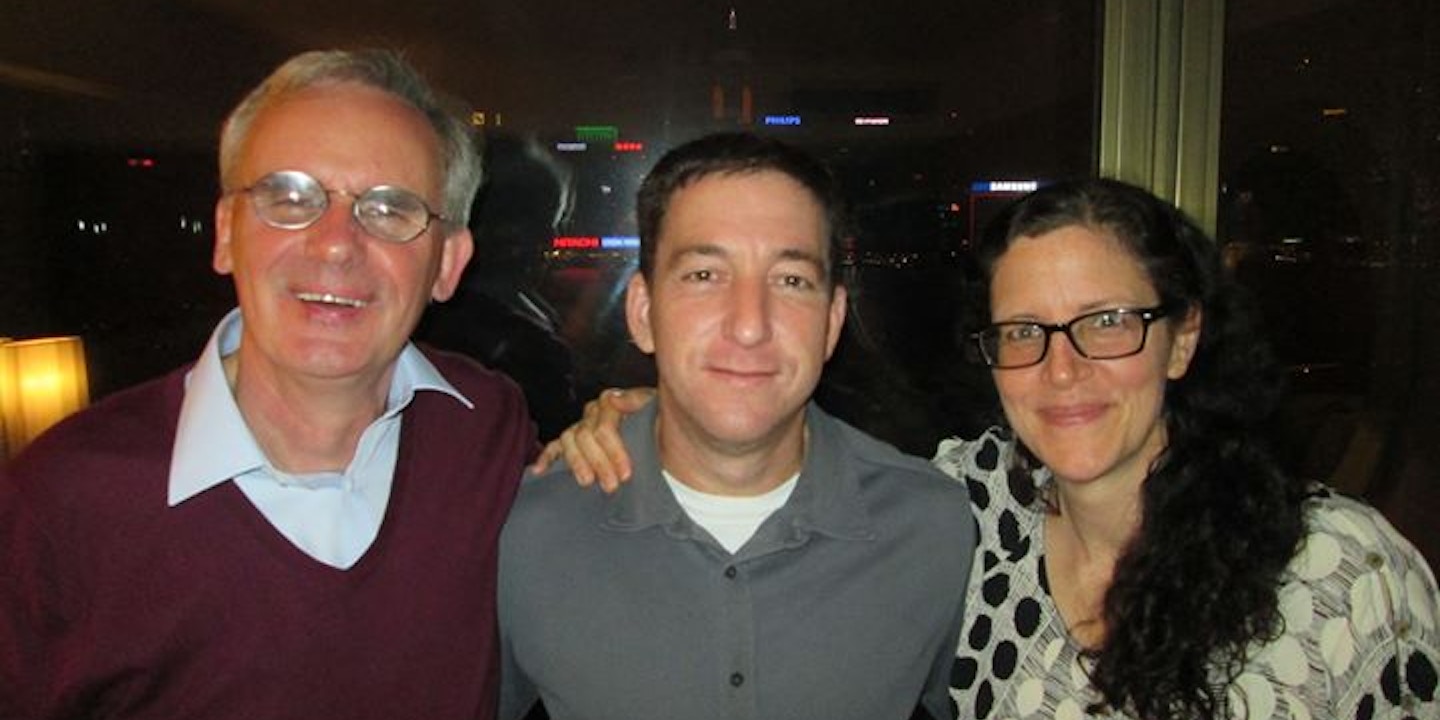 Whether Greenwald and Poitras will return to the U.S. to collect their prize remains to be seen, however, as senior government officials have repeatedly employed rhetoric equating the journalism the Polk Award is recognizing to criminal activity. Greenwald is currently living in Brazil; Poitras in Germany. Both are American citizens.

The announcement praised Greenwald, Poitras, MacAskill and Gellman for using “their extensive backgrounds covering national security to explore the purloined files and reveal their stunning import, describing how the NSA gathered information on untold millions of unsuspecting — and unsuspected — Americans, plugged into the communications links of major Internet companies and coerced companies like Yahoo and Google into turning over data about their customers.”

The awards were established in honor of CBS correspondent George Polk, who was murdered in 1948 while covering the Greek civil war. The awards “place a premium on investigative and enterprise work that is original, requires digging and resourcefulness, and brings results.” They will be presented at a ceremony in New York City on April 11.

Other winners this year included James Yardley of the New York Times for coverage of the disastrous Rana Plaza collapse in Bangladesh; Eli Saslow of the Washington Post for writing about the lives of food stamp recipients; Shawn Boburg of the Record of Northern New Jersey for tracing the decision to close lanes on the George Washington Bridge; four reporters for the Center for Public Integrity for reporting on how regulators and prosecutors have failed to hold a single major player on Wall Street accountable for the reckless behavior that sparked the 2008 financial crisis; and Matthieu Aikins for his Rolling Stone investigation into the role of U.S. forces in the deaths of 10 Afghan civilians in late 2012.

“Many of the journalists we have recognized did more than report news,” award curator John Darnton said in a statement. “They heightened public awareness with perceptive detection and dogged pursuit of stories that otherwise would not have seen the light of day. Repercussions of the NSA stories in particular will be with us for years to come.”

Under the Obama administration, six government employees and two contractors – Snowden included – have been the targets of felony criminal prosecutions under the Espionage Act, double the number under all previous administrations combined. Meanwhile, the Department of Justice, under a veil of secrecy, has subpoenaed and seized journalists’ phone and email records in at least two investigations.

The administration’s concerted effort to investigate unsanctioned leaks has had a chilling effect on the relationship between reporters and sources, as documented in a special report published by the Committee to Protect Journalists last year.

In October, Free Press – a journalism advocacy organization – delivered a letter with more than 75,000 signatures to the Department of Justice, calling on Attorney General Eric Holder to “protect freedom of the press and our freedom to travel without fear of unwarranted interference.

“Both Poitras and Guardian journalist Glenn Greenwald, U.S. citizens who have led the reporting on recent NSA revelations, worry that their safety and security would be compromised if they returned to the U.S.,” the letter said.

One month after the letter was delivered, Holder indicated the U.S. government was not, at that moment, considering prosecuting Greenwald. “Unless information that has not come to my attention is presented to me, what I have indicated in my testimony before Congress is that any journalist who’s engaged in true journalistic activities is not going to be prosecuted by this Justice Department,” Holder told the Washington Post.

“I certainly don’t agree with what Greenwald has done,” the attorney general added. “In some ways, he blurs the line between advocate and journalist. But on the basis of what I know now, I’m not sure there is a basis for prosecution of Greenwald.”

The DOJ did not respond to multiple requests for comment on this article.

In an email to The Intercept over the weekend, Josh Stearns, Press Freedom Director at Free Press, said:

U.S. journalists who have exercised their First Amendment rights around the world should be welcomed home, not harassed and detained. It is unconscionable that American journalists are afraid to return home for fear of their own safety and the security of their work. A number of recent cases raise real questions about press freedom at the U.S. border where journalists have been detained and had their electronics searched because of their reporting or because of their ethnicity. Neither is acceptable.

And too often, when journalists and newsrooms go looking for answers they are stonewalled. The intimidation and harassment of journalists at U.S. borders is bad enough, but the utter and complete lack of accountability is outrageous. That’s why more than 75,000 people signed a petition to the Department of Justice calling for assurances that Greenwald, Poitras and other journalists could travel freely back to America.

Poitras and Greenwald expressed their appreciation for the award Sunday night, and said they are weighing their options on the question of return.

“I would love to accept the Polk award in person with Glenn and Ewen, but I’m not sure I feel safe to travel to the U.S.,” Poitras said in an email. “Listening to senior members of the government describe reporters working on the NSA story as ‘accomplices’ concerns me. On the other hand, receiving this award for the NSA reporting might be the perfect moment to confront this kind of intimidation.”

Greenwald added, “Given that we’ve been accused of ‘terrorism’ by the UK government and ‘accomplices’ by the U.S. government, having our colleagues recognize our work for what it is — journalism — is gratifying.”