Gallup, 2013: “Ten years have passed since the United States and its allies invaded Iraq, and it appears the majority of Americans consider this a regrettable anniversary. Fifty-three percent of Americans believe their country ‘made a mistake sending troops to fight in Iraq’ and 42% say it was not a mistake.”

Gallup, 2014: “For the first time since the U.S. initially became involved in Afghanistan in 2001, Americans are as likely to say U.S. military involvement there was a mistake as to say it was not.”

New York Times, today: “The Obama administration is preparing to carry out a campaign against the Islamic State in Iraq and Syria that may take three years to complete, requiring a sustained effort that could last until after President Obama has left office, according to senior administration officials.”

CNN, today: “Americans are increasingly concerned that ISIS represents a direct terror threat, fearful that ISIS agents are living in the United States, according to a new CNN/ORC International poll. Most now support military action against the terrorist group.”

(1) I’ve long considered this September, 2003 Washington Post poll to be one the most extraordinary facts about the post-9/11 era. It found that – almost 2 years after 9/11, and six months after the invasion of Iraq – “nearly seven in 10 Americans believe it is likely that ousted Iraqi leader Saddam Hussein was personally involved in the Sept. 11 attacks . . . .  A majority of Democrats, Republicans and independents believe it’s likely Saddam was involved.” 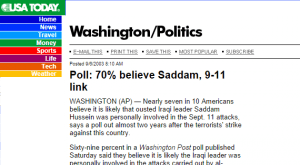 Is it even possible to imagine more potent evidence of systemic media failure than that (or systemic success, depending on what you think the media’s goal is)? But in terms of crazed irrationality, how far away from that false belief is the current fear on the part of Americans that there are ISIS sleeper cells “living in the United States”?

(2) If the goal of terrorist groups is to sow irrational terror, has anything since the 9/11 attack been more successful than those two journalist beheading videos? It’s almost certainly the case that as recently as six months ago, only a minute percentage of the American public (and probably the U.S. media) had even heard of ISIS. Now, two brutal beheadings later, they are convinced that they are lurking in their neighborhoods, that they are a Grave and Unprecedented Threat (worse than al Qaeda!), and that military action against them is needed.

It’s as though ISIS and the U.S. media and political class worked in perfect unison to achieve the same goal here when it comes to American public opinion: fully terrorize them.

(3) Although Americans favor military action against ISIS, today’s above-cited CNN poll finds that – at least of now – most do not want ground troops in Iraq or Syria (“61%-38%, oppose placing U.S. soldiers on the ground in Iraq and Syria to combat the terrorist group”). But almost every credible expert has said that airstrikes, without troops, is woefully inadequate to achieve any of the stated goals. Other than further inflaming anti-American sentiment in the region and strengthening ISIS, what possible purpose can such airstrikes have? The answer given by much of the U.S. media, as FAIR documented, seems clear: to “flex muscles” and show “toughness”: 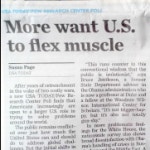 What kind of country goes around bombing people with no strategic purpose and with little motive other than to “flex muscles” and “show toughness”? This answer also seems clear: one that is deeply insecure about its ongoing ability to project strength (and one whose elites benefit in terms of power and profit from endless war).

(4) For those who favor air strikes: if, as most regional and military experts predict, it turns out that airstrikes are insufficient to seriously degrade ISIS, would you then favor a ground invasion? If you really believe that ISIS is a serious threat to the “homeland” and other weighty interests, how could you justify opposing anything needed to defeat them up to and including ground troops? And if you wouldn’t support that, isn’t that a compelling sign that you don’t really see them as the profound threat that one should have to see them as before advocating military action against them?

(5) For those who keep running around beating their chests talking about the imperative to “destroy ISIS”: will that take more or less time than it’s taken to “destroy the Taliban”?

(6) When I began writing about politics in 2005, it was very common to hear the “chickenhawk” slur cast about: all as a means of arguing that able-bodied people who advocate war have the obligation to fight in those wars rather than risking other people’s lives to do so. Since January, 2009, I’ve almost never heard that phrase. How come? Does the obligation-to-fight apply now to those wishing to deploy military force to “destroy ISIS”?

(7) It’s easy to understand why beheading videos provoke such intense emotion: they’re savage and horrific to watch, by design. But are they more brutal than the constant, ongoing killing of civilians, including children, that the U.S. and its closest allies have been continuously perpetrating?

In 2012, for instance, Pakistani teenager Tariq Kahn attended an anti-drone meeting, and then days later, was “decapitated” by a U.S. missile – the high-tech version of beheading – and his 12-year-old cousin was also killed by that drone. Whether “intent” is one difference is quite debatable (see point 3), but the brutality is no less. It’s true that we usually don’t see that carnage, but the fact that it’s kept from the U.S. population doesn’t mean it disappears or becomes more palatable or less savage.

(8) Here’s how you know you live in an empire devoted to endless militarism: when a new 3-year war is announced and very few people seem to think the president needs anyone’s permission to start it (including Congress) and, more so, when the announcement – of a new multiple-year war – seems quite run-of-the-mill and normal.

(9) How long will we have to wait for the poll finding that most Americans “regret” having supported this new war in Iraq and Syria and view it as a “mistake”, as they prepare, in a frenzy of manufactured fear, to support the next proposed war?

UPDATE [Tues.]: In case you’re wondering how so many Americans have been led to embrace such fear-mongering tripe, consider the statement last week of Democratic Sen. Bill Nelson of Florida:

“This is a terrorist group the likes of which we haven’t seen before, and we better stop them now. It ought to be pretty clear when they start cutting off the heads of journalists and say they’re going to fly the black flag of ISIS over the White House that ISIS is a clear and present danger.”

They’re a “clear and present danger” because they threatened to “fly the black flag of ISIS over the White House.” It’s hard to believe the fear-mongering is anything but deliberate.