How the UAE Tried to Silence a Popular Arab Spring Activist

Iyad el-Baghdadi, one of the Arab Spring’s most popular online activists, was arrested and expelled to Malaysia. Earlier this year, as a wave of counterrevolution and repression continued to roll back popular democratic uprisings across the Middle East, one of the Arab Spring’s most popular online activists found himself sitting in a jail cell.

Iyad el-Baghdadi, a popular blogger and Twitter personality who first came to prominence during the revolutions in Egypt and Tunisia, was arrested by authorities in the United Arab Emirates in April. Detained, imprisoned and then expelled from the country, he has been living in limbo in Malaysia ever since.

Baghdadi – a Palestinian refugee born and raised in the UAE – maintained a highly active social media presence during the revolutions which suddenly went quiet earlier this year, shortly after the death of his friend and well-known Egyptian activist Bassem Sabry. His last Tweet, about Sabry’s death, was on April 30th.

The very next day, he was summoned to an immigration office in the UAE, arrested, and told that he would be immediately deported from the country. “The morning I was arrested,” Baghdadi says, “I woke up still crying over losing him…I didn’t get to mourn him like everyone else.”

A UAE official simply told him, “You should try and remember if you said anything that might cause something like this.”

Despite his lifetime residence in the UAE, as a Palestinian citizen, Baghdadi had no recourse to contest this order. He could not be deported back to Palestine, so he was given a choice: indefinite detention or deportation to Malaysia. He chose Malaysia.

Baghdadi was imprisoned under difficult conditions for several weeks in the UAE before his deportation. Arriving at Kuala Lumpur International Airport on May 13th, he lacked even proper travel documentation or identification. Upon arrival, Malaysian authorities refused to grant him entry, forcing him to spend three full weeks living in the airport before the Palestinian embassy in the country convinced authorities to admit him as an exceptional case.

At no point during his ordeal was ever he charged with any crime, and the UAE immigration officials who conducted his expulsion informed him that there was no criminal complaint against him. But Baghdadi believes that UAE officials were upset over his online activism. Among other things, he maintained one of the most popular Twitter accounts in the country and had a large following both within the region and throughout the world. At the time of his arrest, and in response to questions regarding why he was being detained, he says a UAE official simply told him, “You should try and remember if you said anything that might cause something like this.”

Staff at the UAE embassy in the United States have not responded to a request for comment.

The UAE has dealt harshly with dissent and with proponents of civil liberties. Last year, the country sentenced 69 political dissidents to lengthy prison terms — 10 years, for most — on charges of plotting to “overthrow the country’s political system” in a mass trial marred by allegations of torture and violations of due process standards. “The UAE sees opponents and enemies at every turn,” says Nicholas McGeehan, a researcher with Human Rights Watch. “Iyad’s case is symptomatic of the UAE’s paranoia and its fear of critical thought and free speech.”

Though Baghdadi scrupulously avoided criticizing the country’s leaders directly, in the weeks and months leading up to his arrest he had become increasingly vocal about controversial aspects of UAE foreign policy. In particular, he had made strident criticisms of Egypt’s increasingly brutal, UAE-backed military dictatorship and its leader Abdel Fatah al-Sisi.

The coup that brought Sisi to power was supported by a triumvirate of the UAE, Saudi Arabia and Bahrain. Baghdadi believes that his critical commentary on this issue caused him to run afoul of local authorities, who had become increasingly worried about potential dissent over their policies.

It is worth recalling that while the Arab Spring and its activists were largely celebrated throughout the world, in regional dictatorships they have always been eyed with deep suspicion. News broadcasts in the UAE would refer to the uprisings themselves as “the so-called Arab Spring” or simply as a fitna — sedition. In this environment, a popular civil society activist such as Baghdadi might as well have been wearing a target on his back.

During the uprisings, Baghdadi became famous for creating the popular revolutionary hashtag #ArabTyrantManual and for providing the English translation of Egyptian activist Asmaa Mahfouz’s iconic YouTube speech calling for protests in Tahrir Square, which many credit with helping usher in the fall of then-president Hosni Mubarak. During the uprisings, his tweets and comments were referenced in publications like the The New York Times and The Guardian. 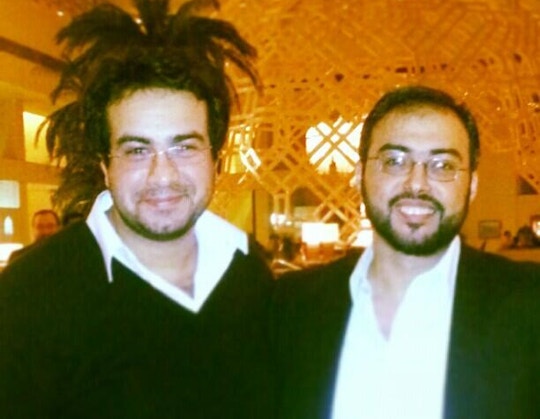 A vocal critic of both political Islamist movements and secular dictatorships, Baghdadi’s unique combination of humor and insight gained him a large and devoted online following.

H.A. Hellyer, a British Middle East expert and associate fellow at the Royal United Services Institute, a UK-based defense think tank, said of Baghdadi: “Like many people, I first met Iyad el-Baghdadi online — and was impressed by his consistency in criticizing various political forces, dependent on principle, rather than partisanship. That meant a great deal to many people throughout the region, as well as beyond.”

Baghdadi, whose wife was seven months pregnant at the time of his detention and deportation, has been stranded in Malaysia since his expulsion from the UAE. During this time, he has been largely separated from his family, who remained behind in the UAE, and was unable to be present at the birth of his first child. Exiled to live in a country where he has no legal status, with no permission to seek employment and no connections, he has been forced to rely on the financial support of friends and family to survive. Meanwhile, he has stopped speaking out online, a silence that is understandable, given how much of his family, for whom he fears retribution, remain behind in the UAE.

While Baghdadi has remained largely silent about his ordeal and has conspicuously disappeared from social media, he’s been appealing quietly to human rights groups and other nonprofits about his case. To this end, he is expected to give an address at the Oslo Freedom Forum human rights conference in Norway this week, his first appearance or public statement since his detention.

While he is keen to tell his story to the world, his trip will be bittersweet. His wife and young child were able to join him in Malaysia for the first time since his detention just this past week, and his trip to Norway means being separated from them again. “It breaks my heart to meet my family and then have to say goodbye to them after only three days,” he says. “But I am glad I got to see them, at least.”

Caught between an authoritarian government seeking to stifle dissent and the predicament of his own statelessness as a Palestinian, Baghdadi today remains in a precarious situation. An apparent victim of state retribution, his plight is in many ways a microcosm of the suffering endured by some of the Arab Spring’s most prominent activists, many whom have been exiled, imprisoned and even killed.

Despite this, Baghdadi remains steadfastly committed to his cause, saying:

Despite everything that I went through and all the pain caused to my family, I’m OK. The same can’t be said of the people languishing in the deportation chamber in Al Sadr prison in Abu Dhabi, or the people stuck in the airport for months and nobody hears about them, or the Syrian and Palestinian refugees living on the streets in Kuala Lumpur, or the people who never made it and are either killed back home, drowned trying to escape, or who are being tortured in jail…

If there’s something I want the world to realize, it’s that the Arab Spring is our only salvation… This I pledge to God, to my last breath, to my last heart beat, I will never be on the side of the tyrants.