The Newsroom: What to Do When the FBI Breaks into Your Encrypted Filing Cabinet In our ongoing quest to commit fearless acts of premium-cable-watching, we discuss this week’s The Newsroom.  In this episode: We confront our own relationships to OPSEC, ethics, and the radicalization of our favorite lunch item. Enjoy.

Peter Maass: Micah, as our security expert, if I am a flash drive or a senior editor and I want to hide, where should I hide when the FBI comes for me? Maass: The episode was very Assange-Manning w/r/t to SIPRNet and transferring data out of it.

Lee:  How does Neal know how to access and copy documents off SIPRNet, being a social media editor, yet his source doesn’t?

NVC: OK, so in this case, Neal is more like ASSANGE than Manning? BUT WHO IS ADRIAN LAMO?????

Lee: Adrian Lamo is their lawyer!  She gave horrible advice. First, she’s all like “you committed espionage” instead of “you’re innocent until proven guilty”—and they’re all assuming that the FBI is going to immediately know Neal’s role to begin with. When the FBI started raiding, she didn’t even look at the warrant. The FBI wanted to search all of the computers, which could compromise other sources. I think they could have fought the NSL privately before letting them begin the search. And there was way too much talking to the FBI without a lawyer in the room, and way too little calling in extra lawyers to stop the FBI from beginning their search.

Maass: Laying things out, Neal’s situation is a remix of four major journalist/whistleblower cases: 1) Neal getting reamed for helping his source extract docs—that’s Assange/Manning; 2) Neal being hounded as aiding or abetting his source, that’s mostly Rosen/Kim; 3) Neal facing trouble for not giving up the name of his source—that’s Risen/Sterling as well as Miller/Libby (Risen is a kickass journalist, btw); 4) Snowden being charged under Espionage Act. 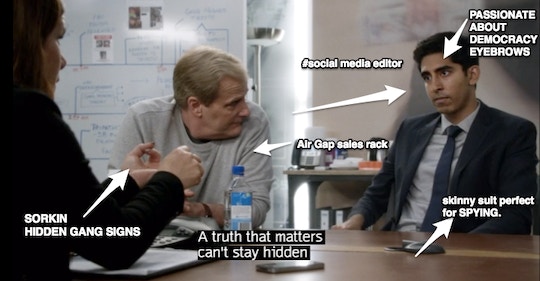 Lee: This is the section of the Espionage Act she is citing: Espionage Act, 18 U.S.C. § 793 (e) Whoever having unauthorized possession of, access to, or control over any document, writing, code book, signal book, sketch, photograph, photographic negative, blueprint, plan, map, model, instrument, appliance, or note relating to the national defense, or information relating to the national defense which information the possessor has reason to believe could be used to the injury of the United States or to the advantage of any foreign nation, willfully communicates, delivers, transmits or causes to be communicated, delivered, or transmitted, or attempts to communicate, deliver, transmit or cause to be communicated, delivered, or transmitted the same to any person not entitled to receive it, or willfully retains the same and fails to deliver it to the officer or employee of the United States entitled to receive it.

Maass: Word on the street is that DOJ wants to get Assange for helping Manning extract some data.

Lee: Yeah, they want to try to pin a conspiracy charge on Assange. I think for setting up an SFTP server and giving Manning access.

Maass: That crosses a line, as far as DOJ is concerned, because it means the journalist is helping the source purloin/steal info, as opposed to just receiving it.

Williams: So we are back to debate over whether Julian is a journalist. Love that one.

Maass: A ham sandwich can get indicted under the Patriot Act for crossing the street.

NVC: Yeah, but, why was that HAM SANDWICH TAKING TRIPS TO YEMEN????

NVC: Are we talking about radicalized ham sandwiches or moderate?

Maass: All ham sandwiches are radical. It’s in the ham.

Williams: Ham is being used by Israelis as a cover.

Williams: Is Neal for publishing the whole archive unredacted? That would be radical.

NVC: It was a throw-away line but Charlie said it would be irresponsible to upload all the documents a la Wikileaks.

Williams: That’s what Charlie said. But maybe Neal has other ideas.

Maass: Neal also entered co-conspirator and aid/abet realm by asking for specific documents (so that ACN wouldn’t have to hire “investigators” to look at all 27,000 documents; doesn’t ACN have “journalists” to do that? Or are they all in a Sorkin rom-com?) The DOJ got into hot water last year when it emerged that Fox News journalist James Rosen was mentioned in a search warrant as a potential co-conspirator and abettor, etc.

Lee: Oh and also, why did Neal break his iPhone and leave town? Does this mean he’s now a fugitive indefinitely until his legal troubles get sorted out? Is he on his way to the Ecuadorian Embassy?

Williams: He has to take a Greyhound to get there. I hope he doesn’t slip and use his Metro card.

Maass: Micah, what is the best way to destroy all data in an iPhone? If, for instance, someone scrawls “run” on a takeout menu?

NVC: At The Intercept all our memos come on menus.

Lee: The best way to destroy all data on an iPhone is to factory reset it. I think though he was breaking his phone because you can’t actually remove the battery from an iPhone. An alternative would have been to leave it at home, or in his office.

Maass: But leaving it at home means the feds could get their grimy hands on it and figure out whatever they can figure out (assuming it’s not iOS 8, which has disk encryption, right)?

NVC: Does that wipe out the cloud? Including all my JLaw-inspired nudes?

Lee: You use chemtrails to erase The Cloud.

Maass: And the factory reset—I don’t really trust it. Apple says it’s a full reset, but (and I’m not being  facetious here) can we really trust them on that? I wouldn’t bet my ACN on it.

Lee: That doesn’t wipe out what’s in the cloud. He would have to factory reset his phone first and then leave it home. Factory resetting an iPhone should in fact delete the crypto key that data is stored with and create a new one, making all the old data on the phone irrecoverable, even before iOS 8 (at least that’s what they claim, which I think is likely what they do). But cloud data would be a separate issue.

Lee: Smashing your iPhone to pieces on a dumpster also doesn’t delete your iCloud data. But I don’t think he even used it to talk to his source. I don’t think it had compromising data on it. I think he just didn’t want to be carrying a phone so his location wouldn’t get tracked.

Maass: Also, smashing computer equipment is an inexact way to destroy the data on it. When GCHQ wanted to physically destroy The Guardian‘s Snowden files, they did very precise things to very precise parts of the computer.

NVC:  For us plebians I thought the scene of the FBI putting their hands on all the newsroom’s files, computers, and coffee mugs felt appropriately violating.

Lee: Oh also, I’m not sure how Neal (and now Will) know the source’s name. If I were the source, I wouldn’t have given my name yet. Maass: Yes, bad OPSEC by the source, unless he/she planned to out himself/herself like Snowden.

Lee: Even so, Snowden didn’t tell Laura his name for 6 months after first contact.

Lee: I think ACN had a really cold argument that nothing they or Neal is doing is illegal. It’s perfectly legal for journalists to accept classified documents from sources. This is one of the ways media serves democracy.

Williams: Neal would get TEN DAYS of contempt. I don’t know where she got that number.

Maass:  Judith Miller was released after more than two months in the hole because her source released her from confidentiality.

Williams: I also think it’s a bad idea to take legal advice from an FBI special agent on a shooting range.

Maass: Here is the real life blabbing-on-train example of bad OPSEC by Michael Hayden aboard an Acela train outside Philadelphia and talking by phone with a reporter when Tom Matzzie, who was sitting nearby, recognized him. Matzzie heard Hayden insist to the reporter that he be quoted anonymously, as a “former senior administration official.” 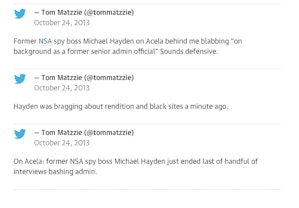 NVC: Would you guys have fired Meryl Streep’s daughter for her Ambien tweet? Is her tweet unethical or just in bad taste?

Lee: I just think the Republicans can’t take a little good-humored joke about them rejoicing over the Boston Marathon bombing.

Williams: Unethical if she was doing it for retweets.

Maass: I’d keep her on staff and fire the ham sandwich but it’s hiding in the filing cabinet.