Al Qaeda in the Arabian Peninsula has deployed social media operatives on Twitter to spread its message and to engage with its followers and critics alike. Despite U.S. government attempts to shut down its accounts, AQAP has proven effective at maintaining its own bizarro verification methods. 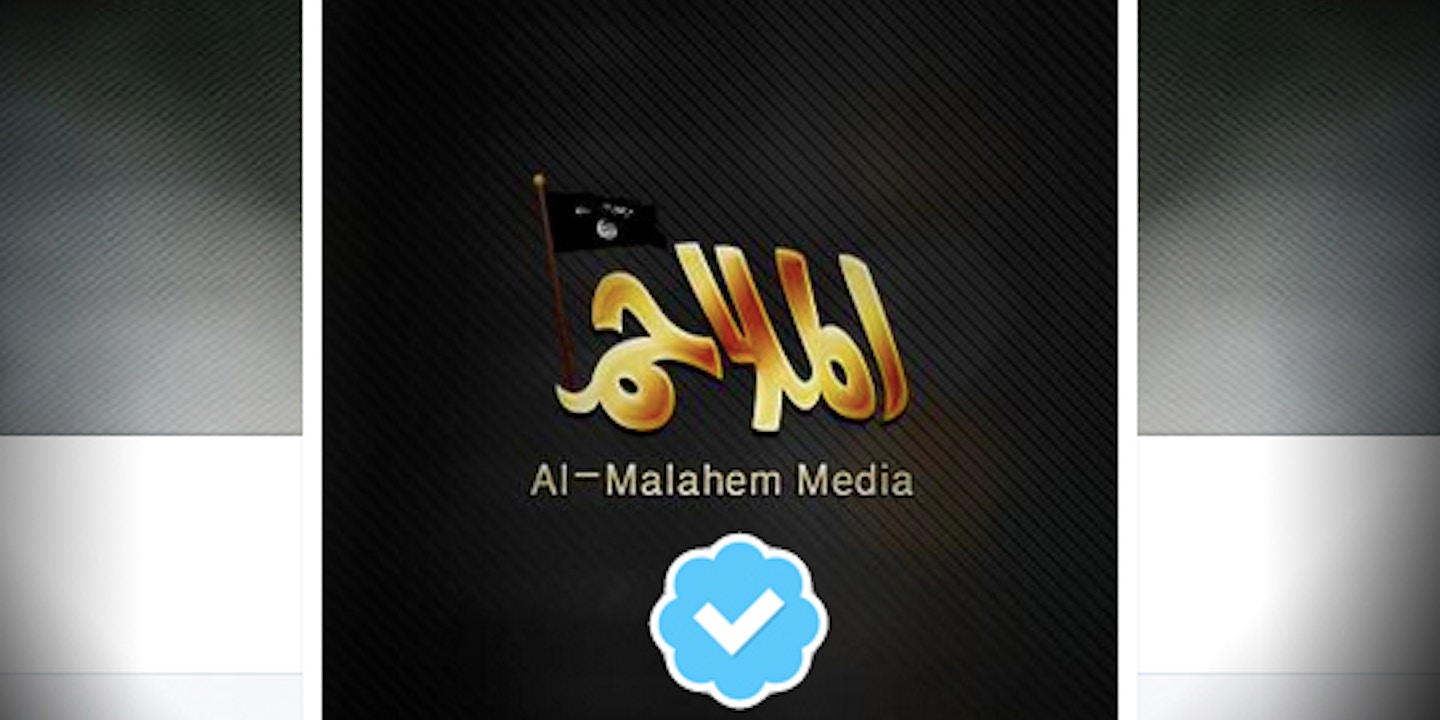 Over the past year, al Qaeda in the Arabian Peninsula has made a substantial shift in its communications strategy. For years, the group communicated through a methodical process that involved official statements issued through official websites, along with videos released by its media arm, al Malahem Media. Since early 2014, the group has deployed social media operatives on Twitter to spread its message and to engage with its followers and critics alike.

Under pressure from the U.S. government, Twitter regularly shuts down AQAP-affiliated accounts. AQAP, in turn, creates new ones—often just adjusting a twitter handle by one character. These accounts, of course, have no blue checkmarks to prove they are “validated” accounts, as many public figures and groups possess. Instead, AQAP has created its own system of verifying its Twitter accounts: publishing the handles through its official communication channels. For example, the group might draw up an online communique on an authoring and hosting site like JustPaste.it and include a list of Twitter handles underneath its various official pronouncements. This communique would then be posted on Jihadist web forums using accounts believed to be associated with AQAP. In other cases, AQAP might set up backup Twitter accounts and announce them through their current account before that account is shut down by Twitter.

“Whenever they get knocked down and create new [accounts], you know it’s them,” says Aaron Zelin, a specialist on jihadist movements at The Washington Institute. “Plus you can just tell from the quality and production value.”

It’s not as simple as a blue checkmark, but AQAP has proven pretty effective at maintaining its bizarro verification method.

I’m a Senior al Qaeda Official, Ask Me Anything

Two months before the massacre at the offices of Charlie Hebdo in Paris, social media operatives working with AQAP hosted their own version of a Reddit-style AMA (Ask Me Anything) on Twitter. They encouraged potential jihadists, fans and followers of AQAP, as well as international journalists, to submit questions (through Twitter) that would then be put to Sheikh Nasser bin Ali al-Ansi, the senior AQAP official who later became the public face of the group’s claim of responsibility for the Paris attacks. AQAP’s social media team even set up hashtags in Arabic and English: #ask_sheikh_Aansi. After fielding hundreds of questions — there were also lots of angry people spamming and trolling the hashtag, denouncing AQAP — the group did a staggered release of four videos. The videos answered questions from journalists, the general Twitter public, and al Malahem.

“It highlights how they are trying to engage individuals and followers in a way they hadn’t done previously,” says Zelin. “Usually, in the past, things like that happened in private forums, but this is a more of an open system.”

In the final video, al-Ansi asserted that, in many cases, it is better for jihadists in Western countries to conduct attacks domestically, rather than travel to Afghanistan, Somalia, Yemen or other war zones. That “shows that they are trying to be a bit selective in terms of having individuals come over to Yemen, almost having the cake and eating it too,” Zelin adds. If a plot happens that is inspired by AQAP, the group “wouldn’t necessarily have to put resources into it, but likely know the media would report it as AQAP, which could then help with recruitment and financing as well as prestige within the global community.”

When the final installment of the series was released earlier this week online, major television networks and other media outlets erroneously reported that al-Ansi was issuing a new threat after the Paris attacks when, in fact, the video was recorded prior to the massacre. Only one point from the video was reported in the media: that AQAP was calling on Muslims to conduct lone wolf terror attacks. But some of the other questions asked and answered provide key insights into the terrorist group’s current strategic thinking, particularly in light of recent events in Paris and elsewhere.

The Intercept translated the most recent video. Among the questions and answers were:

—Is it better to live under the rule of infidels or to emigrate? Do we have to leave [Western nations] or is it better to stay and to play an effective role [on behalf of the jihad]?

There is no doubt that leaving [a Western] county is better than living under the rules of the infidels. However, one important issue should be considered in that regard which is [the idea of] revenge. In other words, regarding the jihad of those individuals against the Western countries, where they reside: are they better able to do [a] revenge [attack] in one of the jihadi fronts? We might say: if he can work as an “individual jihadi” in Western countries [a lone wolf], in those countries who are fighting Islam, such as the United States, Great Britain, France, Canada, and other countries who are representing the leaders of infidelity in the war against Islam, and participating in this crusading campaign… If he can do this, it is better, and has greater [capabilities of] revenge.

—Why haven’t there been further AQAP attacks inside the US? Why don’t you move the war from Yemen to US soil?

Praise Allah, we have many good efforts outside Yemen, and our enemy knows that perfectly. He knows that so well that he closed more than 16 embassies around the world within recent years. We are preparing ourselves to fight them and we are planning to target them, and we are encouraging Muslims to do that as well. It is the duty of all Muslims, not only the duty of al Qaeda in the Arabian Peninsula. All the Islamic and Jihadi groups, who are able to attack them, should do their own part in targeting U.S. establishments and interests… By performing the Jihad and encouraging Muslims to do that, Allah will prevent the infidels’ harm. We are working on those great two approaches and Allah will show the results of those efforts hopefully. As for the future, we ask Allah to facilitate the good for us.

—Why did not we see any photos of Sheikh Anwar Al-Awlaki (the US-born radical cleric killed in a US drone strike in September 2011), after his death, rest in peace, after being killed?

They targeted the sheikh directly, so his body was torn into small pieces and those pieces were so small that they could not be photographed.

—Are the Abottobad documents (seized from Osama bin Laden’s compound) which were published by the Americans, authentic?

Yes, they are true. However, they are incomplete. We should consider that some of those letters are simply deliberations and discussions about some topics. The Americans did not publish the complete list of the letters. For example, in terms of speaking about the strategy in Yemen, there was discussions between Sheikh Osama and Dr. Ayman [al-Zawahiri, the current leader of al Qaeda globally], and [AQAP’s leadership, as well as Anwar al Awlaki]. The Americans only published the letter from Sheikh Osama, rest in peace, where he made a policy we were committed to during that period. That policy was talking about how we should work only domestically, seize the opportunity, build a strong Jihadi Group, and do outreach and target the American and Western establishments and interests. This letter is a little bit old and we had it in 2010, before the Arab revolution…. However, the “Abbottabad documents” is a school itself and we advise our brothers to read it to learn from what it has, in terms of knowledge and information. It has very important guidelines in many aspects: politics, Sharia law, mythology, the media, and all of them are important. They are advocacy messages, on a very high scale, and show how Sheikh Osama, and his brothers, were thinking. In addition, how they can measure things and how they can plan for the actions. It has some examples of the humanity and mercifulness of Sheikh Osama, rest in peace, and his compassion towards other Muslims in general as well as his long-term vision.

No, this is not true. Dr. Ayman is still guiding us. Even on small-scales issues. However sometimes there could be some misconnections in communication because of the evolving security circumstances

—What is the relationship between al Qaeda and the Islamic State (ISIS)?

Dr. Ayman [al Zawahiri] has talked about the nature of his relationship with [self-declared Caliph] al-Baghdadi in an audio address. This message is published online.

—Does AQAP believe that any Muslim who helps the Saudi monarchy is an apostate?

If the type of job he does to help the Saudi King is not a type of infidel act, we cannot say that he is an infidel. However, if that act was considered as an infidel act (such as aligning with the crusaders against the Muslims in their war, or committing a very clear infidel act); in this case, we start looking into his situation in general: whether the condition of calling him “an infidel” applies in his case.

—(“I want to apologize in advance for this question,” the anonymous facilitator asked al-Ansi on the video, before reading this question): Do you have any connections with Ali Abdullah Saleh [the former dictator of Yemen] as they said about you?”

This is not true and it is propaganda against us. It was said by the media to destroy the image of the Jihadists. We have talked about that in detail previously, so we will not discuss this.

There is no point listing any of the current AQAP-verified Twitter accounts. By the time this is published, they will likely have been suspended and resurrected at a different handle.