A Russian drone was shot down over the weekend during heavy fighting against separatist forces near the government-held port city of Mariupol in southeastern Ukraine. 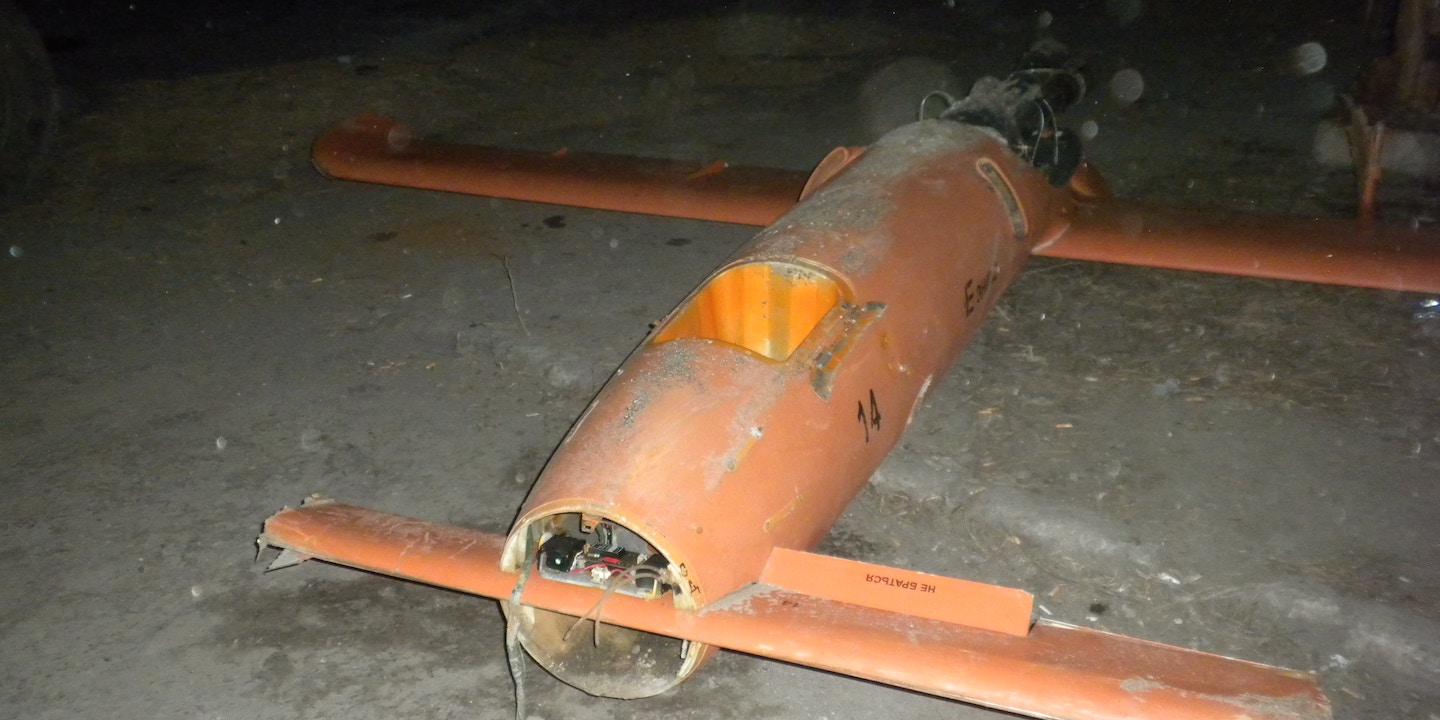 MARIUPOL, Ukraine — A Russian drone was shot down over the weekend during heavy fighting against separatist forces near the government-held port city of Mariupol in southeastern Ukraine, according to Ukrainian forces.

The drone was quickly identified as a Russian-designed and manufactured drone designated E08 by its manufacturer, the Enics company, whose logo and name appear in Cyrillic on its fuselage. The E08 was principally designed as a target for practice by Russian air and air defense forces, which explains why it is painted a highly visible orange color.

Members of Ukraine’s 37th Mechanized Battalion, who brought down the drone, saw it crash into the Azov Sea, fringing the conflict zone. It then took two days to locate, haul out of the water and transport to their base on the outskirts of Mariupol.

The drone was shot down on Saturday, just hours before a ceasefire intended to halt fighting between Russian-backed separatists and Ukrainian forces.

“The presence of these drones is just one more bit of proof that Russia is supplying equipment and weapons to the separatists,” said the battalion’s deputy commander, whose nom de guerre is Artem. “The only place they can get these from — and there are many Russian drones at work in this conflict — is from Russia. Moscow also supplies the operators for these drones as they’re too sophisticated for the separatists themselves.”

One of the battalion’s men, who saw the drone flying over the battlefield on Saturday and was involved in its recovery, said that Ukrainian forces opened fire using a variety of weapons. “From the type of shrapnel damage to the engine exhaust, it looks to me like it was probably a hand-held surface-to-air missile that hit it,” he said.

The drone was recovered about 50 feet from shore in shallow water.

Ukraine has been developing its own small unmanned aircrafts, but Russia’s defense industry is several years ahead and there have been previous reports that separatists forces have been using Russian-supplied drones in the conflict.

The drone that was shot down has a range of 93 miles and 30 minutes flying time; it can fly up to 186 miles per hour and up to an altitude of 9,842 feet; its fuselage is over 13 feet and its wingspan is over 16 feet. When it was unveiled at Russia’s international aviation and space products showcase, the MAKS 2009 Airshow, the Enics company said that the drone could also carry TV and photographic equipment to adapt it for surveillance use.

A source connected with the Russian defense industry confirmed to The Intercept that the drone pictured was the Russian-built E08. But the source, who asked not to be identified because he was not authorized to speak on the record, said the drone “was used as an aerial target and shot down at Eisk military range on the Russian side of the Azov sea two weeks ago.”

The Ukrainian side, however, said the drone was being used for reconnaissance and equipped with a camera.

“The photographic apparatus, which was housed in the nose, was seriously damaged when the drone was brought down,” Artem said. “But in any case, pictures are transmitted to the remote operator, rather than recorded onboard on a hard disk.”

Separatists use the drones during artillery bombardment to spot the location of Ukrainian forces, according to Artem. “We see these drones spotting our locations and then a little later, we are targeted by artillery,” he said.