Top Lobbyist: 2016 To Be “Bumper Year” Thanks to Clinton Campaign 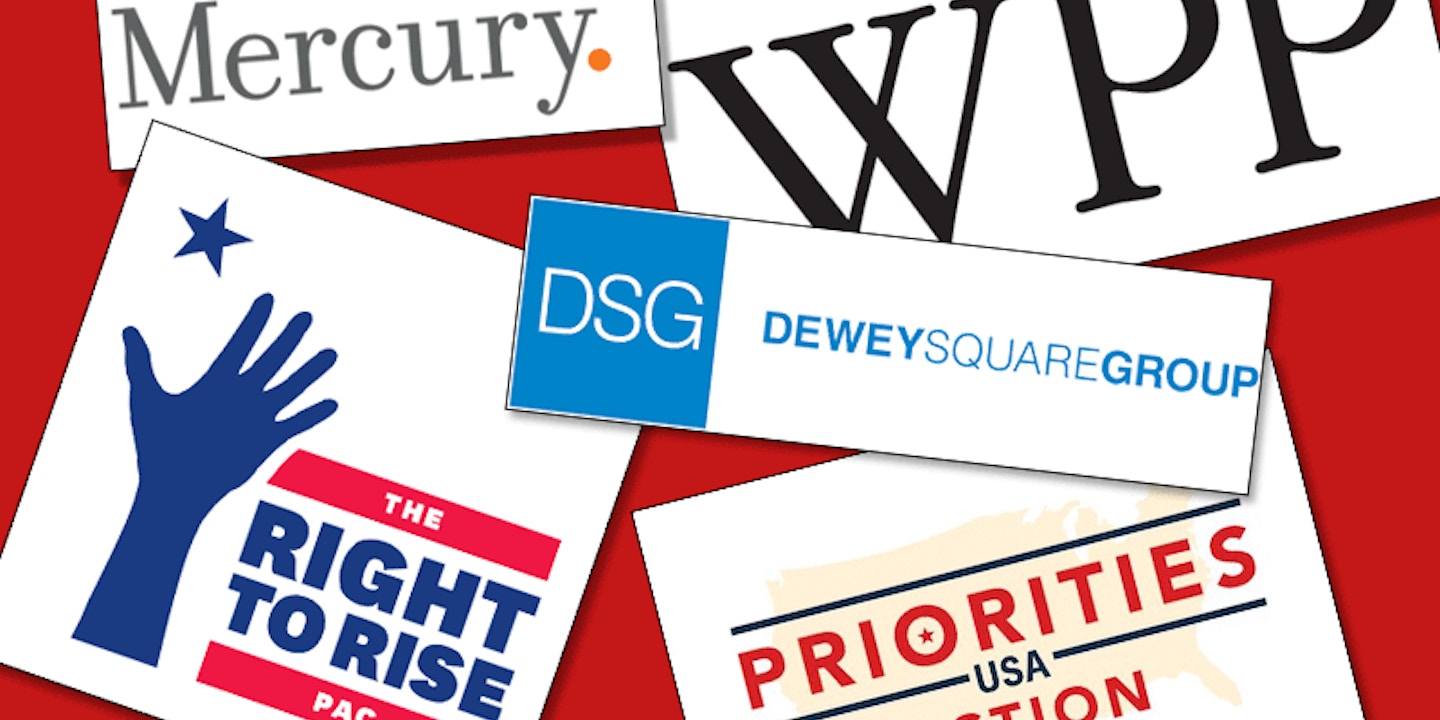 At one presentation, a UBS analyst asked Sir Martin Sorrell, head of the London-based lobbying and advertising mega-firm WPP Group, if he foresaw anything noteworthy for WPP’s future financial prospects.

Yes, responded Sorrell: “2016 should be a bumper year as Hillary Clinton wins the election here.”

Sorrell’s confidence in the profitable possibilities of 2016 is justified: American political operatives employed by the WPP Group are deeply involved in lining up support for the former secretary of state’s nascent presidential campaign. The Super PAC Ready for Hillary is being closely advised by Craig Smith, who is employed by WPP-owned PR firm Penn Schoen Berland. Hillary’s “shadow campaign” is reportedly being organized by executives from the WPP-owned political affairs and lobbying shop Dewey Square Group. And the managing director of the Glover Park Group, a D.C. lobbying firm purchased by WPP in 2011, has also organized fundraising efforts.

A similar dynamic is playing out on the other side of the aisle, with lobbyists seizing management roles in the campaigns of leading GOP contenders and the Super PACs backing them.

Similarly, Jeb Bush’s Super PAC, Right to Rise, was founded by Charlie Spies, a lobbyist for the casino giant Wynn Resorts. And Sen. Marco Rubio’s Reclaim America PAC is managed by his former chief of staff, Cesar Conda, who has returned to the private prison lobbying firm he founded, Navigators Global.

“There is no doubt that outside organizations — PACs, Super PACs, etc. — wield enormous influence over both candidates and voters,” says Jessica Levinson, clinical professor at Loyola Law School in Los Angeles. “Because money flows so freely throughout our political system, I think the important thing at this point is for there to be thorough transparency about who these lobbyists are, and the interests that they work for.”

Some consulting firms involved with the 2016 race are required by the federal Lobbying Disclosure Act to disclose their clients, because they engage in direct lobbying of legislative and executive branch officials. BGR Group lobbyist Jonathan Mantz is guiding the fundraising for Priorities USA, a pro-Clinton Super PAC, while simultaneously lobbying for interests such as Comcast, Chevron, the Republic of India, the Kurdish Regional Government and the Thai Royal Embassy. Similarly, Glover Park Group’s Susan Brophy has fundraised for Ready for Hillary while serving as a paid representative of JPMorgan Chase, Verizon and the Egyptian government of Abdel Fattah el-Sisi.

Mercury LLC, the firm from which both Christie and Walker have recruited campaign operatives, represents firms including Sallie Mae, eBay, Alcoa, Air Canada and as of last month, the Qatari government. (Pierre Omidyar, founder of The Intercept’s parent company, First Look Media, is the chairman of eBay.)

However, firms such as the Glover Park Group, which solely engage in “astroturf” lobbying — the organizing of grassroots groups on behalf of corporate interests — are not required to disclose their clients.

Speaking recently with The Hill, uber-lobbyist Tony Podesta predicted that “whoever the next president is will not maintain the lobbyist ban” instituted by President Obama — a ban, he noted, that has already crumbled under the weight of numerous exemptions and waivers. It’s not hard to see that happening, given that the shadow campaigns are already managed by lobbyists.