A mall “intelligence analyst” used a fake Facebook account to monitor local Black Lives Matter organizers, according to documents obtained by The Intercept. Documents obtained by The Intercept indicate that security staff at the Mall of America in Bloomington, Minnesota used a fake Facebook account to monitor local Black Lives Matter organizers, befriend them, and obtain their personal information and photographs without their knowledge.

Evidence of the fake Facebook account was found in a cache of files provided by the Mall of America to Bloomington officials after a large Black Lives Matter event at the mall on December 20 protesting police brutality. The files included briefs on individual organizers, with screenshots that suggest that much of the information was captured using a Facebook account for a person named “Nikki Larson.”

Metadata from some of the documents lists the software that created them as belonging to “Sam Root” at the “Mall of America.” A Facebook account for a Sam Root lists his profession as “Intelligence Analyst at Mall of America.” 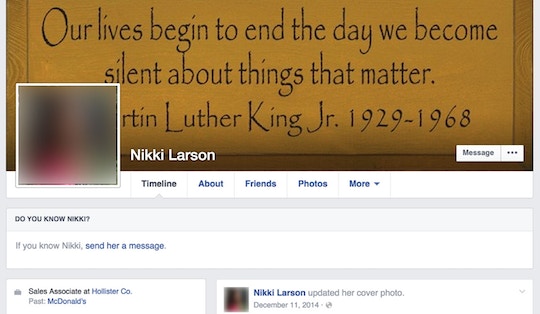 The fake Larson account featured a profile photo that a Google reverse image search shows is identical to a photo associated with a woman who is Facebook friends with Root.

The account, previously found at this url, was deleted soon after The Intercept contacted the Mall of America for this story.

On December 11, as news of the planned Black Lives Matter protest began to spread, the “Nikki Larson” account was updated with a banner image of an (apocryphal) Martin Luther King Jr. quote: “Our lives begin to end the day we become silent about things that matter.” At some point, the Larson account “liked” the Black Lives Matter Minneapolis Facebook group.

After the December 20 protest, the city charged 11 protesters with six different criminal misdemeanors. The city and mall are seeking over $65,000 in restitution for police and mall expenses.

“We don’t like the idea of large corporations spying on people for their political activity,” says Jordan Kushner, one of the attorneys for the activists being charged by the city. Kushner, who has represented many other protest groups in the Twin Cities region, observed that such surveillance tactics appear to be part of a “growing, disturbing trend.”

The Mall of America declined to answer any questions about the Larson Facebook page.  Reached for comment, Root said he ended his employment with Mall of America on January 27. Asked about the Nikki Larson page and the Black Lives Matter protest, Root said, “I can’t answer anything about that because it’s a case.”

Information collected from Facebook was used by the Mall of America security team to build dossiers on each activist. A document on Nekima Levy-Pounds, one of the activists charged by the city, includes screen grabs of  her Facebook account. Levy-Pounds, professor of law at the University of St. Thomas, told The Intercept that the Larson account befriended her in December.

Another dossier profiling activist Lena Gardner contains pictures, a timeline listing where to spot her in videos from the protest taken by protestors and by Mall of America security, as well as information scraped from her social media accounts. Similar documents were created for at least eight other activists.

The Larson account appears to have been created in 2009, and had 817 friends, many of whose pages showed they were involved in Minnesota political activism. The account also “liked” Facebook groups associated with Ferguson activists, the American Indian Movement Interpretive Center, Occupy Minneapolis, SumOfUs, the SEIU Minnesota State Council, and Communities United Against Police Brutality, among others.

Jim Lukaszewski, a crisis communications expert at Risdall Public Relations, profiled efforts by mall security to carefully track political protesters. In a case study posted on the Risdall website titled “Fulminating Flash Mobs,” Lukaszewski explains how mall security responded to a flash mob dance by Idle No More, a Native American rights group. “Facebook, Twitter and Google Plus were being aggressively monitored using Topsy, Monitor, and Kurrently,” the case study claims, noting that arrest kits were prepared in an area “hidden from public view to avoid antagonizing the crowd.”

The case study lists Root as a contact for the mall on “security related management questions,” and features a blurb from him: “If it’s a political movement, it is very important to know all of the subgroups and players involved and take everything they say very seriously.”

“I was not surprised to hear of their surveillance,” says Gardner. “We are standing up for communities of color against unnecessary harassment, over-policing, and excessive force at the hands of law enforcement. This type of invasion of privacy based on presumed criminality of people of color is the very thing we are standing up against.”

“They should be ashamed of themselves, along with the Bloomington City Attorney’s office. They are being ruthless in their attempts to quell and stifle free speech and dissent,” said Levy-Pounds.

According to a 2011 investigation by NPR and the Center for Investigative Reporting, featuring reporting from The Intercept’s Margot Williams, the Mall of America created its own private counterterrorism unit called Risk Assessment and Mitigation, or RAM. The report found that the unit had adopted aggressive procedures to pursue mall patrons, often for ordinary behavior. One Pakistani-American named Najam Qureshi was questioned by the FBI after his father had left a cellphone on a Mall of America food court table, prompting the counterterrorism unit to report the father to local authorities, who relayed the incident to the federal government, which then sent an investigator to Qureshi’s home.

The Intercept filed a request for Bloomington interactions with the Mall of America, but many of the documents concerning the Mall of America surveillence effort were uncovered by Tony Webster, a software engineer and data researcher with an interest in public records surrounding law enforcement.

“‘The place for fun in your life’ is the Mall of America’s slogan,” says Webster, “which doesn’t align with the Mall creating a fake Facebook account to stalk activists; it doesn’t align with my memories of a fun place to go as a kid. I’m sympathetic to the Mall’s everyday task of ensuring safety, but this violation of privacy went too far, as did Mall management’s pushing for harsh criminal prosecution of peaceful demonstrators.”

Correction: This article has been updated to clarify that Mall of America is not a client of Risdall Public Relations.