Omar Khadr, Once Guantánamo’s Youngest Prisoner, Finally Out of Jail

A judge today ruled that Khadr should be released from a maximum security prison in Edmonton, Alberta, while he appeals his conviction for killing an American soldier. 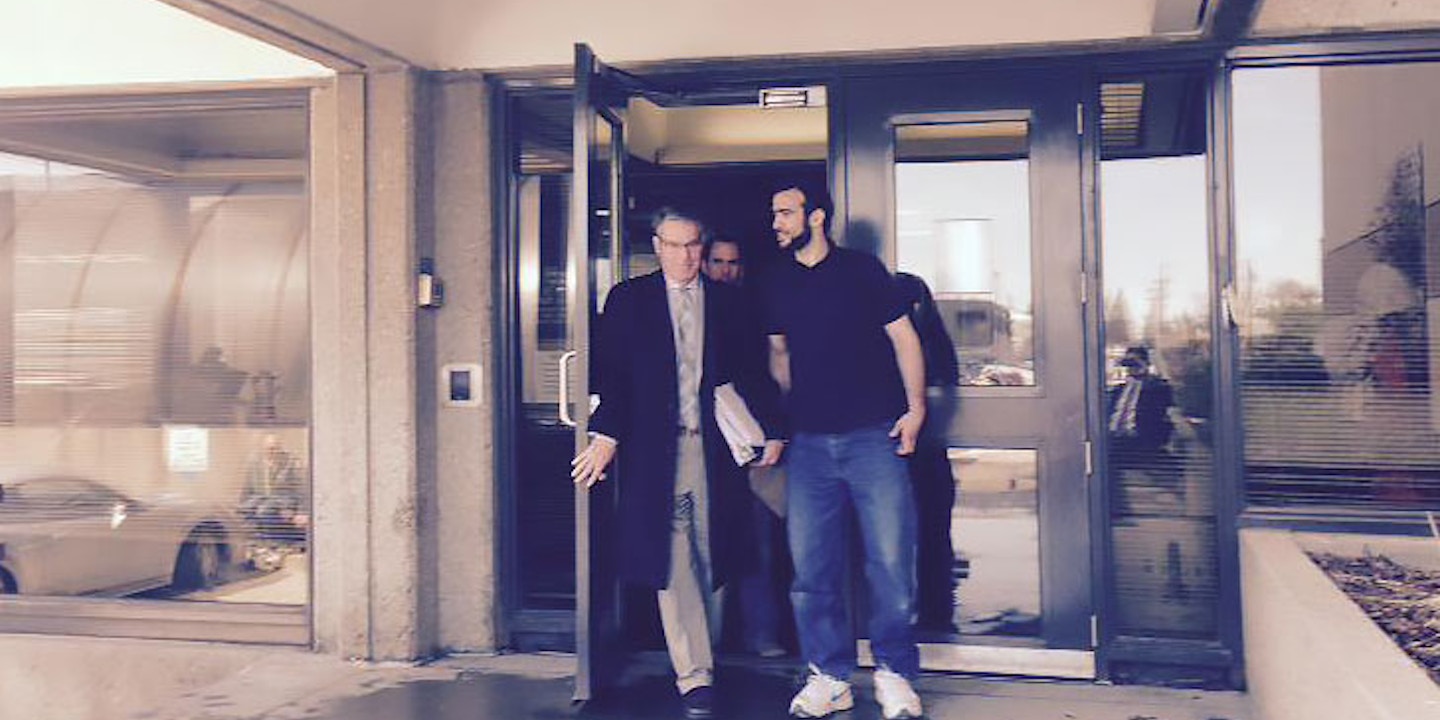 Omar Khadr, a Canadian citizen who was once the youngest inmate held at Guantánamo Bay, was today let out on bail from a Canadian prison — walking free for the first time since he was captured by U.S. forces when he was 15 years old. A judge today ruled that Khadr should be released from a medium security prison near Edmonton, Alberta, while he appeals his conviction for throwing a grenade that killed an American soldier during a raid near Ayub Khel, Afghanistan in 2002.

Khadr, who spent nearly 10 years at Guantánamo, will live with his lawyer, Dennis Edney, and Edney’s wife. “I look forward to Omar Khadr letting the Canadian public see who he is,” Edney said outside the courtroom after the judge’s decision was rendered.

Who Khadr is has been a subject of intense political debate in Canada and abroad. The right-wing Canadian government of Prime Minister Stephen Harper has vociferously opposed Khadr’s release for years, characterizing him as a hardened and unrepentant terrorist guilty of war crimes. The Harper government fought until the last moment to prevent Khadr from leaving prison, even applying for an emergency stay of bail on the grounds that his release would harm relations with the United States, a charge the U.S. State Department publicly denied.

In the aftermath of the decision, which finally thwarted years of government attempts to keep Khadr behind bars, Public Safety Minister Steven Blaney expressed disappointment with the ruling, lamenting the release of a “convicted terrorist.”

To many, however, Khadr is not a terrorist but a long-abused child soldier. Born in Canada in 1986, Khadr spent his childhood in the suburbs of Toronto before being taken by his now-deceased father, Al Qaeda financier Ahmed Khadr, to Afghanistan in the late-90s. Brought into the orbit of militant groups at a young age, Khadr’s life would take a further turn for the worse following the 9/11 attacks and subsequent U.S. invasion of the country.

In later years, videos would surface of Khadr as a young boy being taught by militants how to construct rudimentary landmines with which to target U.S. troops. In July 2002, a house he was residing in would be the target of a U.S. military raid that killed several militants and grievously wounded Khadr, who suffered several gunshot and shrapnel wounds throughout his body before being captured. Sgt. Christopher Speer, a U.S. army medic, would die in that raid, hit by a grenade dubiously alleged to have been thrown by Khadr as he lay wounded.

Following this incident, Khadr was transferred first to the American prison at Bagram Airbase in Afghanistan and then to the prison at Guantánamo Bay. In both places, he is alleged to have suffered torture by prison guards and interrogators, including beatings, denial of medical care for wounds, sleep deprivation and various other forms of humiliation and physical mistreatment.

His chief interrogator at Bagram, Joshua Claus, would later be charged in connection with the deaths of several Afghan civilians who were tortured and killed at the camp.

Moazzam Begg, another former Guantánamo prisoner who knew Khadr at the prison, recalled his impression of him in a 2012 interview: “He looked like a child. Very skinny, gaunt, pale, weak, quiet, shy. Soldiers would scream insults at him, with his hands tied and his legs tied and a hood over his head.”

Despite his young age, and despite being a native-born Canadian citizen, the Canadian government never advocated for Khadr’s release from Guantánamo. Unlike representatives of other Western governments that found their citizens incarcerated at the notorious prison camp, Canadian officials not only declined to proffer him help but even participated in his interrogations. In a videotape of one of his Guantánamo interrogations led by agents of the Canadian Security Intelligence Service in 2003, Khadr tells his interlocutors of his torture at Bagram and asks them to “promise me you’ll protect me from the Americans.”

After it became clear the CSIS officials had no intention of either protecting him from further abuse or extricating him from the island prison, Khadr, then 16, began to weep and call out for his mother. When the agents subsequently accused him of crying to avoid complying with their interrogation, he tells them between sobs, “You don’t care about me.”

Khadr would remain at Guantánamo for nearly a decade after this episode. Blind in one eye due to injuries first suffered in 2002, Khadr’s physical and mental condition continued to deteriorate over the years. Damien Corsetti, an interrogator at Guantánamo who earned the nickname “The Monster” and who was later also reprimanded for prisoner abuse, knew Khadr during his time there, and felt compassion for the young prisoner. “He was a 15-year-old child who’d been blown up, shot, grenaded,” Corsetti testified at Khadr’s 2010 military commission hearing. “He was probably in one of the worst places on Earth. He was in the wrong place for a 15-year-old child to be.”

Though he maintained that he had no recollection of the 2002 raid, Khadr would ultimately plead guilty at a 2010 military commission hearing to throwing the grenade that killed Sgt. Speer. Characterizing his confession as the only possible means he saw of escaping Guantánamo, Khadr was sentenced to an additional eight years in prison. His case represented the first war crimes prosecution of a child combatant since World War II, and the first ever in U.S. history.

In 2011, Khadr was transferred from Guantánamo Bay back to Canadian custody. However, unlike most other Western countries whose citizens were repatriated from Guantánamo, Canada kept Khadr imprisoned,  as the government insisted on enforcing the sentence imposed by the widely discredited military commission. He has been shuttled around various prisons in Canada since, while the hawkish Conservative government has fought to keep him behind bars, touting their stance as being tough on “terrorists.”

These efforts finally came up short yesterday. After the judge’s ruling, Edney, Khadr’s longtime lawyer, vociferously criticized the Canadian government’s handling of his case in a statement given outside the courthouse. “I followed that child to a grown man,” said Edney. “[Prime Minister Harper] wants to show he is tough on crime and who does he pick on? A 15-year-old boy who was picked up and put in the hell hole of Guantánamo.”