Roman Catholic nun who met with Dzhokhar Tsarnaev several times since marathon bombing says that he has privately expressed deep remorse for the victims of his crime. 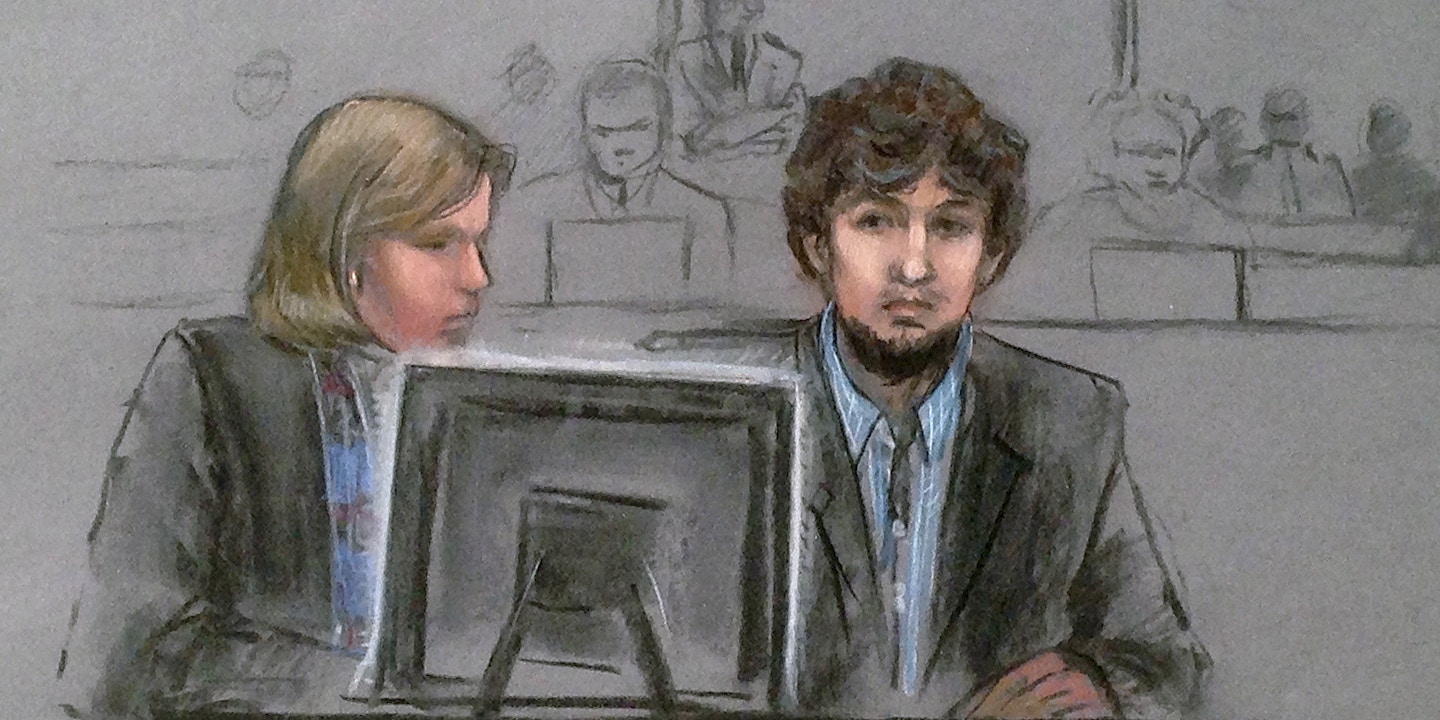 Sister Helen Prejean, the Roman Catholic nun whose relationship with death row prisoners was dramatized in the 1993 film Dead Man Walking, testified today as the final defense witness at the trial of Boston Marathon bomber Dzhokhar Tsarnaev. Her testimony, while brief, offered the first answer to one of the enduring questions about Dzhokhar’s role in the crime: Does he feel remorse?

“No one deserves to suffer like they did,” Tsarnaev told Prejean, according to her testimony, on one of several visits she has made with him over the past several months. “He lowered his eyes … his voice, it had pain in it,” Prejean said, describing Tsarnaev’s feelings of guilt over the harm he had done to the marathon bombing victims. “He said it emphatically … I had every reason to believe he was sincere.”

Since his arrest, Tsarnaev has been held under highly restrictive “special administrative measures” that have limited his communication with the outside world. In recent years, federal authorities have imposed such restrictions in high-profile terrorism cases in an attempt to prevent defendants from issuing statements to the public. In Tsarnaev’s case, the special administrative measures and his decision not to testify in his own defense — which is exceedingly common in capital cases — have combined to leave his feelings about his crime a mystery.

As a clergywoman, Prejean was permitted to meet with Tsarnaev despite the special restrictions imposed on him. Her resulting testimony about Tsarnaev’s remorse contradicted widespread public speculation that Tsarnaev has been unrepentant about the bombing he conducted with his deceased older brother. His posture in court seemed to buttress the testimony: Tsarnaev looked at Prejean throughout her testimony, and she, in turn, paused to smile at him at certain moments. When she described his feelings of remorse and shame, Tsarnaev bowed his head toward the table in front of him.

Following Prejean’s testimony, defense counsel rested their case in the sentencing portion of the trial. Having already been found guilty on 30 counts related to the 2013 marathon bombing, Tsarnaev’s defense team is now fighting only to spare him the death penalty for his role in the attack. Arguing that he will face “unrelenting punishment” while serving a life sentence at the ADX Supermax facility in Florence, Colorado, his lawyers have sought to describe execution as an inappropriately harsh sentence given his age and degree of involvement in the plot relative to his deceased older brother, Tamerlan. Jurors are expected to begin their deliberations on his sentence next week.

The strategy of Tsarnaev’s lawyers throughout the sentencing phase has been to portray Tamerlan as the primary actor in the bombing. At the same time, the defense team has sought to humanize their client through the testimony of those who knew him personally and can give insight into his thoughts and character.

Last week, in the midst of her testimony at the trial, Tsarnaev’s former college friend, Alexa Guevara, 21, broke down and wept on the stand while recalling her memories of Tsarnaev. Fighting to compose herself, she told the court she was crying because, “I really miss the person that I knew. He was a good friend.” Describing how, after seeing her sketchbook one day, Tsarnaev had encouraged her to apply for art school, Guevara said, “He told me I have talent, and I shouldn’t let it go to waste. He made me feel like somebody believed in me.”

The testimony of Guevara and of other friends, relatives and teachers who knew Tsarnaev has helped paint a more complex portrait of the defendant than the callous, middle-finger waving, aspiring jihadist the press has commonly depicted. Indeed, in spite of the bombing, many of the people whose lives actually intersected with Tsarnaev’s appear to have loved him.

In a Facebook posting after her testimony last week on behalf of Tsarnaev, his former middle school teacher, Becki Norris, wrote, “I’ve discovered the painful truth that when you care deeply for someone, that doesn’t stop even if they do unfathomably horrible things.” Speaking of her enduring affection for Tsarnaev, whom she had known since childhood, she said, “Yes, he did the unforgivable. And yes, I still love him. And — this one is hard to fathom, I know — he still needs love.”

A former coach on Tsarnaev’s high school wrestling team dissociated the boy he knew from the one now on trial for his life in the bombing case, testifying last week that he was simply not “the same Dzhokhar that I knew.”

In her testimony today, Prejean described Tsarnaev as respectful and apparently sincere in his interactions with her. “The first time I met him, I thought, oh my God, he’s so young,” Prejean said. “We talked about his crimes. I thought he was genuinely sorry for what he did.” Adding that she had not been paid “one dime” for her testimony, Prejean testified, “I would not tell the jury Dzhokhar was remorseful if I didn’t really believe it.”