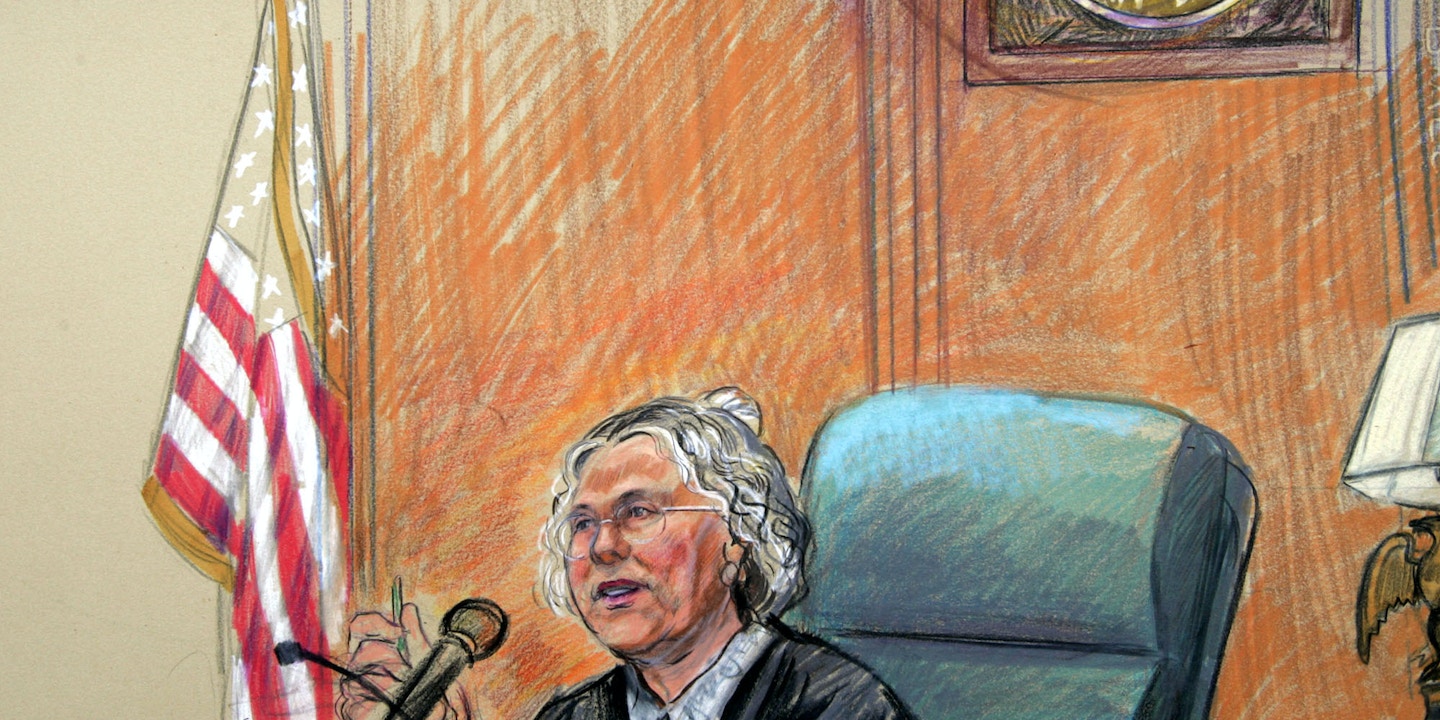 Nearly a decade ago, at a federal courthouse in northern Virginia, Judge Leonie Brinkema set a new standard for taking a tough stance against people who inflict harm on America.

She presided over the lengthy trial of Zacarias Moussaoui, who was convicted as a co-conspirator in the 9/11 attacks against America. The jury decided he would spend the rest of his life in prison, and when the sentence was formally issued, Brinkema told Moussaoui, “You will die with a whimper.” He tried to interrupt, but she would have none of it. “You will never get the chance to speak again, and that’s an appropriate ending,” she said sternly.

In the same courthouse this week, Brinkema listened intently as a government lawyer argued that Jeffrey Sterling, a former CIA agent convicted of leaking classified information to a New York Times reporter, had caused grave damage to national security and should be sentenced to a long term in prison, saying his actions were “unconscionable” and constituted a “substantial and costly blow to our intelligence efforts.” In its legal briefs, the prosecution had asked for a “severe” sentence that many observers regarded as being in line with federal guidelines for at least 19 years behind bars.

In a surprising turn, Brinkema sentenced Sterling to just three and a half years in prison, which is a long time to be deprived of liberty but nothing like two decades. She told the courtroom that Sterling had done what no intelligence officer should do, disclosing the identity of a covert asset. But she made no mention of the prosecution’s claim that he caused significant harm to national security. That omission, combined with a sentence far below the prosecution’s request, strongly indicate she didn’t believe the government’s dire warnings.

“The Sterling sentence certainly contained an implicit rebuke to the prosecution,” said Steven Aftergood, who directs the Project on Government Secrecy at the Federation of American Scientists. “By ordering the sentences for each of the nine felony counts against Sterling to run concurrently, Judge Brinkema was declaring in effect that Sterling had been overcharged.”

“I do think that the court largely rejected the government’s view of the harm that was caused by the leak in this case,” he told The Intercept. “By claiming that this was one of the greatest leaks and threats to national security, the government simply overplayed its hand and I think the judge did not agree with that assessment.”

The sentence appears to be a blow to Obama’s broader crackdown on leakers and whistleblowers, solidifying a trend in which the government has failed, with the notable exception of Chelsea Manning, to get lengthy prison terms against people who are portrayed in prosecution filings as severely damaging national security. The sentences handed out recently — 13 months to Stephen Kim, a former State Department official, and 30 months to John Kiriakou, a former CIA officer — have been widely criticized as unjust and have been disastrous for the men involved, but they are not the sort of lengthy sentences handed out to major criminals.

One of the much-criticized characteristics of the crackdown — its selectivity — is showing signs of coming back to haunt the government, too. Primarily mid-level officials whose leaks embarrass the government have been targeted with prison terms while senior officials who are friendly to the administration are untouched or slapped on the wrist. The plea deal with former general and former CIA director David Petraeus is a recent example — Petraeus admitted to sharing classified information with his biographer and then-girlfriend, Paula Broadwell, but was allowed to plead guilty to just a misdemeanor and avoided any time in jail.

Judge Brinkema did not mention Petraeus by name on Monday, but she hinted at his case in a remark that the justice system has to be fair. Aftergood, in an email to The Intercept, noted that “every case and every ruling perturbs the environment in which later cases are brought,” adding that “the Petraeus outcome may have worked subterraneously to Sterling’s benefit.”

Sterling’s sentence has begun to draw attention. In an editorial today, The New York Times described Brinkema’s decision as a “significant rebuke to the Obama administration’s dogged-yet-selective crusade against leaks.” That view was echoed by national security journalist Marcy Wheeler, who wrote of Sterling’s sentence, “The government’s insistence that whistleblowing and accountability equate to spying is coming under increasing scrutiny, even mockery.”

The criticism is coming from all sides. Jack Goldsmith, a Harvard Law School professor and former assistant attorney general and special counsel to the Department of Defense, last week chided the government for hyping the damage caused by leaks. In a speech that focused on how the intelligence community should react to the disclosure of secrets, he noted that officials had been “jeopardizing vital credibility through exaggerated claims about the national security harms of disclosure.” He also called for the intelligence community to “rethink, really rethink, the pervasive resistance to public disclosure of any aspect of any intelligence operation.”

When the Obama administration began its war on leakers and whistleblowers in 2009, there was little precedent for trying to put leakers into prison. The series of leak cases brought by the administration under the draconian Espionage Act — more than all previous administrations combined — gave the impression of a crackdown to end all crackdowns. Instead, if Brinkema’s rebuke is an indication, it risks becoming the crackdown without clothes — an effort to imprison officials who have done no harm, and perhaps some good, because leaks often put into the public domain information that the public should know.

Of course the government has gotten a lengthy sentence for one leaker — Manning, formerly known as Bradley Manning, was sentenced to 35 years for sharing a trove of military and diplomatic cables with Wikileaks. And Espionage Act charges have been filed against Edward Snowden, who leaked thousands of NSA documents. But Brinkema’s decision could give the government cause to reconsider the scope of its crackdown.

“I hope it makes them more reluctant to file these cases,” Pollack said. “An inordinate amount of resources went into this case. At the end of the day, what the government had was a circumstantial case that it ultimately was able to sell to the jury, but they did not get the type of sentence that they thought that they might get. As a taxpayer, I would certainly question whether the needs of national security really required the government throwing these kinds of resources at Jeffrey Sterling over a leak that occurred years ago, on a program that I think was of questionable value.”

The Department of Justice, contacted by The Intercept, did not provide any comment.

Update: Wording has been added to clarify that the prosecution did not specify what would constitute a “severe” sentence.