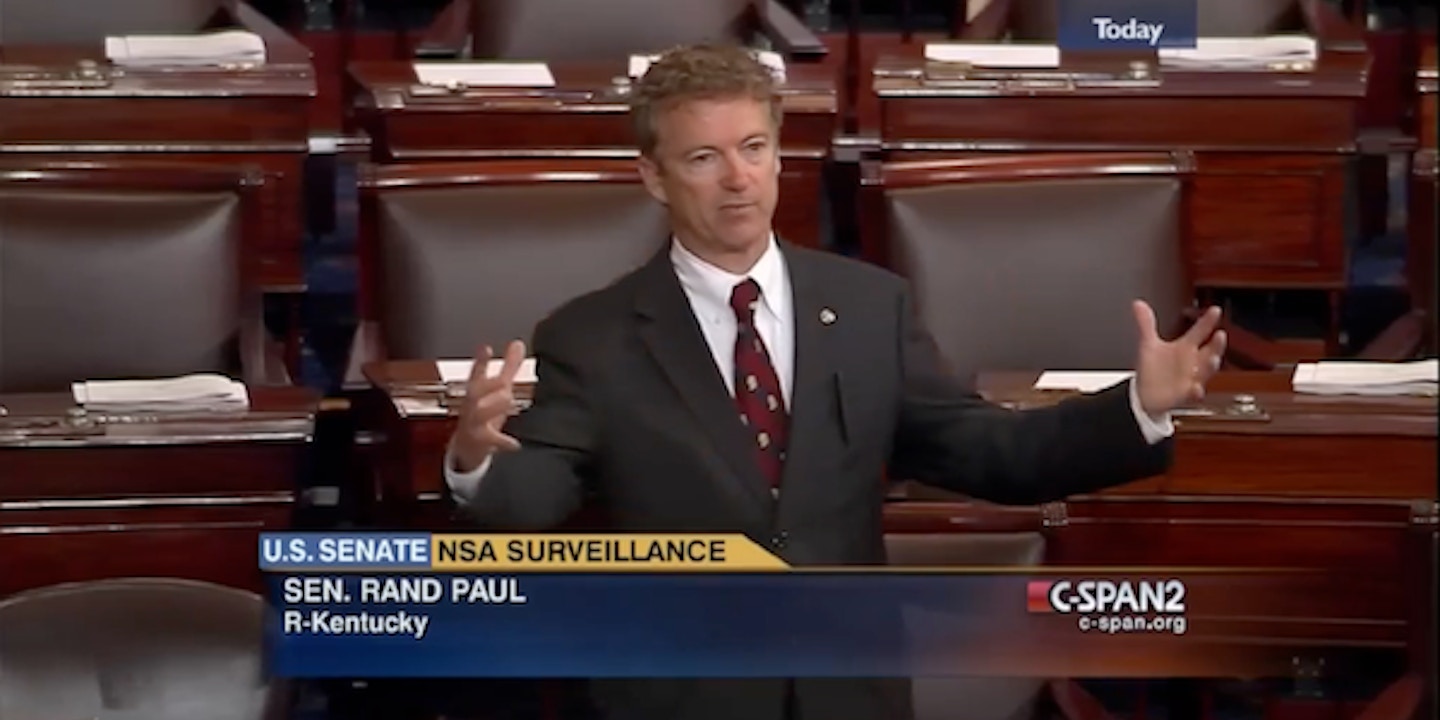 Is Dan Froomkin going to retract claims in this article now that Freedom Act and extension of 215 failed to act? Or does partisan nonsense trump accurate protrayal of thos issue?

Thank you coram noblis;
that was a very good article. good— but scary.

The spy people are doing all of that that we know of and even more! Why is anyone worried about TPP then, because our democratic republic is now owned by private contractors, who can look into anyone’s life or any company or any inventions, or discoveries and own all that work before the real creator does.

Or —–sell information to a small government and make yourself a king. wow——- is that how All Sisi got his win?

I am now wondering about all those political people who were caught sexting….who really outted them? ; ) O. K private cotractors-fess up.

Wow,a whole new industry has sprung up and so when the spies get tired of being in the NSA, hey can just grab onto someone’s bank account——and live like a king!

Imagine the wars they could start by inflitrating emails and tweaking just a few words. oh and the trials they could affect by tweaking words and evidence—-wow the outcomes——–so pretty much with all this power, we can’t even have honest elections, because who knows who messed with the end results. : )

I am soooo hoping for a major plasma attack from the sun—- that will really come up the works——–let freedom ring!

The USA Freedom To Spy On Americans Act moves the data store from NSA to Verizon but still allows unlimited spying on Americans. The spook gangs love it.

What we don’t need is several more years of blackmailed lawmakers, bedroom snooping, and insider trading.

What we do need is for the Patriot Act to expire completely. The Constitution provides for individualized search warrants. Bulk spying, whether by NSA or Verizon, is utterly evil.

FBI Cointelpro 2015
Anyone deemed Lone Wolf can be
targeted without a trial.
FBI Stingray spying.

All political theater full of sound and furry…who among us believes that a single bit or bite of data the NSA/GCHQ/BND intends to collect is not collected tomorrow and for the foreseeable future?

The Enlightenment is dead, our leaders are thugs.

Whenever I see the mention of the neocon’s name, James Comey, I can’t help but think of his background: formerly with Gibson, Dunn & Crutcher (Bush v. Gore, Citizens United v. FEC, etc.), HSBC Holdings (major drug cartel money launderer), chief counsel for Lockheed Martin, and the most damning of all, former director at the US Chamber of Commerce’s shyster arm, the National Chamber Litigation Center.

I suppose this neocon was appoint by Obama to head the FBI because he took the most dangerous criminal of all off the streets when he was at Justice (Martha Stewart)?

I went back and read the USA Freedom Act(don’t you just love those euphemistic names) for the second time(my head hurts for the second time) and I MUST reiterate what I stated in another comment section, that the vagaries built into this “kiss on a boo boo” piece of garbage are glaring. Our government has repeatedly shown a propensity for redefining words to such a degree as to make them meaningless. I don’t see this as a victory at all. As I’ve stated before, this is just a relief valve to calm the riled up peasants so they can say, “all better now, run along and play, and play nicely children”

From Betty Medsger’s The Burglary:

Hoover started the Security Index early in his career as director. Over the lifetime of the index, he changed its name twice. He succeeded in keeping its existence secret from the public from 1939 until the Media burglary. But that success was marked by tumultuous struggles from time to time. In the beginning, it was called the Custodial Detention Index. It became the Security Index in 1943 and then the Administrative Index, or AMDEX, in the fall of 1971. The name changes were related to increasing secrecy and had nothing to do with alterations in the nature of the program or in how it was conducted.

The “due attention to the core underlying issues” hyperlink is very worth a look-see: it summarizes Rand Paul’s five main points, succinctly. Point #5 in particular is key: the Patriot Act is only one facet of this surveillance state we’re saddled with.

Bulk collection was just ruled to be illegal – never authorized. And for some reason they need another bill to end this illegal practice? IT’S ALREADY ILLEGAL. What more do they need to stop it?

All of this rationale is wrong. It’s politicking at its worst.