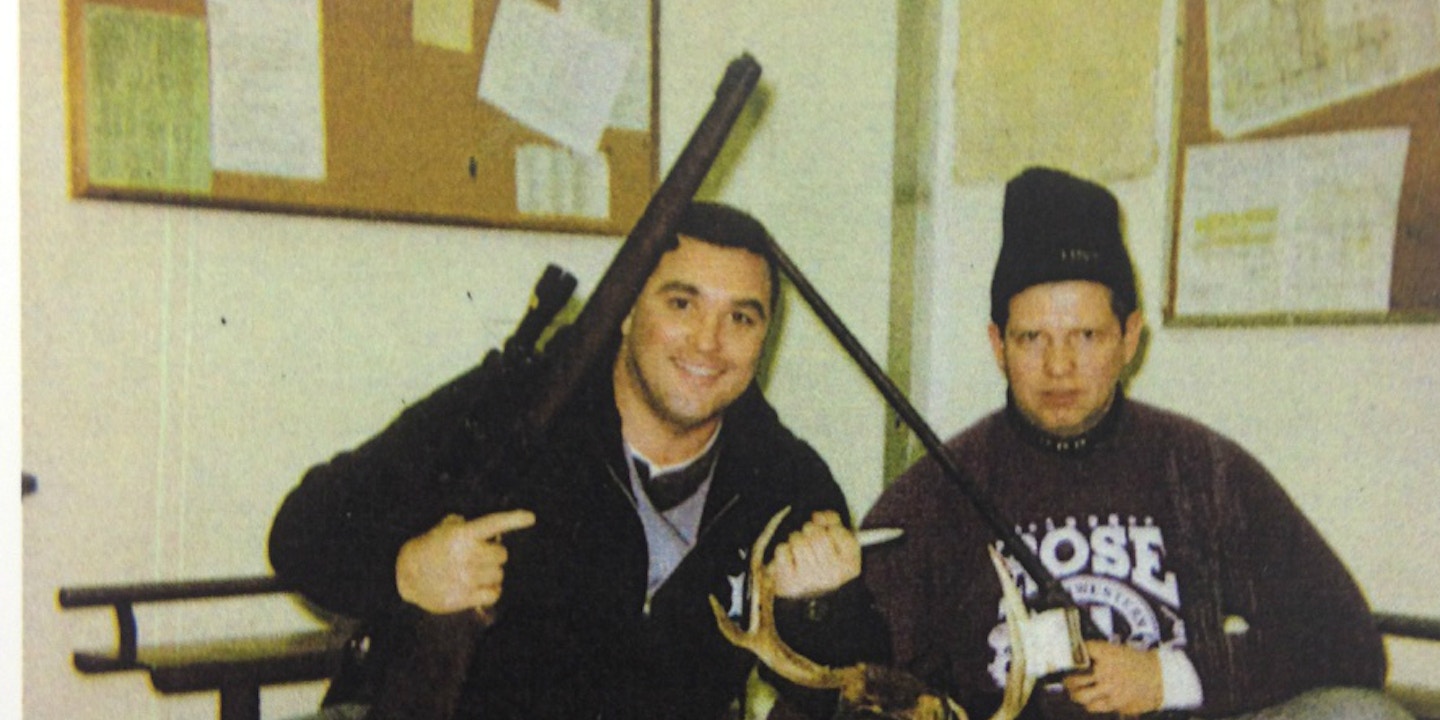 The photo shows two white Chicago Police officers posing with an unidentified black man. The officers — Timothy McDermott and Jerome Finnigan — are holding rifles as the black man lies on the floor with a dazed look on his face and with antlers on his head as if he were a prized, big buck finally hunted down.

Finnegan is smiling and grabbing the right antler, while McDermott is holding up the man’s head as if it were his trophy.

The photo was taken in a police station on the West Side of Chicago sometime between 1999 and 2003. The Chicago Police Department successfully kept it hidden from the public until a judge refused to keep it under seal and the Chicago Sun-Times pulled a copy from a court filing.

Finnigan is a notoriously dirty ex-cop who was a member of the police department’s elite Special Operations Section (SOS) until 2006, when he was charged with leading a gang of fellow officers who robbed suspects, illegally invaded homes and stole thousands of dollars in cash. He’s now serving 12 years in federal prison.

In a 2012 interview with Playboy, Finnigan admitted the SOS beat and tortured multiple suspects, and described shutting down an internal affairs investigation by appealing to one of his comrades in blue who worked in the Internal Affairs Division.

The Sun-Times reports that federal authorities gave the photo to Chicago Police in 2013, after Finnigan’s prosecution. As a result, a police board last year voted to fire McDermott — but only by a 5-4 margin.

After the Guardian disclosed this year how Chicago police kept their detention and torture at the Homan Square facility off the books, police told me no suspect is detained without proper paperwork. But it’s not at all surprising to find out that Finnigan and McDermott filed no arrest report the night the photograph was taken.

As for the man in the photo, he has no name. The police claimed he was dealing drugs, but there is no reason to believe them. Ultimately, whether the man was a drug dealer or not is irrelevant.

He was a human being, dehumanized by other men who swore to protect and serve the public good. And if the police, who have a monopoly on sanctioned violence, view a segment of the population as not quite human, then they will do anything to those people.

Against this backdrop, the deer photo — so reminiscent of the “trophy” pictures taken by the torturers at Abu Ghraib — has a direct relationship to the way police treat black communities.

The anti-black sickness that infects America’s police departments will not be solved by body cameras or any other ornament of reform. A more profound, national rejection is called for.