Corrected: St. Louis Grapples — and Fails to Grapple — With the Matter of Murdered Black Women

Blacks are more likely to be killed in Missouri than any other state, and five black women in St. Louis were recently killed in rapid succession. Do local police care? 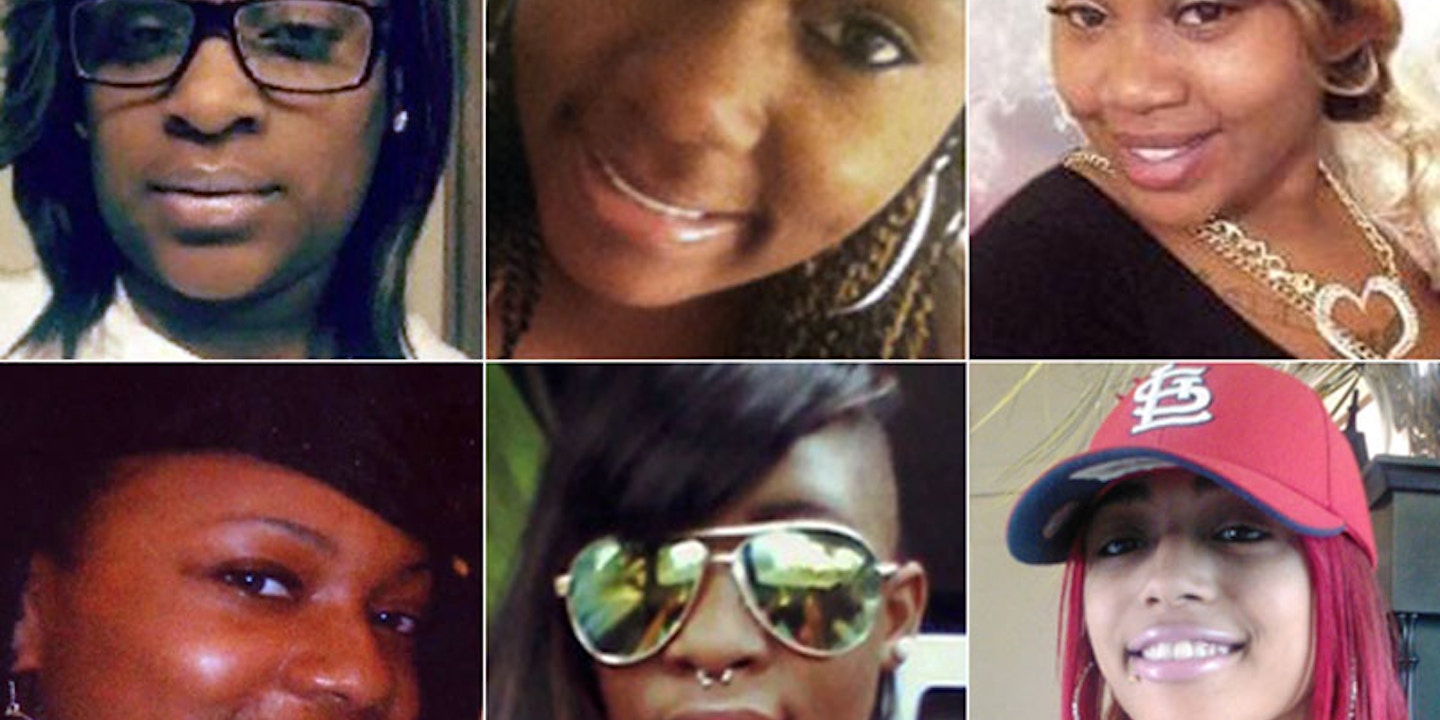 Editor’s Note: February 2, 2016
An earlier version of this story included a quote falsely attributed to an individual identified as a criminal justice professor. The subject told us that she had not spoken to our reporter, had never taught criminal justice, and had no expertise in the matters on which she was quoted. She requested that her name not be used.

The relevant section read: “‘There is a serious problem with black homicide in St. Louis, and when black people get a cold, black women get the flu.’ [She] echoed the Violence Policy Center Missouri, noting that most of the black women murdered in St. Louis are killed by male acquaintances. ‘Domestic abuse, sexual assault, gender-based violence is a huge problem here,’ she said, ‘and until we deal with that and get people the help and resources they need, black women will continue to be murdered at alarming rates.’ … ‘No matter what anyone does in life, her life doesn’t deserve to be ignored and forgotten,’ [she] said. ‘It’s a clear, sad truth that the lives of black women don’t matter.’”

The problems with this story reflect a pattern of misattributed quotes in stories written by Juan Thompson, a former staff reporter. This piece includes additional quotes that The Intercept could not verify, including one from an unnamed source and one from Angelia Mangum’s mother, who we were unable to reach. We apologize to our readers.

ON MARCH 30, with the sun about to set on Park Avenue in downtown St. Louis, Angelica Wysinger, 26, was sitting in a car with her romantic partner William Crume, 23. As the couple talked, Wysinger’s three children — ages nine, seven and two — sat in the back seat.

Suddenly, someone in a silver car pulled up alongside the family’s vehicle and unleashed a hail of gunfire.

Crume was pronounced dead at the scene, the nine-year-old survived a gunshot wound to the hand, and Wysinger, who won $55,558 in a state lotto two years ago, died at a local hospital.

A relative of the dead mother said the family is still grieving and that “we hope police find the people who did this. Right now we’re not being told anything by anybody.” Police refused to comment. The murders remain unsolved.

In the early morning, a month after the murders on Park Avenue, 25-year-old Korie Hodges’s father visited her apartment in North St. Louis to drop off a child for Hodges to babysit. As the father approached the front door, he found it ajar.

Upon entering the flat, he discovered Hodges and another woman named Keerica Bolden, 22, in a bedroom, dead of apparent gunshot wounds. In a nearby room, the grandfather found two young children unharmed. In an insulting twist, days after Hodges’s death, local media splashed her mug shot across St. Louis’s television screens as they reported she had been charged with looting during the Ferguson riots.

A mere three days after the murders of Hodges and Bolden, another pair of women were killed just blocks away. Sisters Antquonette Hale, 20, and Tahnaizja Smith, 15, were found dead of gunshot wounds in a trashed vacant lot surrounded by condemned buildings.

It was the second double homicide involving black women in the North Side St. Louis neighborhood of Greater Ville in five days.

One can’t help but think: If four white women had been murdered in a such way, in such a short period of time, in such a confined area, wouldn’t their deaths be front-page news across the country? Alas, the response has been muted.

Six months into 2015, St. Louis is grappling with an increased homicide rate. Through May, there have been 70 homicides in the city — which is roughly 18 more than at this point last year. Over 88 percent of the victims have been black, and women accounted for nearly a third of those killed. Almost all of the murdered were killed by firearms.

Missouri, according to a January report from the Violence Policy Center Missouri, was the country’s leader in black homicide victims in 2012. It is the fourth time in five years that the Show Me State has garnered the grim honor.

Black Missourians were murdered at a staggering rate of 34.98 per 100,000 — the highest of any state in the union and twice the national average, according to the report, which went on to highlight how bad things were for black women specifically:

While black females have the highest rate of death at the hands of male offenders — two and a half times higher than white females (2.59 per 100,000 versus 1.06 per 100,000) and two times higher than all women combined (2.59 per 100,000 versus 1.22 per 100,000) — the circumstances, relationships and weapons remain mind-numbingly constant for virtually all females of any race killed by males: someone they know, usually an intimate partner, during an argument or other non-felony event, and most commonly with a gun.

Despite the data, murdered black women receive, at best, hit-and-run coverage. Local news outlets will report such stories, but rarely is there follow-up; and, as many families will argue, the same is true with regard to law enforcement.

The unsolved murders of Florida teens Angelia Mangum and Tjhisha Ball — a pair of black women discovered nude, hands bound, dead in a pool of blood on the side of a highway last September — is emblematic of this pattern.

Mangum’s mother told me the police have refused to offer any details, and that she hasn’t spoken to them in months. A spokesperson from the Jacksonville Sheriff’s office declined comment. Meanwhile a quick Google search shows major media outlets haven’t covered the homicides since last October.

When the Florida homicides first came to light, lazy members of the media reported that both girls worked as sex workers. In reality, only Ball worked as a stripper, meaning — in explaining why the case has been largely ignored — she had multiple strikes against her: sex worker, poor, black and woman. Local news outlets elected to use their dispirited mugshots in news broadcasts.

For comparison, the 2014 murder of University of Virginia student Hannah Graham has received ample coverage — CNN, NBC, and the New York Post are among the outlets providing updates in the last month alone. This kind of discrepancy leaves observers to wonder when black women will receive the same sort of compassionate coverage from the news media and attention from the police.

“If they was two white girls from St. Johns — a wealthy, mostly white Jacksonville suburb,” Mangum’s mother told me, “this would be different.”

Back in Missouri, the St. Louis Metropolitan Police department is 63 percent white in a city where black residents constitute a plurality of 49 percent. The disparity has convinced some black St. Lousians that white cops don’t care about dead black homicide victims.

It should be noted that all of the St. Louis cases detailed above are open investigations, according to the police, and the perpetrators could still be brought to justice. But it’s hard to hold out much hope when two-thirds of St. Louis’s 2014 homicides — visited, again, on overwhelmingly black victims — remain unsolved.

It’s not clear that the families of black female homicide victims can even take some small comfort in protest movements. Even as demonstrators across the country confront a police state over its killings of unarmed black men, critics have charged the Black Lives Matter movement with excluding dead black women from the broader discourse around police brutality.

Indeed, black women and girls killed by the police, such as Rekia Boyd in Chicago, Aiyana Stanley-Jones in Detroit and Yvette Smith near Austin, Texas, did not receive the sort of media attention and protests that followed the killings of Michael Brown, Eric Garner and Freddie Gray.

In her book Ghettoside, Los Angeles Times crime reporter Jill Leovy reported that Los Angeles police officers regularly referred to a murder in one of the city’s black communities “as a nothing murder. ‘NHI — No Human Involved,’ the cops used to say.”

Does a similar sentiment exist among St. Louis police when it comes to murdered black women? In what researchers call a racial empathy gap, studies have purported to show that white Americans feel less empathy for their black counterparts.

Thus when black women — one of the most neglected, pilloried and marginalized groups in the country — are murdered, it makes sense that law enforcement and the news media, two institutions disproportionately stocked with white people, wouldn’t care much, if at all.