The Greatest Obstacle to Anti-Muslim Fearmongering and Bigotry: Reality

The think tank New America issued a report today documenting “the lethal terrorist incidents in the United States since 9/11.” It found that a total of 26 Americans have been killed by “deadly jihadist attacks” in the last 14 years, while almost double that number — 48 — have been killed by “deadly right wing attacks.” The significance of that finding was well-captured by the New York Times’s online home page caption today, promoting the paper’s article that included this quote from Terrorism Professor John Horgan: “There’s an acceptance now of the idea that the threat from jihadi terrorism in the United States has been overblown.” That the U.S. government, media and various anti-Muslim polemicists relentlessly, aggressively exaggerate “the terror threat” generally and the menace of Muslims specifically requires no studies to see. It’s confirmed by people’s everyday experiences. On the list of threats that Americans wake up and worry about every morning, is there anyone beyond hypnotic Sean Hannity viewers for whom “terrorism by radical Islam” is high on the list? 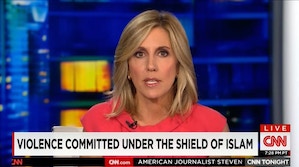 To believe the prevailing U.S. government/media narrative is to believe that radical Islam poses some sort of grave threat to the safety of American families. The fearmongering works not because it resonates in people’s daily experiences and observations: it plainly does not. It works because it’s grounded in tribalistic appeals (our tribe is better than that one over there) and the Otherizing of the marginalized (those people over there are not just different but inferior): historically very potent tactics of manipulation and propaganda. Add to that all the pragmatic benefits from maintaining this Scary Muslim mythology — the power, profit and policy advancement it enables for numerous factions — and it’s not hard to see why it’s been so easily sustained despite being so patently false.

It’s literally hard to overstate how trivial the risk of “radical Islam” is to the average American. So consider this: 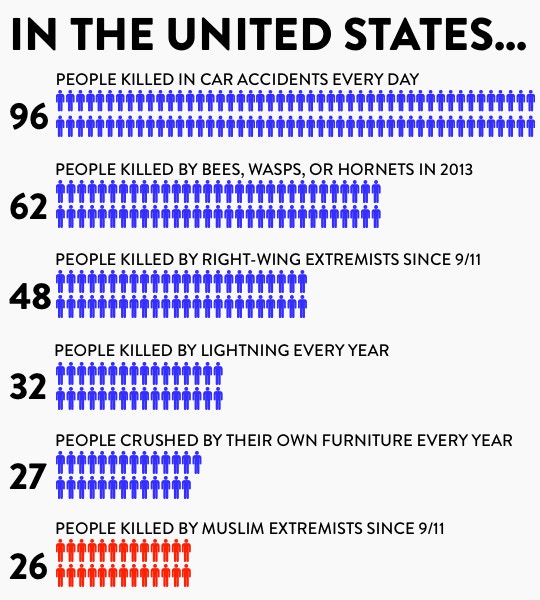 If anything, the chart severely understates how exaggerated the threat is, since it compares the total number of deaths caused by “Muslim extremists” over the past 14 years to the number of deaths caused daily or annually by threats widely regarded as insignificant. This is the “threat” in whose name the U.S. and its Western allies have radically reduced basic legal protections; created all sorts of dangerous precedents for invasions, detentions and targeted killings; and generally driven themselves to a state of collective hysteria and manipulation.