Today’s Civilian Victims in Yemen Will be Ignored Because U.S. and its Allies Are Responsible

Disappearing America’s victims is how the national self-perception as perpetual victim of terrorism, but never its perpetrator, is sustained.

In Fayoush, Yemen this morning, just outside of Aden, “a massive airstrike” hit a marketplace and killed at least 45 civilians, wounding another 50. Officials told the AP that “bodies were strewn about following the strike.” The bombing was carried out by what is typically referred to as a “Saudi-led coalition”; it is rarely mentioned in Western media reports that the U.S. is providing very substantial support to this “Saudi-led” war in Yemen, now in its fifth month, which has repeatedly, recklessly killed Yemeni civilians.

Because these deaths of innocents are at the hands of the U.S. government and its despotic allies, it is very predictable how they will be covered in the U.S. None of the victims will be profiled in American media; it’ll be very surprising if any of their names are even mentioned. No major American television outlet will interview their grieving families. Americans will never learn about their extinguished life aspirations, or the children turned into orphans, or the parents who will now bury their infants. There will be no #FayoushStrong Twitter hashtags trending in the U.S. It’ll be like it never happened: blissful ignorance.

This is the pattern that repeats itself over and over. Just see the stone-cold media silence when President Obama, weeks after winning the Nobel Peace Prize, ordered a cruise missile strike in Yemen, complete with cluster bombs, which ended the lives of 35 women and children, none of whose humanity was acknowledged in virtually any Western media reports. 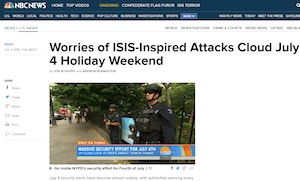 All of that stands in the starkest contrast to the intense victim focus whenever an American or Westerner is killed by an individual Muslim. Indeed, Americans just spent the last week inundated with melodramatic “warnings” from the U.S. government — mindlessly amplified as always by their media — that they faced serious terror on their most sacred day from ISIS monsters: a “threat” that, as usual, proved to be nonexistent.

This media imbalance is a vital propaganda tool. In U.S. media land, Americans are always the victims of violence and terrorism, always menaced and threatened by violent Muslim savages, always targeted for no reason whatsoever other than primitive Islamic barbarism. That mythology is sustained by literally disappearing America’s own victims, pretending they don’t exist, denying their importance through the casual invocation of clichés we’ve been trained to spout (collateral damage) and, most importantly of all, never humanizing them under any circumstances.

This is how the American self-perception as perpetual victim of terrorism, but never its perpetrator, is sustained. It’s also what fuels the belief that They are propagandized but We aren’t. While these deaths will be concealed from the American public, people in that part of the world will hear much about them: just as Americans heard almost nothing about the Al Jazeera journalist imprisoned for years in Guantanamo with no charges, Sami al-Hajj, while he was a cause celebre in the Muslim world, leading Americans to believe that only the Bad Countries, but never Us, imprison journalists. From this latest Yemen bombing and so many like it, the resulting differences in worldviews and perspectives isn’t be because “they” are propagandized, but because “we” are.