For regular people, terrorism and wars are tragedies. For our leaders — in every country — they’re something very different. The correct answer, obviously, is D.

“If the collapse of the Soviet Union and 9/11 bookend a major shift in international politics, then this is a period not just of grave danger, but of enormous opportunity. Before the clay is dry again, America and our friends and our allies must move decisively to take advantage of these new opportunities.”
— Condoleezza Rice, April 29, 2002 A. The al Qaeda bombing of a hotel in Mombasa, Kenya, on November 28, 2002.
B. The place where terrorists murdered 13 people, including Israeli brothers Noy and Dvir Anter, ages 12 and 13.
C. The location where, CNN reported, “screaming children covered in blood searched desperately for their parents amid the wreckage.”
D. A GOLDEN OPPORTUNITY!

Again, of course, the answer is D.

“Israeli officials view last week’s terrorist attacks … as reinforcing their argument that Israel and the West are battling a single enemy. Foreign Minister Benjamin Netanyahu, meeting with ministry staff in the aftermath of the Kenya attacks, said that the incidents had presented Israel with a ‘golden opportunity’ to strengthen its strategic ties with the United States and other Western countries.”
— The Forward, December 6, 2002 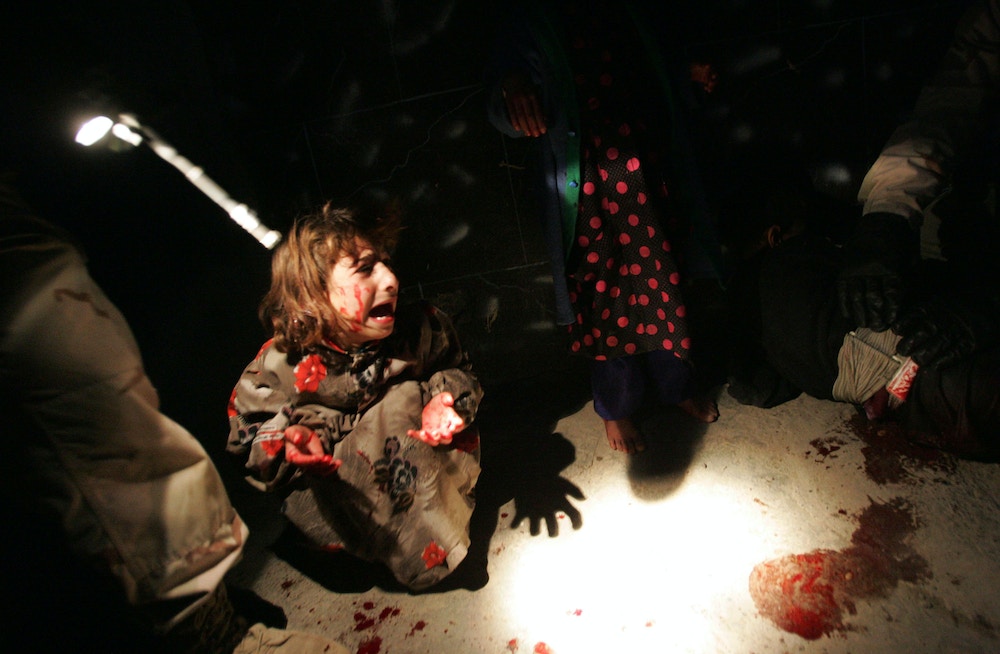 A. Five-year-old Iraqi Samar Hassan, covered in her parents’ blood shortly after they were killed by U.S. soldiers at a checkpoint in 2005.
B. The reason why Hassan now says: “I always dream about my father and mother.”
C. Something every American should be atoning for until the day we die.
D. A GOLDEN AND UNIQUE OPPORTUNITY!

The correct answer is D. Duh.

“Targeting America in Iraq in terms of economy and losses in life is a golden and unique opportunity. Do not waste it only to regret it later.”
— Osama bin Laden, December, 2004

Probably my point here is clear. But I will go ahead and spell it out.

For normal people, terrorism and wars are purely and only tragedies.

For our would-be “leaders,” however — in every country — the situation is different. Of course, they pretend to feel the same as normal people. They give teary-eyed speeches about sorrow and suffering.

And yet, behind their tears, there seems to be something else. When they think no one is looking, you glimpse another expression flitting across their face. You think it couldn’t be. But — yes, incredibly enough, they’re smiling. Because before the bodies are cold, before the mothers and fathers have stopped shrieking, our leaders are thinking:

This is really a fantastic opportunity.

It’s understandably hard for most people to come to terms with this. It’s terrifying to believe your leaders may secretly be, uh, not so sad if you die. But all you have to do is listen to them, and they’ll tell you.

Can we change this? Maybe. But the first step in changing reality is facing it, no matter how ugly and frightening it is.