An Oklahoma appeals court issued a last-minute stay of execution for Richard Glossip in order to consider new evidence that could prove his innocence. 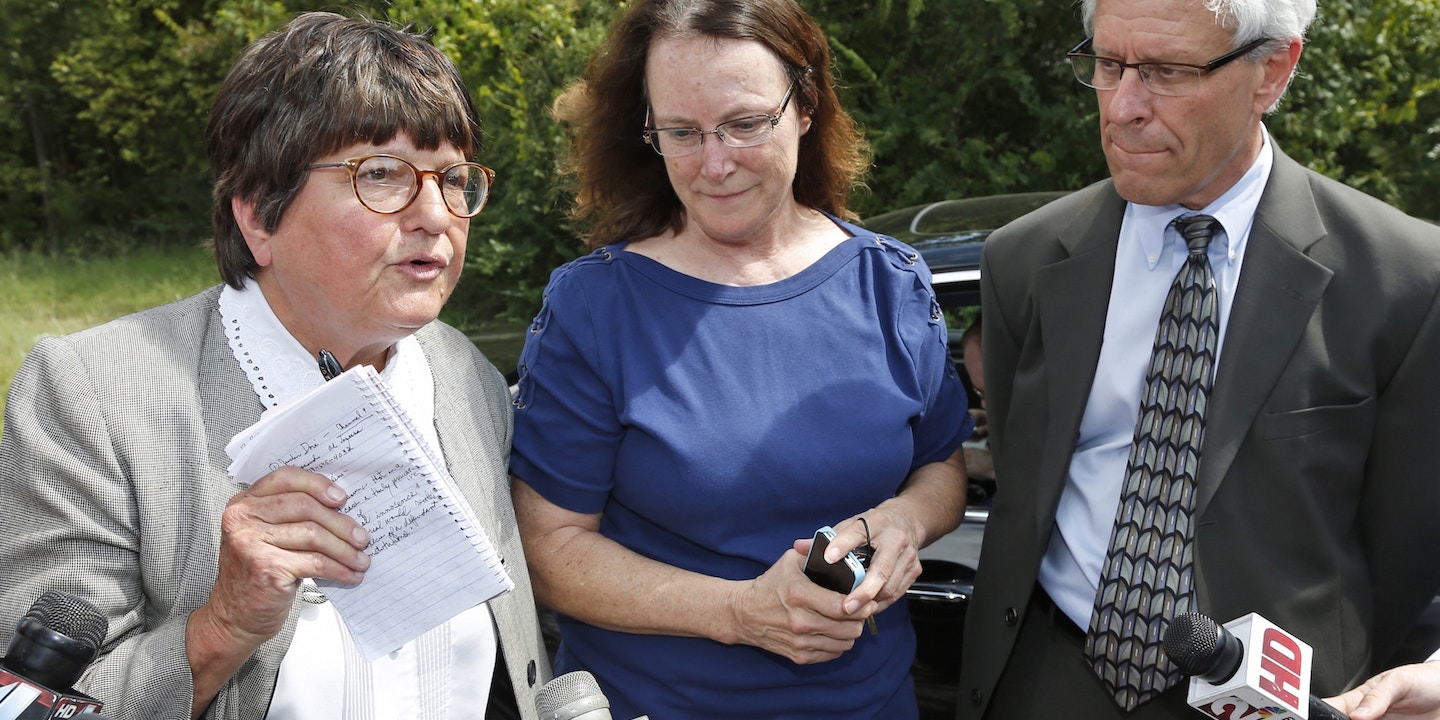 Roughly three hours before he was to be strapped to the gurney inside Oklahoma’s execution chamber, Richard Glossip received word that the state would not be killing him today after all.

“Yes!” Glossip said, pounding on the glass in front of him, according to his lawyers (pictured at right above, with activist Sister Helen Prejean), upon learning that the Oklahoma Court of Criminal Appeals had issued a temporary stay of execution. In a two-page order, the court said it wished to “give fair consideration” to new evidence raised in Glossip’s final appeal, which was filed by his legal team yesterday. The court has given itself two weeks to do so, resetting the execution for September 30.

The relief among Glossip’s attorneys was palpable in images posted to social media by reporters outside the prison in McAlester, Oklahoma, where many had gathered to protest the execution of a man they firmly believe to be innocent. (Lead attorney Don Knight told Oklahoma City FOX investigative reporter Phil Cross he was “really fucking happy.”) Glossip’s legal team has spent the past few months in a race against time, chasing down evidence to support what Glossip has said for 18 years: that the key witness responsible for sending him to death row, his former coworker Justin Sneed, lied when he claimed that Glossip was the mastermind behind the 1997 murder of their boss, Barry Van Treese. Sneed, who admitted he beat Van Treese to death with a baseball bat at the Best Budget Inn in Oklahoma City, blamed his crime on Glossip, his then-supervisor, saying Glossip had offered him thousands of dollars to carry out the murder.

On Monday, Glossip’s legal team released dozens of pages in affidavits and other documents casting new doubt on Sneed’s version of events — new evidence that is also detailed in the filing pending before the appeals court. As The Intercept reported, the affidavits include claims by a man who was incarcerated with Sneed in 2006, who described how Sneed boasted in prison that he set up Glossip for the murder, saving himself from the death penalty in the process. The materials also included an affidavit by a lawyer doing post-conviction work on a different Oklahoma City murder case, which describes how the same police detectives who secured Sneed’s statements implicating Glossip reportedly used abusive and coercive interrogation techniques, liable to result in false statements.

These same documents, and many more, were provided on Monday to Oklahoma Gov. Mary Fallin, who had the power to impose a 60-day stay of execution in light of the new evidence. But Fallin declined the request, denying there was anything “new” at all, and calling Glossip’s last-minute efforts to prove his innocence part of a “larger publicity campaign opposing the death penalty.” Fallin further said she saw “no reason to cast doubt” on Glossip’s conviction — though she urged Glossip’s lawyers to take the information to the Oklahoma Court of Criminal Appeals, which she said was the appropriate venue.

Today, Fallin released a second, terse statement in response to the Court’s stay of execution, vowing to “respect” whatever decision the court makes regarding Glossip’s case, and extending her “thoughts and prayers” to the Van Treese family “who has suffered greatly during this long ordeal.”

Glossip has come close to being executed before. In January, he came within a day of the death chamber before being granted a reprieve by the U.S. Supreme Court, in order to consider his challenge to Oklahoma’s lethal injection protocol. That challenge ultimately failed, when the Court upheld the state’s use of the contested drug, midozalam, on June 30. Oklahoma requested a new execution warrant the very same day.

Glossip had already been served his last meal — fast food from Wendy’s, Long John Silver’s, and Chili’s, according to the Department of Corrections, which provided the meal on Tuesday — when he learned he would live at least another two weeks. His family had traveled from across the country to say their goodbyes. Now, along with activists and Glossip’s attorneys, they face a new race against the clock.