Abu Zubaydah’s lawyers followed the new declassification rules, but the U.S. still won’t let them publish his descriptions of the torture he experienced. Despite promises to allow Guantánamo prisoners to speak more freely about their experiences there, the U.S. government is still blocking the release of over 100 pages of notes and diaries from torture victim Abu Zubaydah.

The U.S. had for many years taken the position that the prisoners could not describe their own experiences of torture and confinement because those activities were classified.

But in January, after the release of the Senate Intelligence Committee’s torture report, the government changed its classification rules. In a brief filed in a military commission case, the government wrote that “general allegations of torture” minus specific details about the CIA agents involved or the location, were now unclassified.

The brief specifically lists 119 names of prisoners who could now discuss details about their treatment — and, according to Joe Margulies, a law professor at Cornell and lead defense attorney for Zubaydah, his client’s name is the first one on the list. 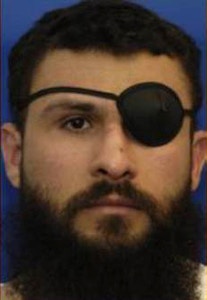 Zubaydah, who the Bush administration incorrectly alleged was a key al Qaeda operative and who has never been charged with a crime, has sent his lawyers hand-written letters, declarations, and other materials describing his torture and confinement in CIA black sites and Guantánamo Bay.

Amy Jacobsen, Margulies’ co-counsel, laid out the specific steps the team took in submitting the Zubaydah material for review by the government’s Privilege Review Team in an email to The Intercept. “The bulk of the material I submitted was taken from letters that [our client] had written to us, in which he described his torture, but there were also some notes from meetings with him, and some written declarations that he had made to us,” she wrote. “Sometimes these included physical descriptions of his torturers and indications of where in the world he was imprisoned, but I removed any such identifying information, leaving ellipses, such as this [ . . .] in their place,” she explained. “If he said what they were asking him about in the interrogation, I also removed that. The only information that I submitted for review was information regarding his torture, treatment, and conditions of confinement and transfer.”

“We followed the new guidelines to the letter,” Margulies told The Intercept.

Jacobsen said she also neatly organized the pages with paragraph and page breaks, so that any offending page could be singled out and addressed.

However, as Margulies first told Reuters, the government has responded with an almost blanket refusal: “We submitted 116 pages in 10 separate submissions. The government declared all of it classified.”

Zubaydah is a prolific and detailed writer, as can be seen in the pre-detention personal diaries that were leaked to reporters almost two years ago.

He was a guinea pig for the CIA’s brutal post-9/11 interrogation program, as its first subject, starting after his capture in 2002. His left eye deteriorated while in custody to the point that he ultimately lost it, though the circumstances of the deterioration and how the torture might have exacerbated it are unknown.

In 2006, Ron Suskind reported in his book The One Percent Doctrine that Zubaydah was a mentally ill minor functionary who made up fake plots to please his torturers. In 2009, the Justice Department backed away from the Bush-era assertions that Zubaydah had been a top al Qaeda member involved in the 9/11 plot.

A group of nine different human rights organizations sent a letter to Secretary of Defense Ashton Carter and Attorney General Loretta Lynch last week demanding the release of Zubaydah’s reminiscences. “Earlier this year … the government made clear in certain military commission cases and in its own classification guidance pertaining to the RDI program, that the ‘conditions of confinement’ and the ‘treatment’ of detainees while in CIA custody, among other things, were no longer classified,” the letter states. “That the administration is now refusing to permit the release of Abu Zubaydah’s account of his treatment is a setback for a trend towards greater openness.”

Several months after the release of the Senate torture report, the administration declassified lawyers’ notes about the prisoner Majid Khan. Khan, a former resident of Baltimore, Maryland, is the only legal resident of the U.S. to be held at Guantánamo. According to the declassified notes, Khan was beaten, left in total darkness, repeatedly waterboarded and raped through the use of what the CIA called “rectal feedings.”

“A prisoner’s memories of the details of his disappearance and torture … is not information owned by the U.S. government, and cannot be properly classified,” wrote Katherine Hawkins, a national security fellow for OpenTheGovernment.org, in a letter last week to John Fitzpatrick, the director of the government’s information security oversight office.

Caption: A detainee stands at a fence holding Islamic prayer beads in the Camp Delta detention facility at the Guantánamo Bay U.S. Naval Base in Cuba, Sept. 19, 2006. The photo was reviewed by a U.S. Department of Defense official.