From the start, not even the U.S. military had the audacity to try to obscure that they did this. They left that dirty work to their leading media outlets, which, as usual, are more than eager and happy to comply.

Much of the world spent the last 48 hours expressing revulsion at the U.S. airstrike on a hospital in Kunduz, Afghanistan. It was quite clear early on that the perpetrator of the attack was the U.S., and many media outlets and other organizations around the world have been stating this without any difficulties.

“U.S. Airstrike Kills 19 at Doctors Without Borders Hospital in Afghanistan,” states the straightforward Wall Street Journal headline, under which appears this equally clear lede: “A U.S. airstrike in the Afghan city of Kunduz killed at least 19 people at a hospital run by international medical-aid organization Doctors Without Borders early Saturday, prompting condemnation from humanitarian groups and the United Nations.”

Human Rights Watch chose this as its headline: “US Airstrike Hits Kunduz Hospital.” And so on. Even the media outlets that early on took a more cautious approach nonetheless prominently identified right from the start — in their headline and/or lede — the key fact: namely, who was the likely perpetrator. This Vice headline states: “19 Dead After Apparent US Airstrike Hits MSF Hospital in Afghanistan”; USA Today’s headline read: “19 killed after Afghan hospital hit in suspected U.S. airstrike”; while NPR in its first sentence definitively stated that the hospital was hit by “an aerial attack carried out by U.S. forces.”

But not CNN and the New York Times. For the last 36 hours, and up through this moment, this is the extraordinary opening paragraph in the featured article on the attack from the cable news network:

We’re bravely here to report that these two incidents perhaps coincidentally occurred at “about” the same time: There was a hospital that blew up, and then there was this other event where the U.S. carried out an airstrike. As the blogger Billmon wrote: “London 1940: Civilians throughout the city were killed at about the same time as a German air strike, CNN reports.”

The entire article is designed to obfuscate who carried out this atrocity. The headline states: “Air attacks kill at least 19 at Afghanistan hospital; U.S. investigating.” What’s the U.S. role in this incident? They’re the investigators: like Sherlock Holmes after an unsolved crime. 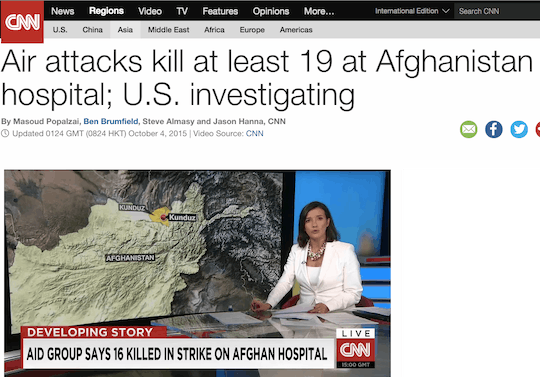 The article itself repeatedly suggests the same: “The United States said it was investigating what struck the hospital during the night.” It’s a fascinating whodunit and the U.S. is determined to get to the bottom of it. Offering a tantalizing clue, CNN notes that “the circumstances weren’t immediately clear, but the U.S. military was conducting an airstrike in Kunduz at the time the hospital was hit, U.S. Army Col. Brian Tibus said.” So the U.S. commits a repugnant atrocity that, at the very best, was reckless, and CNN can’t bring itself to state clearly who did it.

In its own special way, the New York Times has been even more craven. Its original article on the attack opted for this bizarrely agent-less formulation: Some airstrike, traveling around on its own like a lost tourist, ran into a hospital in Afghanistan (admittedly, for sheer propagandistic obfuscation, nothing will ever top the repellent missile-tourism headline chosen by the NYT when Israel bombed a Gaza cafe in 2014 and killed 8 people: “Missile at Beachside Gaza Cafe Finds Patrons Poised for World Cup”).

The article in the NYT’s Sunday print edition illustrated the pains the paper was suffering to avoid framing the story as what it was: a U.S. airstrike on a hospital. This is what readers of that paper saw on Sunday morning: 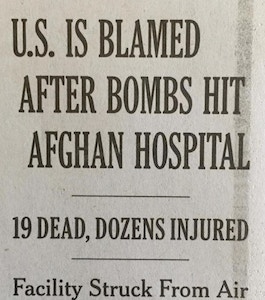 In fairness, this is a modest improvement from the day before, as it at least constitutes an acknowledgment that there are some people in the world who are blaming the U.S. for what happened — but none who are at the New York Times of course! That led Kade Crockford, in exasperation, to offer this obvious editorial suggestion: Even as of this morning, more than 48 hours later, the NYT continues to obscure who perpetrated this attack. In a long article about the effects on the region’s residents from the destruction of their only hospital capable of advanced care, one reads and reads some more without any mention of who actually did this: Note the lovely claim in the first paragraph that things have become so very “precarious for residents caught between government troops and Taliban militants after the withdrawal Sunday of an aid group that was one of the last providers of medical services there.” In addition to “government troops and Taliban militants,” they’ve also sort of been “caught between” massive American firepower that destroyed the hospital in question, though this unpleasant fact has been vanished from the NYT’s narrative of this event.

It’s not as though these media outlets have any doubt about who did this. Both the NYT and CNN eventually get around to acknowledging that it was the U.S. who did it. In today’s NYT article, for instance, the paper generously acknowledges in the third paragraph that “the Pentagon … has said it may have inadvertently struck the hospital during a military operation”; grants anonymity to a “senior U.S. military official” in the fourth paragraph to justify why “American forces on the ground then called for air support”; and then, all the way down in the 10th paragraph, finally gets around to acknowledging that “the attack … appeared to have been carried out by American aircraft.”

The U.S. and its allies — in both the Afghan government and its own media — have now switched course from the “it was a collateral damage mistake” cliché to the proud “yes we did it and it was justified” boast (indeed, a large bulk of today’s NYT article, ostensibly about the effects of the hospital’s destruction, is actually devoted to giving voice to those who are justifying why the hospital was attacked, even as the framing of the article is designed to suppress the identity of the perpetrator). But from the start, not even the U.S. military had the audacity to try to obscure that they did this. They left that dirty work to their leading media outlets, which, as usual, are more than eager and happy to comply.

See also from today:  The Radically Changing Story of the U.S. Airstrike on Afghan Hospital: From Mistake to Justification