Dissent on Israel Not Permitted at Bernie Sanders Event

A sign with a question about Palestine got students ejected from a Sanders campaign rally. 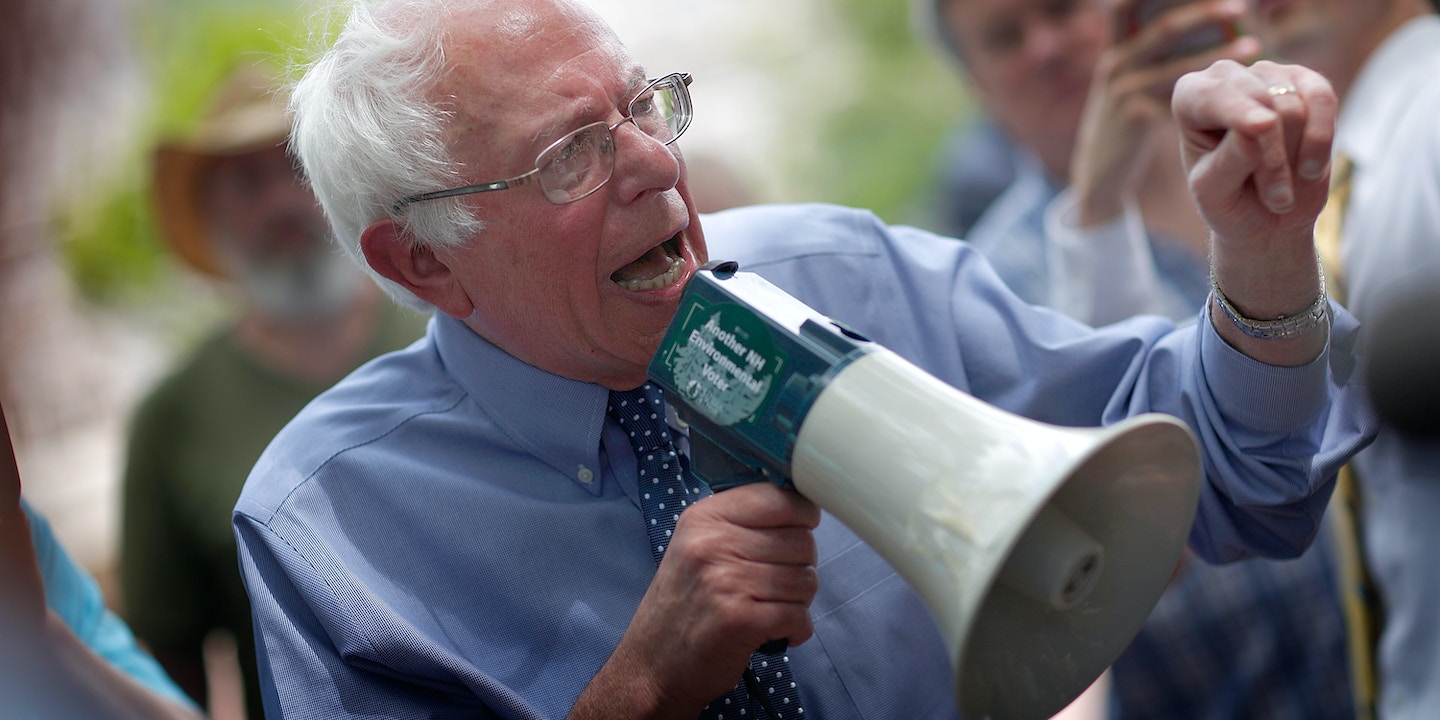 In 2004, while President George W. Bush was running for re-election, he developed a sinister reputation for aggressively banishing political dissent from his events. Bush “rewrote the playbook for organizing campaign rallies,” USA Today declared, ejecting from them people who scrawled anti-war messages on signs and shirts. The ACLU sued and successfully settled with the federal government over one couple’s thwarted attempts to wear anti-Bush t-shirts to a 2004 rally. One political science professor even compared Bush to Richard Nixon over the suppressive behavior at these events.

Fast forward to 2015, this past Saturday, when Bernie Sanders, an increasingly viable contender for the Democratic presidential nomination, held one of his biggest campaign rallies to date, drawing more than 20,000 people to an event at the Boston convention center. Among those visitors were a number of young activists from Boston Students for Justice in Palestine, who were curious about Sanders’ position on the occupied territories. They had a sign with them; in a playful nod to one of Sanders’ campaign slogans, it simply asked, “Will Ya Feel The Bern For Palestine?” The activists say they were well-received by other Sanders supporters in the crowd.

But staffers working for a candidate widely viewed as one of the most progressive members of the Senate were apparently not happy. Security was made aware of a threat: Some students who support Sanders were holding a sign with a question on it. A tactic right out of the Bush campaign “playbook” went into action.

“They told us to either put the sign away or leave,” said Sana Hashmani, one of the student activists. “We asked why, and they said that Bernie’s campaign staff had said the sign had to go.”

There had been no signs of trouble previously. The pro-Palestine group was doing nothing unusual — except, perhaps, for daring to question Sanders about territories occupied by Israel, of which Sanders has been a not-entirely-progressive supporter. “When we got there and entered the overflow space with our sign, people were supporting us and taking pictures, and other people had signs talking about various social issues as well,” Hashmani said.

In a brief cell phone video of the incident, security staff can be seen threatening to arrest the students if they didn’t leave the premises.

Two days after the students were ejected, a day after the group posted about the encounter on Facebook, a Sanders 2016  spokesperson acknowledged a campaign staffer was behind the ejection and that an error had been made. “What happened was a poor decision by a low-level staffer and doesn’t reflect campaign policy,” the spokesperson said.

To a certain extent, the episode reflects an underlying tension between Sanders’ base of young progressives and his comparatively friendly posture toward Israel. A 2014 Pew Research Center poll found minority and millennial Democrats markedly more critical of Israeli military actions. At a town hall event last August, Sanders lost his temper with supporters who had interrupted him to question him about U.S. support for Israel, telling them to “shut up,” and attempting to change the subject to ISIS.  During Israel’s 2014 military campaign against the Gaza Strip a plurality of Democrats described the action as “unjustified,” while Sanders was part of the unanimous Senate consent supporting Israel’s actions. He has continued to defend the “Protective Edge” operation as a legitimate act of self-defense, albeit one in which Israel “overreacted.”

But the ejection of pro-Palestine students from the Sanders rally surfaced a bigger question with a potentially more disturbing answer: Can this candidate, beloved by the left wing, learn to cope more tolerantly with protest and dissent?

Already, Sanders has been criticized for his handling of Black Lives Matter protesters at his events. Boston Students for Justice in Palestine are also worried about a tendency to marginalize, rather than engage, critics.

“What concerns us most,” read a post about the incident on the group’s Facebook page, “about being unwelcome in this political space on the basis of a sign is not what is says about Bernie’s stance on Palestine, but rather, his team’s refusal to entertain diverse viewpoints. Is this how Bernie is going to answer those, supporters and non-supporters alike, who ask challenging questions about his views? Just silencing them?”

In recent months, Sanders has been transformed from an obscure candidate into a potent challenger to Hillary Clinton. This effort has come in large part due to a committed progressive base, who contribute not just by attending Sanders rallies but financially, with small individual donations that have become a tidal wave, helping the candidate stay competitive. For this young base, the suggestion that his campaign is unreceptive to their views, perhaps even willing to silence them, is particularly dispiriting.

“The way they reacted to us trying to bring up this issue was very aggressive,” said Jose Godoy, one of the students ejected from the event. “They singled us out, and didn’t seem to want this issue to be brought up at all.”

That view was echoed by Ibrahim Sumaira, who said, “We look up to Bernie Sanders on a lot of issues, but we don’t want the same thing to happen where we believed that Barack Obama would meaningfully change foreign policy and nothing of that sort ended up occurring.”

Update: Added comment from the Sanders campaign, responding to a prior request from The Intercept. Oct 5 11:50 pm.

Correction: A previous version of the story identified the “shut up” incident as taking place in August 2015, whereas it should have indicated August 2014.

Update: Sanders campaign manager Jeff Weaver has indicated the staffer responsible for the ejections has been removed from their position, and reiterated the decision to remove the students does not reflect campaign policy.