Western nations, primarily the U.S., Great Britain, Germany, and Russia, have helped increase corruption among Middle Eastern and North African states by selling them vast quantities of weapons with little oversight, according to a new report by Transparency International. 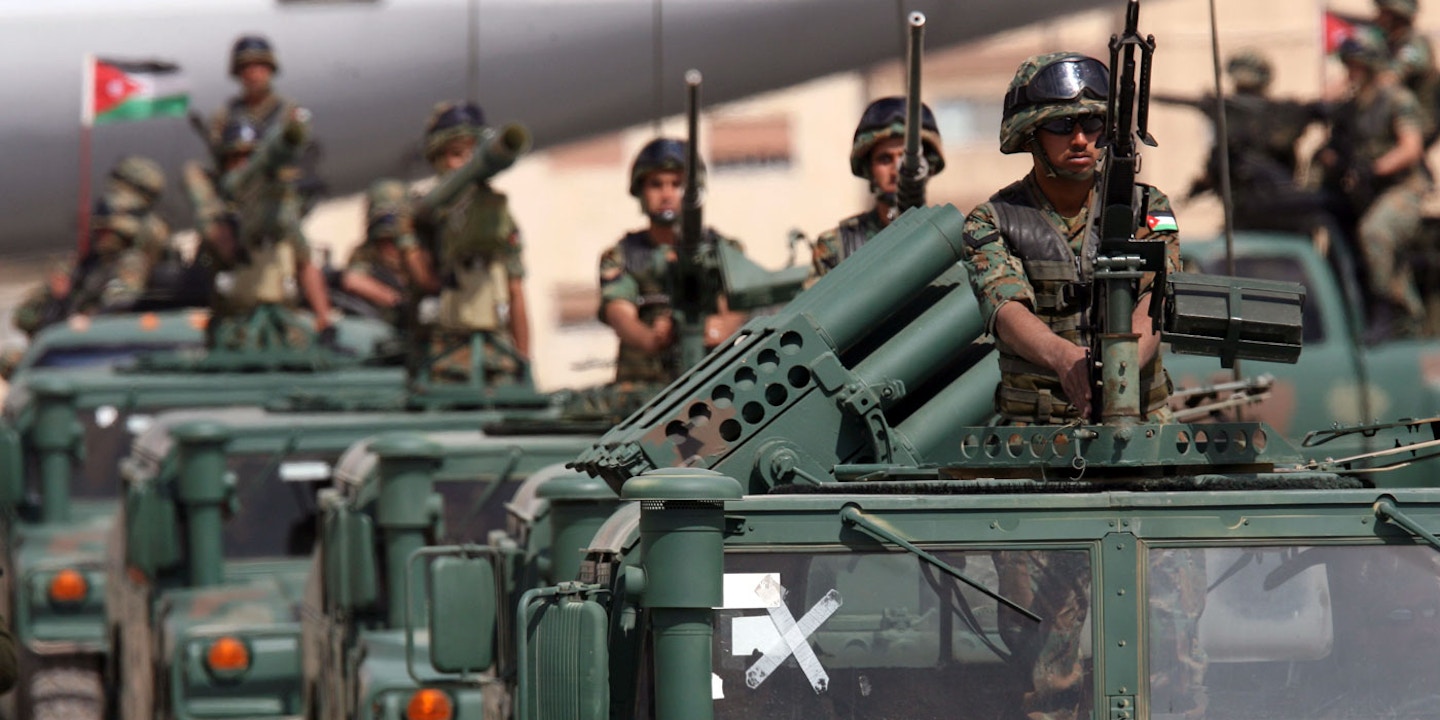 WESTERN NATIONS, primarily the U.S., Great Britain, Germany, and Russia, have helped increase corruption among Middle Eastern and North African states by selling them vast quantities of weapons with little oversight, according to a new report by Transparency International. The resultant corruption, the report says, has worsened the region’s many conflicts, weakened military coherency, boosted extremism, and “formed a narrative for violent extremist groups.”

Many of the 17 countries listed in the report are already notoriously corrupt, and increasing military spending without adequate oversight, the report states, means defense budgets are not being spent to meet countries’ strategic needs, weapons are increasingly trafficked over porous borders and the governments’ domestic legitimacy — already battered by 2011’s revolts — are further undermined.

Furthermore, if the countries selling advanced weapons fail to take greater responsibility for where their products end up, said Katherine Dixon, head of Transparency International’s Defense and Security Program, they could exacerbate the risk of future conflicts.

“This is one of the most unstable and conflict riven regions in the world,” Dixon said in a summary of the report, which draws on two years of research. “Over a quarter of the world’s most secretive defense spending is in the Middle East. Corruption puts international security at risk, as money and weapons can be diverted to fuel conflict.” The 17 countries: countries collectively spent more than $135 billion in 2014 alone. That’s 7.6 percent of global military spending, but about one-quarter of the world’s “opaque defense spending,” which the report defines as “defense spending that is either not revealed or revealed in only highly aggregated form to a legislative committee.” And it’s a growing market. The Gulf Cooperation Council countries — Bahrain, Kuwait, Oman, Qatar, Saudi Arabia, and the United Arab Emirates — have increased arms spending by 71 percent in the last decade. Saudi Arabia is the world’s top growth market for military spending, with a 17 percent increase from 2010 to 2015, the report states.

“Secrecy across security and defense establishments remains the norm,” the report states.

Only Jordan and Tunisia publish defense budgets, and only the latter has parliamentary defense committees authorized to question and scrutinize defense spending. This lack of public oversight helps perpetuate a system where arms deals primarily benefit the countries selling the weapons.

According to data from the Stockholm International Peace Research Initiative, which maintains a database of arms transfers around the globe, the three biggest arms dealers from 2004-14 were the United States ($86.4 billion), Russia ($70.9 billion) and Germany ($21.5 billion). The United States and Russia are by far the biggest arms suppliers to the Middle East and North Africa, with Moscow the main supplier for Iran, Syria, Algeria and Yemen. Germany was the top supplier to Tunisia, France armed Morocco and Canada was the top shop for Libya. Washington was the main supplier for all other countries in the study.

Some of the countries’ purchasing decisions are “seemingly bizarre,” the report states. The tiny peninsular state of Qatar bought more than 100 tanks, suggesting political concerns outweighed strategic concerns in its military purchases. Saudi Arabia, where defense and national security spending accounts already for a massive 30 percent of total government expenditures, has also used defense purchases to “solidify alliances,” and thus has bought several duplicative weapons systems, such as the British Typhoon and American F-15 fighter jets. The country is on course to become the world’s fifth largest military customer by 2020. And just last month, Saudi Arabia received an official invitation from the British government to attend the London Arms Fair, one of the largest gatherings of arms dealers in the world. Next door, Kuwait has over-purchased Patriot missile batteries and struggles to train the personnel required to operate them. A ranked list of countries and their risks of defense corruption, from “high” to “critical.”

Iraq’s Air Force can’t get its Russian radar systems and American fighter jets to operate together, resulting in significant battlefield losses against the Islamic State because of the lack of air support, despite more than $24 billion spent by the United States for training, equipment, and other services since 2003, according to the U.S. Government Accountability Office. This has further led to low morale, desertions by the tens of thousands, and the “ghost soldier” phenomenon, where commanders falsify the number of soldiers.

Rampant corruption, the report argues, has helped fuel popular support for non-state militia groups, with Yemen as a prime example.

That country has received more than $500 million in military aid from the U.S. since 2007, not including classified programs, Dixon said in a separate email. Many of those programs, however, emphasized counterterrorism and put weapons into the hands of security agencies that were divided by political factions. This created a “perverse incentive,” Dixon said, to maintain a level of conflict that kept the money flowing into the pockets of corrupt officials. Aviation Week reported that ousted President Ali Abdullah Salah’s half-brother, for one, had free reign over the air force, leaving it in a state of chaos, until the men under his command revolted in anger in 2012.

“There’s examples of planes and ships going missing that have been provided by the U.S.,” Dixon told The Intercept. “It feels pretty difficult to lose a ship and a plane.”

With its military a hollow shell, the government in Sanaa was unable to quell a Houthi rebellion that further plunged the country into civil war.

“Arms don’t disappear when militaries collapse,” Dixon said. “When the Houthi rebellion arrived in the capital, Sanaa, the armed forces were unable to respond effectively. Some of the weaponry currently in the hands of the Houthis was acquired straight from those elements of the Yemeni army which had received security equipment.”

In March, Yemen’s much wealthier GCC neighbors put their recently acquired British and U.S. arms to use by opening a bombing campaign against the rebels, who now control the capital. More than 5,000 people have been killed since March and tens of thousands displaced. Centuries-old historic buildings in Sanaa have been destroyed. A Médecins Sans Frontières hospital in the north of the country was just the latest building to be struck by Saudi bombs.

In Egypt, where the military has long controlled much of the national economy, the defense budget is officially a state secret. The situation has worsened since former Gen. Abdel Fattah Sisi took power in a coup, with his government quashing attempts to investigate a major corruption scandal. An investigation by Africa Confidential revealed generals had stashed away an estimated $9.4 billion in slush funds.

The region’s overall lack of accountability in arms purchases — and sellers’ unwillingness to abide by international export controls to unstable countries — means many weapons are ending up in the hands of militant groups such as the Islamic State, Syrian rebel groups, Hezbollah, and Houthi rebels in Yemen, fueling conflict in the region.

Dixon argues that if Western governments are truly interested in dealing with the roots of radicalization, examining corruption in the arms trade would be a very good place to start.

The corruption of the ruling elite in many countries in the region is one of the most constant themes in jihadi ideology, with groups actively recruiting young people fed up with their Western-backed governments’ corruption.

“The Houthis were able to take over as quickly as they were because the population didn’t back the government — because it was a government that they didn’t see as acting in their interests,” Dixon said. “A government that doesn’t serve the public is a dangerous place to pour in weapons or assistance.”

Obvious signs of corruption also lead to poor morale in state security services, particularly when they find themselves outgunned by groups like the Islamic State.

Andrew Smith, a spokesperson for the Campaign Against Arms Trade, a U.K.-based NGO, said that the countries selling the weapons also have an interest in maintaining obscurity over who is buying what weapons and why.

Saudi Arabia has used British and American weaponry to help Bahrain quash unarmed protesters in 2011, and is now using its sophisticated weaponry against impoverished Yemeni civilians. Yet only last month, the British government invited the country to its London arms fair.

“There’s almost nothing the Saudis could do to stop British sales,” Smith said.

“Corruption is endemic within the arms trade, and that’s because of the individuals and companies involved,” he said. “As long as governments are profiting from the sales, they’re not likely to do anything.”