Despite their signs of devotion to criminal justice reform, the Koch brothers continue to finance tough-on-crime politics. 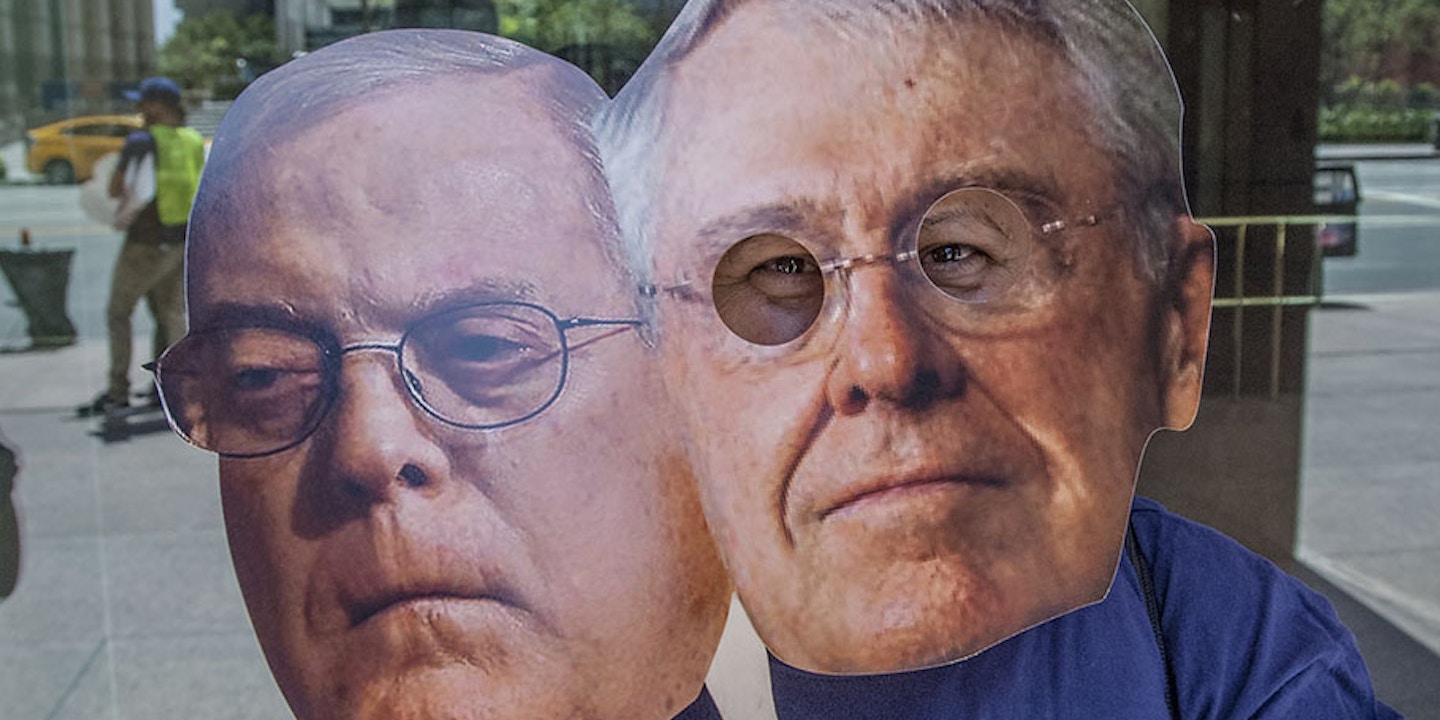 It’s a story political journalists couldn’t resist. Reporters at the New York Times, Politico, Yahoo News, and other outlets have been rhapsodizing lately about how the ultra-conservative billionaire Koch brothers are “braving the spotlight” and joining forces with “tree-hugging liberals” to dedicate themselves to the cause of ending America’s over-incarceration crisis.

Koch money is helping finance advertisements across the state of Pennsylvania calling for judges to hand out tougher sentences, like this one:

In Louisiana, Koch money is supporting the gubernatorial bid of Republican David Vitter, who is now campaigning explicitly against criminal justice reform with a new ad that warns that President Obama’s clemency project will release “dangerous thugs”:

Koch Industries has been widely hailed for donating to the National Association of Criminal Defense Lawyers and partnering with groups such as Families Against Mandatory Minimums. Earlier this year, the Kochs helped launch the Coalition for Public Safety, a bipartisan group focused on educational events on the issue of criminal justice that now provides funding to the Center for American Progress and other left-leaning groups.

“We have in the past and will in the future have criticism of the policy agenda of the Koch brother companies, but where we can find common ground on issues, we will go forward,” Neera Tanden, CAP’s president, told the New York Times.

But there is little evidence to show that the Koch political network has made criminal justice a litmus test for candidates or a priority for their vast political machinery.

The Koch political network does a great deal to publicly evaluate politicians on a narrow set of issues, including legislative score cards and pledges signed by candidates.

Those efforts are all still largely centered on climate change, tax and regulatory policies, with no mention of criminal justice reform.

Out of 38 federal lobbyists employed by Koch, only one is registered to work on criminal justice issues. Most work on projects important to Koch Industries’ bottom line, such as rolling back Environmental Protection Agency rules.

Koch’s interest in criminal justice reform was sparked not by the plight of overcrowded prisons or racial disparities in law enforcement, but by the company’s own environmental crimes. In 2000, Koch was indicted over claims that it had polluted huge amounts of benzene, a known carcinogen, from a Texas refinery and then attempted to cover up the crime. The indictment came on the heels of a series of state and federal probes that had forced the company to pay what was then the largest civil penalty for violations of environmental law for allowing hundreds of oil spills across six states.

By the time the benzene case went to trial, George W. Bush, with Koch support, had been elected president, and his Department of Justice reduced the indictment to seven counts, finally settling the case for only $20 million in what reporters called a “sweetheart deal.”

Koch Industries’ Senior Vice President Mark Holden, the public face of the Koch effort on criminal justice reform, did not respond to a request for comment.

One dynamic driving the over-incarceration problem, most experts agree, is the fear of “soft on crime”-style political attacks, made famous through the “Willie Horton” campaign commercial in 1988. Judges and politicians on both sides of the aisle have responded by looking “tough on crime” — by throwing more people in prison for longer.

Research by Emory Law School professors Joanna Shepherd and Michael Kang found that the more ads that are run attacking a judge for being “soft on crime,” the likelihood that the judge will rule in favor of criminal defendants decreases, leading to longer prison sentences regardless of the alleged crime.

Koch Industries provided $100,000 to a political committee airing an ad that claims that a Democratic judge in Pennsylvania failed to “keep our children safe” by allowing a “young girl to be placed in the custody of a convicted murderer.” The committee is also sponsoring ads that ask voters to support Republican judges because they “deliver on keeping violent criminals behind bars.”

The Republican State Leadership Committee, which is sponsoring the group behind the pro-Republican judicial ads, is funded this year by Koch Industries, General Electric, General Motors, Eli Lilly and other large corporations that have lobbied to minimize awards against them in class-action suits.

“The collateral damage is to criminal justice reform,” Menendez said.

Charles Koch has applauded the initiative the ad criticizes. He’s even faulted the program for not acting quickly enough to release thousands from prison.

But that hasn’t stopped Koch Industries from donating to Vitter, who has championed environmental and tax policies in line with Koch Industries’ lobbying operation. Vitter, a strong opponent of the clemency project and other criminal justice reforms, has received thousands of dollars in donations from the Koch PAC, in addition to support from Koch Industries in his race for governor. The Super PAC supporting Vitter’s bid also received $25,000 from Koch Industries.