Threats and Violent Attacks Against Muslims in the U.S., Just From This Week

There is, it turns out, a serious problem of domestic terrorism in the U.S., but it’s not the kind that typically receives attention or concern.

This week in the United States:

Arson at a Palm Springs mosque: 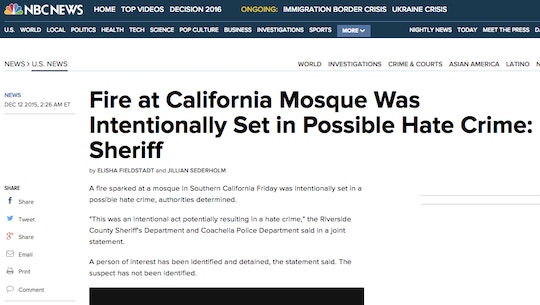 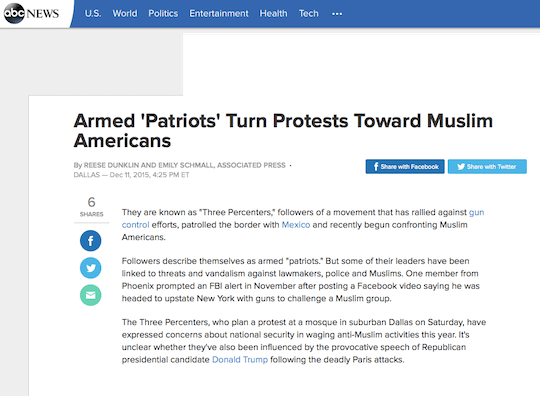 The Ku Klux Klan vows to “fight the spread of Islam” in the U.S.: 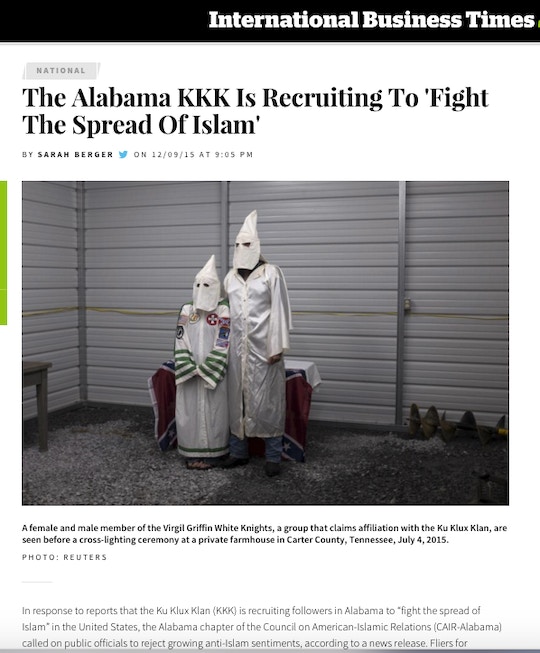 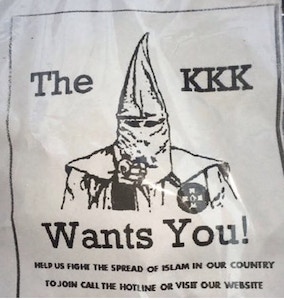 Muslim hijab-wearing middle school student asked by teacher if she has a bomb: Woman hurls slurs and hot coffee at Muslims praying in a California park: 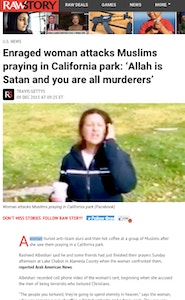 This is just from the last week: It does not include the spate of similar and even worse attacks on Muslims and mosques in the U.S. prior to December 8, such the multiple gunshots fired at a Connecticut mosque in the wake of the November Paris attack, or the bullet-ridden Quran left outside an Islamic store in Anaheim in the wake of the San Bernardino shootings. Nor does it include the large number of similar incidents outside the U.S. but in the West, such as the attack on a 22-year-old Muslim woman riding on a bus last week in Birmingham, England, or the vandalization of a mosque in Townsville, Australia, yesterday, or the removal of Muslims from public transportation both in the U.S. and U.K. Nor does it include cases where the cause is not yet known, such as the death last week of a 16-year-old Seattle Muslim student who either fell or was thrown from a roof.

Three weeks ago, CAIR revealed that it “has received more reports about acts of Islamophobic discrimination, intimidation, threats, and violence targeting American Muslims (or those perceived to be Muslim) and Islamic institutions in the past week-and-a-half than during any other limited period of time since the 9/11 terror attacks.” As CNN’s Ben Brumfield reported earlier this week, “Xenophobic bile has poured out against peaceful, law-abiding Americans who practice Islam.” CNN’s religion reporter Daniel Burke yesterday wrote that 2015 “has been one of the most intensely anti-Muslim periods in American history.”

There are numerous causes, most of them obvious: 14 years of nonstop war waged by the U.S. and its allies in predominantly Western countries; the U.S. media’s mainstreaming of anti-Muslim polemicists; the bile unleashed and legitimized by the Trump campaign; the vile and deeply irresponsible rhetoric coming from U.S. politicians such as Democratic Rep. (and Senate candidate) Loretta Sanchez of California; the attempts to exploit attacks in Paris and San Bernardino for long-standing agendas designed to demonize Muslims and Islam. But whatever the causes, just imagine what it’s like to be an American Muslim living under these threats and attacks.

These sentiments are by no means universal and there are some positive stories of Americans pushing back. Some anonymous non-Muslims are leaving notes of support at their local mosques and Islamic community centers. Jeff Flake, the conservative GOP Mormon senator from Arizona, attended a prayer service last night at a Scottsdale mosque and vehemently condemned anti-Muslim rhetoric. Some conservative figures are eloquently denouncing the emerging anti-Muslim bile.

But all of that is being drowned by these growing and deeply menacing trends aimed at American Muslims. The events speak for themselves. There is, it turns out, a serious problem of domestic terrorism in the U.S., but it’s not the kind that typically receives attention or concern.

Credit to the anti-Islamophobia activist Imraan Siddiqi for coverage of many of these stories.