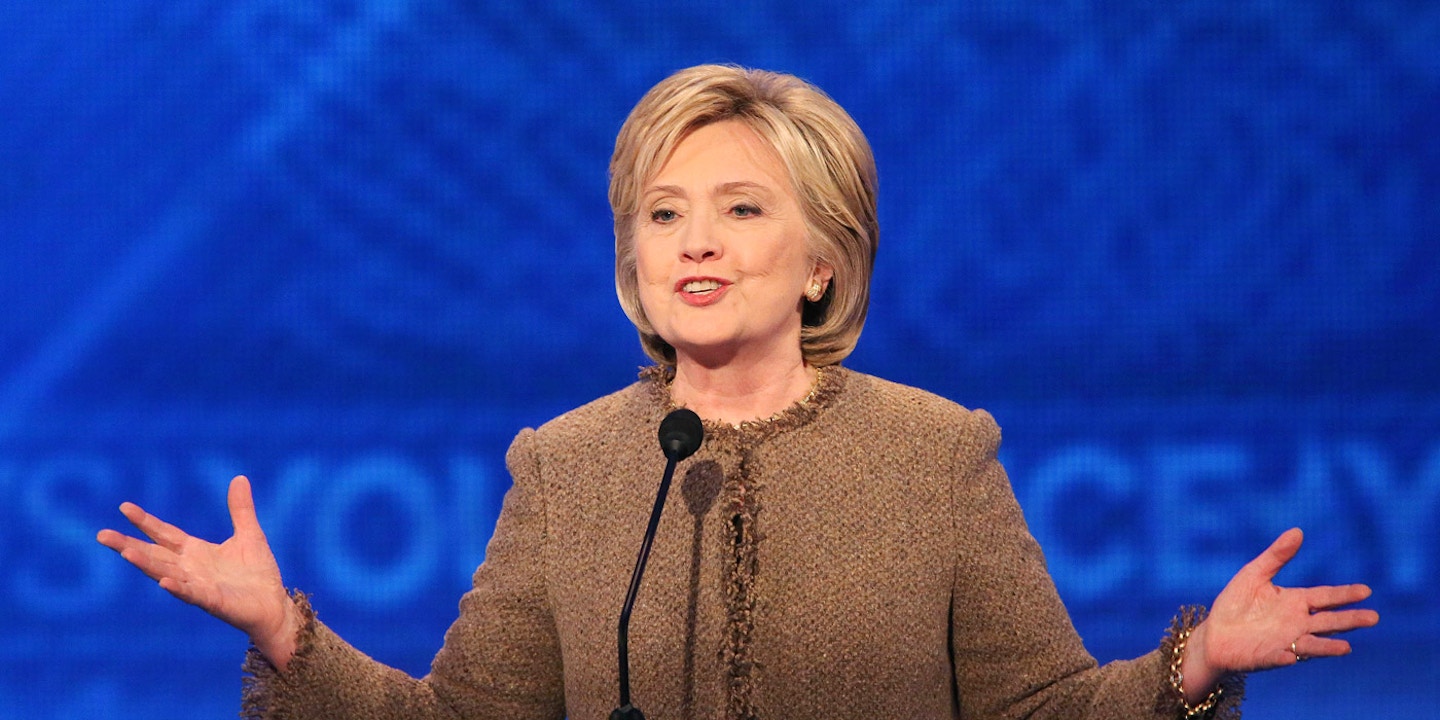 Clinton was largely parroting a popular FBI talking point that’s been highly publicized following the terrorist attacks in Paris and San Bernardino — that encryption is law enforcement’s Achilles heel in preventing crime — though there’s no evidence encryption enabled the plots to go undetected.

Encryption is basically math — in some cases installed by default — that protects online communications and sensitive information from being intercepted and exploited, both in transit and at rest on devices. End-to-end encryption garbles messages into random characters and makes it so that the message is only decipherable by the receiver — who has the key to decrypt it. In this case, even companies can’t hand over plain text of their customers’ messages.

And because of that, law enforcement argues, the government needs some sort of a way in — a “backdoor,” “front door,” or “golden key” — to stop the bad guys in their tracks. For months, FBI Director James Comey has been proclaiming his wish for some sort of magical solution to allow law enforcement access to encrypted communications. Comey has repeatedly insisted that smart people working on technology simply need to try harder, or be incentivized properly.

But technologists and cryptographers have been saying for years that it’s impossible — without severely handicapping the protection encryption affords its users. Clinton gave no details on what an encryption Manhattan Project would involve, except uniting the techies in Silicon Valley with government spooks.

Clinton’s statements about encryption echoed Comey’s earlier statements. “I would hope that, given the extraordinary capacities that the tech community has and the legitimate needs and questions from law enforcement, that there could be a Manhattan-like project, something that would bring the government and the tech communities together to see they’re not adversaries, they’ve got to be partners,” Clinton said during Saturday’s Democratic debate.

“It doesn’t do anybody any good if terrorists can move toward encrypted communication that no law enforcement agency can break into before or after. There must be some way,” she insisted.

Clinton acknowledged the concern that installing “backdoors” would create a hole in encryption that could be exploited for malicious purposes. But she added, “I don’t know enough about the technology … to be able to say what [the solution] is.”

Clinton continued to say that “law enforcement is blind — blind before, blind during, and unfortunately, in many instances, blind after” a crime because of encryption.

Yet the government has never presented a clear case where encryption has crippled a critical terrorism investigation, and law enforcement has other investigative tools in its arsenal — like traditional informants and tips, for example. Even when encryption is present, there is evidence that the FBI and other government agencies can hack into suspects’ computers and phones — bypassing encryption entirely.

Clinton, while clinging to the fantasyland technical solution, did not call for a legislative solution. “I would not want to go to that point,” she said when moderator Martha Raddatz asked if she would “force” Apple CEO Tim Cook into giving law enforcement a key into encrypted communications “by making it law.”

The White House, facing pressure from the civil liberties and digital rights communities, has also decided not to seek legislation — for now.

FBI Director Comey, in the meantime, has switched tactics from wishing for a magical technical solution to calling on companies to simply change their business model and stop using end-to-end encryption altogether — a scarier proposition in many ways.

“It’s not a technical issue,” he said during a Senate Judiciary Committee hearing earlier this month. “It’s a business model question. The question we have to ask is: Should they change their business model?”

Raddatz, ABC News’ chief global affairs correspondent, framed her questions in the debate as being about encryption as a “new terrorist tool used in Paris.” But criminals and terrorists have been using encryption for years, and encryption is also used legitimately by people around the world to protect sensitive information.

Clinton’s comments drew swift criticism from technologists and civil liberties advocates. Apple CEO Tim Cook, whose products provide strong encryption by default, including via iMessage, went on 60 Minutes over the weekend to reaffirm his view that a backdoor could cause more potential harm than good. “If there’s a way to get in, then somebody will find the way in,” Cook said. “I don’t believe that the trade-off here is privacy versus national security,” Cook told Charlie Rose. “I think that’s an overly simplistic view. We’re America. We should have both.”

Edward Snowden, who told The Intercept in an emailed statement in July that Apple should continue fighting the government to preserve encryption, also criticized Clinton’s debate remarks. “Hillary just terrified everyone with an Internet connection,” he tweeted.

“No matter how good the reason, if the U.S. sets the precedent that Apple has to compromise the security of a customer in response to a piece of government paper, what can they do when the government is China and the customer is the Dalai Lama?” he wrote to The Intercept in July.

“Clinton backs off on backdoors but still insists we need a Manhattan Project-level effort to find magical ‘solution’ to encryption. #sigh,” tweeted Kevin Bankston, director of the Open Technology Institute.

In an email to The Intercept, Amie Stepanovich, U.S. policy manager for digital rights group Access Now, argued that devoting resources to cracking encryption would only serve to harm secure online communications.

“The first Manhattan Project was born out of war and resulted in the ultimate weapon of mass destruction, creating a world where we are ever on the brink of destruction,” she wrote. “A second Project, aimed at undermining our digital security, is, quite simply, a horrible notion.”