Ironically, the rhetoric the Texas Republican senator is using against present-day refugees echoes that used against Cuban refugees like his own parents during the 1960s. 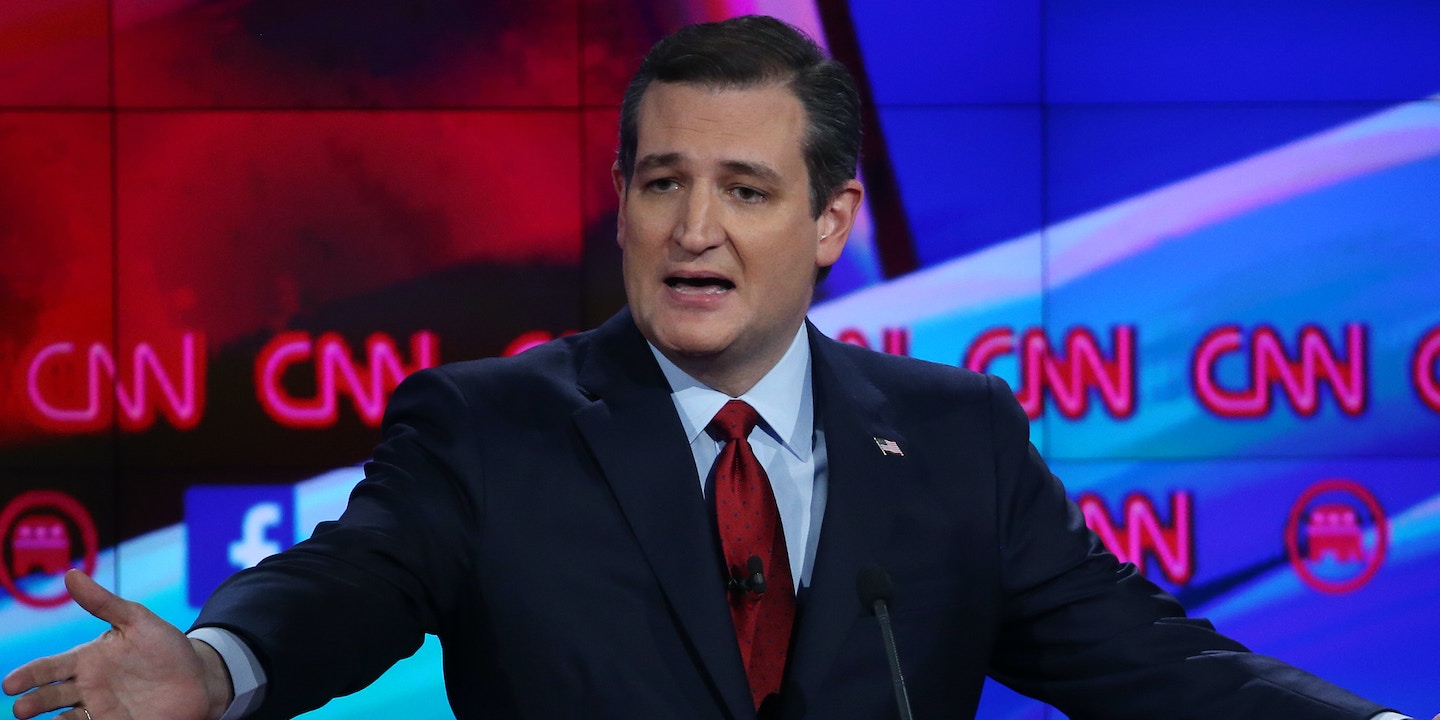 Cruz has made many similar remarks before. During an October campaign stop he (inaccurately) claimed, “There is a reason the director of national intelligence said among those refugees are no doubt a significant number of ISIS terrorists … jihadists that are coming here to murder innocent Americans.”

Ironically, the rhetoric the Texas senator is using against present-day refugees echoes that used against Cuban refugees like his own parents (as well as Jewish refugees during World War II).

The disconnect between his own family history and the restrictions he is advocating for others was raised last month by CNN’s Dana Bash, who asked Cruz, “What would have happened if your father was trying to get from Cuba to the United States and the political leaders here said: ‘Nope, we don’t think so, because who knows, maybe you could be somebody who could, you know, commit crimes against America’?”

Cruz replied: “If my father were part of a theocratic and political movement like radical Islamism that promotes murdering anyone who doesn’t share your extreme faith or forcibly converting them, then it would have made perfect sense.”

In other words, Cruz’s message is that Syrian refugees are a special and particularly severe threat to the United States, while no one ever feared such dangers would arise from Cuban refugees.

This is inaccurate. While the United States ultimately established a generous policy for Cuban refugees in an attempt to undermine the Fidel Castro government, this policy was questioned by many in the American political system who feared that Cuban refugees were communist infiltrators or dangerous criminals.

The first major wave of refugees from Cuba came to the United States immediately after the 1959 revolution. By the end of 1961, 100,000 Cubans had arrived on American soil.

SUERO: Even if the Immigration Department is doing great work on that, it is very difficult to avoid the entrance of some of them. Some of them are Castroites. Some others of them are sent by the same government, and it is very hard to screen them to see if they are or not. But I must confess that there are a lot of Castroites.

DE HAAN: Are there many of these clubs in Miami, the 26th of July clubs? …

SUERO: Well, as a matter of fact, you know, all the time we have people that have been Fidelists coming back, some of them, who were top men in the government. How can you really make a sure statement that that gentleman has ceased to be a Fidelist and is today feeling for democracy, or really they are infiltrators? It is a very hard situation, and we have all kinds of men from the Army, men from the militia, men from government, workers belonging to unions. Every day you read in some papers that they came in a boat or so, or they came in by some other way. So maybe there are Castroist influencing or certainly trying to create problems, not only in Miami. That is the case in New York also.

The fear of dangerous communist infiltrators among Cuban refugees continued for years. Below is an article that ran in the St. Petersburg Evening Independent on June 25, 1963, claiming that a Senate investigation had found that “hundreds of Moscow-trained agents are entering the U.S. as Cuban refugees”:

Concerns about Cuban refugees flared again in 1980 during what came to be known as the Mariel Boatlift when Castro relaxed policy on leaving the island, spurring an exodus of 125,000 Cubans. The influx took the United States by surprise, with then-President Jimmy Carter failing to convince Castro to stem the tide after it surfaced that Castro had included convicted criminals in the refugee flow. That year, 70 percent of Americans told CBS/New York Times pollsters that they disapproved of allowing recent Cuban refugees to settle in the United States, with only a quarter of Americans indicating their approval.

Some Cubans in detention centers rebelled, taking hostages and rioting. Then-Arkansas Gov. Bill Clinton’s electoral defeat in 1980 has largely been pinned on the rioting of refugees at Fort Chafee, south of Fayetteville.

These fears were exaggerated by Hollywood, which quickly played up the small number of professional criminals who arrived with the Cubans with films such as 1983’s Scarface, which featured Al Pacino as a Cuban refugee-turned-gangster with a penchant for cocaine and mass murder.

In an interview after a recent event in his district with about 100 Syrian refugees, Rep. Hank Johnson, D-Georgia, said about Cruz: “His father is a Cuban refugee. To want to slam the door on refugees wherever they might come from, just discriminating based on where they might be coming from, is just totally, it’s terrible. It’s bad. It’s deplorable, it’s detestable, it’s unconscionable. They’re doing it knowing full well that they are trying to stoke the fears and ignorance of people.”