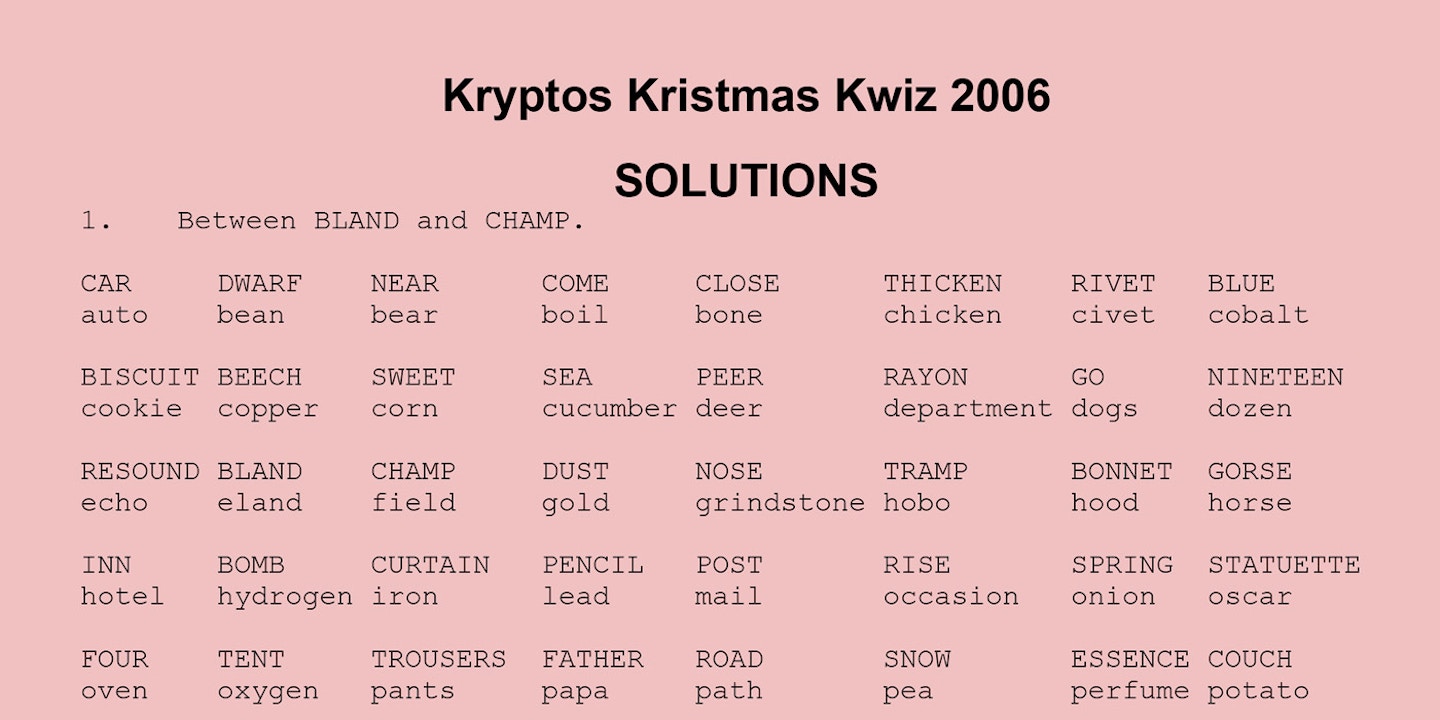 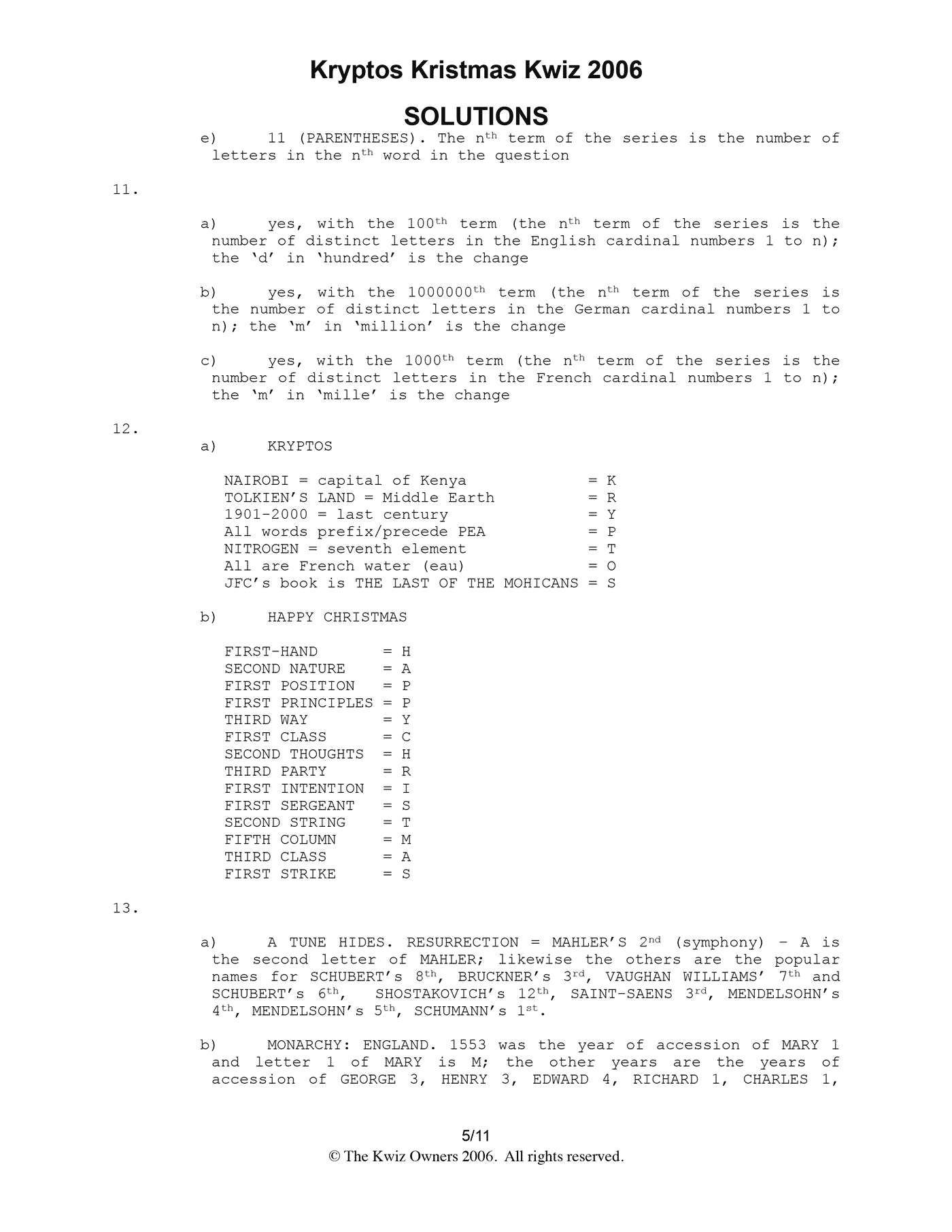 Frankly, Intercept, it always seemed a curious bit of almost recruiting-booth bait. Why would anyone not already known for such ability – wish putting themselves on that particular radar by solving GCHQ’s little KKKwiz here, even if almost a decade old?

Some kinds of paranoia are especially stupid.

As Micah likes to say everything depends on your personal threat profile. Your implication here, minus than the smug ad hominem, appears to ask what motive might NSA / GCHQ have for wanting to find possible encryption savants not already known or working for them.
I’m forced to ask in response, in what world do you live?

In my opinion this disgraceful report by Sky News on the execution of Sheikh Nimr Baqir al-Nimr by Saudi Arabia labelled him unfairly and unjustly as a terrorist, when in reality the only crimes which he was charged with were “disobeying the ruler” “inciting sectarian strife” and encouraging and leading demonstrations” The report fails to mention that under Saudi Arabian anti terrorist law a person can be executed for just calling for atheist thought or for inciting protests or participating in them, or for any correspondence or contact with any individuals or groups deemed hostile to the Kingdom. Whilst some of those executed may well ” have been detained after a series of attacks by Al Qaeda between 2003 and 2006 in which hundreds of people were killed” the charges against many of the executed were not for the mentioned attacks or for terrorist killings. The report by Sky fails to criticize the vague and often quite minor acts that a person can be executed for under the Saudi Arabian 2014 Anti Terrorism Act, and merely publishing a report with the title “Saudi executes 47 people convicted of terrorism although factually correct is misleading unless the Saudi definition of acts of terrorism are properly explained.

This earlier report by Corra Currier of The Intercept, which provided a report that was blocked by Al Jazeera ,before these latest barbaric executions, illustrates accurately “How Saudi Arabia uses terrorism as an excuse for human rights abuses” :

I hope that the Intercept will document exactly what terrorist, or other crimes the 47 executed were accused or convicted of, and that they will continue to challenge any unfair reports by the Associated Press which may follow.

Lets be clear he was not executed by Saudi Arabia but by the USA.
I can not even lift a finger unless my brain agrees with my intent.

Don’t spread such lies. We don’t like the idea of the quick head-chopping business. We like to first drug and then inject, even though it may take a bit longer. Head-chopping is for savages.

depending on the way it is carried out, a beheading is probably far less painful and cruel than some of the lethal injections.

You are right James, since they are close allies, and there is no difference between them either- they make great bed partners. Both oppressive, imperialistic, both are implementing a strategy to stir up sectarian tensions in the Middle East, and both are rogue state Global terrorists. Their game plan remains the same keep killing and perpetuating tensions, pouring more fuel on the flames of terrorism, creating more fear of terrorism, whilst creating more terrorists (those who seek revenge) for unjust executions or for the loss of their loved ones through the bombing of civillian areas, cluster bombs in Yemen, bombing in Syria, Iraq, Afghanistan) so that the self perpetuated “war on terror” can continue unabated.

I recently read the great book “Kill anything that moves the real American war in Vietnam” by Nick Turse recently and it is a thoroughly well researched, and groundbreaking investigation into the workings of the US military machine, documenting daily war crimes, and the slaughter of hundreds of thousands of Vietnamese civillians. It is a book that finally should bring every American face to face with the truth about the Vietnam war. The book helped me to understand more about what is going on today, and how America’s war profiteering and Imperialism is the same today. I was aware. like many, of the well documented My Lai massacre in Vietnam, but the book proves that such war crimes were being committed daily, and that the slaughter was systematic, and the results of orders and kill head count targets with incentives. The book shows that the truth has been hidden by the mass media and the US military.

Saudi Grand Mufti Sheikh Abdul Aziz Al-Asheikh said on Saturday that the executions were based on the teachings of the Holy Qur’an and Hadith. “It was required for integrity and stability, and in defense of peace, properties, sanctities and minds,” he said in a statement to Saudi television channel.
“This (execution) has served one of the several objectives for which Islam has come. These objectives include religion, life, sanctity, mind and wealth,” he said. The grand mufti said that implementation of the guidelines of Islam was necessary for the prevention of the mischief and chaos in their ranks.

Now we can take this straight from the Grand Mufti appointed by the Guardian of the Two Mosques: wealth is an objective that can be justly served by execution. If you believe in a religion founded by a pirate, you end up believing stuff like that!

Our reaction to this should not be to pick up the Great White Burden and try to defend a side. Do I know if Nimr al-Nimr shot live rounds at police or crashed into a cop car trying to escape? Do I know if he was in such fear for his life I could call it self-defense? No. All I know is that the Saudi system is all rotten, starting with the religion it is based on.

What I think we should accept is, oh, about a 35% tariff on the import or export of bulk fossil fuels to or from North America, supposing we can get Canada and (optionally) Mexico to agree. I don’t really like the oil industry, but I’d rather our own domestic oil drillers go ahead and claim a reliable livelihood, even at the cost of higher gas prices, if it means we have the peace of mind to know that we don’t have to think about what happens in the Middle East unless whatever goes on with pricing gets absolutely ridiculous. Hope and Islam are never natives of the same country … we should try to disengage at all levels with that part of the world, and no longer concern ourselves with trying to control — let alone command — its daily massacres. There’s nothing for us there – nothing that doesn’t cost more than it’s worth in due time.

Wnt -Thank you for your replay, and for the report from the Arab News. As I said before I would like to see a full list of all those executed, with a detailed examination of the crimes they were accused of, and this should be published for all the World to see.The BBC like many of the other Western Associated Press seems keen to draw attention to a few of the executed that were convicted of serious acts of terrorism that killed or injured people. However, 47 people were executed in one day, and at least 151 people were executed last year also, and many more are still awaiting execution for minor offences Saudi Arabia has massively increased the number of executions in the past year, and many people including foreigners, have been executed for petty crimes- for just being human rights protestors, or for merely opposing the rulers of the Kingdom. It is alarming that the Saudi Anti Terrorism Act of 2014 is so vague, and that the Associated Press has failed to draw attention to what Saudi Arabia defines as terrorism. To me it is totally unacceptable to publish a report with a headline like “Saudi Arabia executes 47 terrorists” without providing information on their terrorist crimes, and what they were convicted of. Saudi Arabia continues to execute adolescents and even to sentence people to death for apostasy, like the poet Ashraf Fayadh. President Obama, and the UK Prime Minister, David Cameron have failed to intervene or to pressure Saudi Arabia to improve its respect of Human Rights. The UK in fact made a deal to ensure Saudi Arabia was admitted to the Human Rights Council, and as the Intercept reported this was also an appointment that was welcomed by the US State Department. Why is it that the US and UK want to maintain such close relations with what is perhaps one of the very worst abusers of Human Rights ? I praise the brave work of the journalists at the Intercept for their fearless and truthful, honest, revealing journalism.

Sloppy redaction. Mr Wood is apparently one of the Kryptos team members who set the 2006 kwiz.

Nobody wanted to put their name on this one.

I am dismayed that none of the kwestions are remotely related to the Muslim terrorists’ languages like Arabic or Turki. No wonder they are not able to identify terror chats and instead catch our own congressmen chatting with our Israeli friends.

Thanks & Happy New Year to the entire team!!! A meager four points only… Anyways, that this may be the year Edward Snowden is set free!! All the best :)