One Map That Explains the Dangerous Saudi-Iranian Conflict

Due to a peculiar correlation of religious history and anaerobic decomposition of plankton, almost all the Persian Gulf’s fossil fuels are located underneath Shiites. 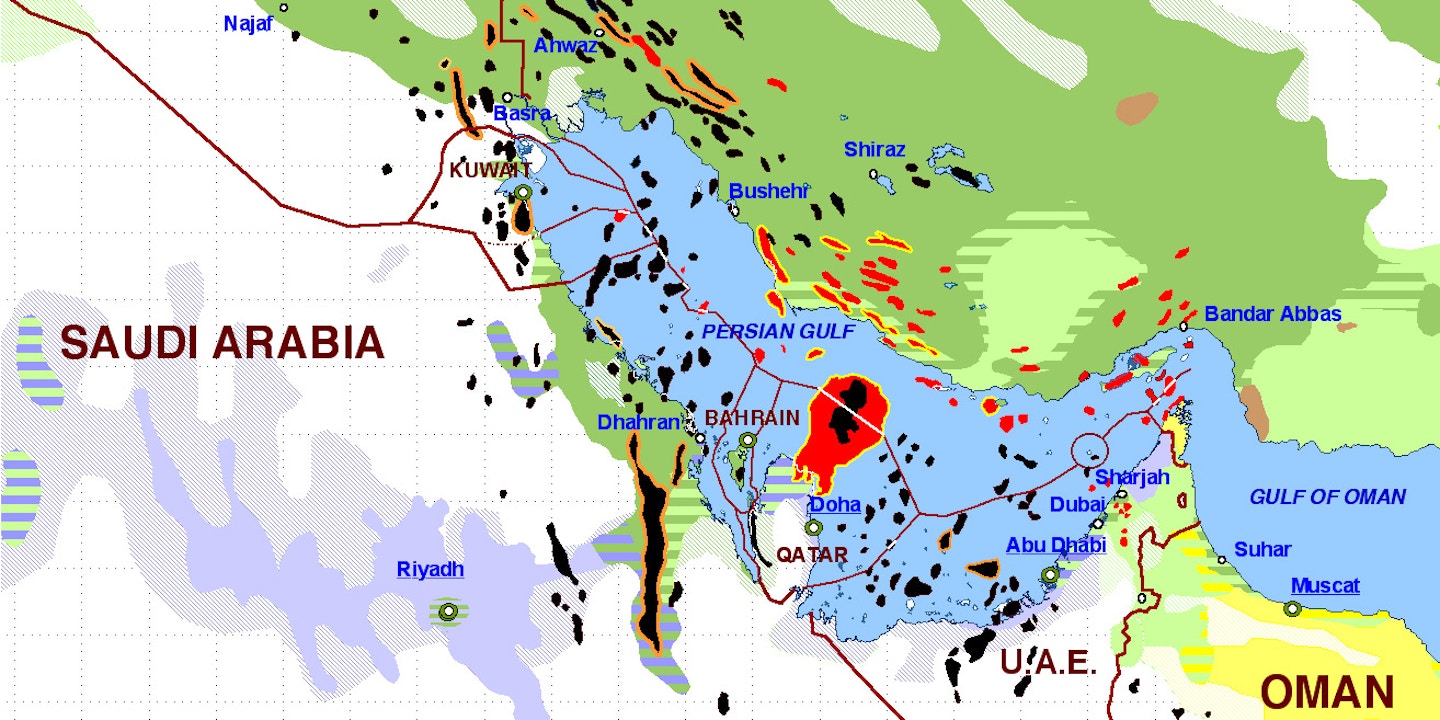 The Kingdom of Saudi Arabia executed Shiite Muslim cleric Nimr al-Nimr on Saturday. Hours later, Iranian protestors set fire to the Saudi embassy in Tehran. On Sunday, the Saudi government, which considers itself the guardian of Sunni Islam, cut diplomatic ties with Iran, which is a Shiite Muslim theocracy.

To explain what’s going on, the New York Times provided a primer on the difference between Sunni and Shiite Islam, informing us that “a schism emerged after the death of the Prophet Muhammad in 632” — i.e., 1,383 years ago.

But to the degree that the current crisis has anything to do with religion, it’s much less about whether Abu Bakr or Ali was Muhammad’s rightful successor and much more about who’s going to control something more concrete right now: oil.

In fact, much of the conflict can be explained by a fascinating map created by M.R. Izady, a cartographer and adjunct master professor at the U.S. Air Force Special Operations School/Joint Special Operations University in Florida.

What the map shows is that, due to a peculiar correlation of religious history and anaerobic decomposition of plankton, almost all the Persian Gulf’s fossil fuels are located underneath Shiites. This is true even in Sunni Saudi Arabia, where the major oil fields are in the Eastern Province, which has a majority Shiite population.

As a result, one of the Saudi royal family’s deepest fears is that one day Saudi Shiites will secede, with their oil, and ally with Shiite Iran.

This fear has only grown since the 2003 U.S. invasion of Iraq overturned Saddam Hussein’s minority Sunni regime, and empowered the pro-Iranian Shiite majority. Nimr himself said in 2009 that Saudi Shiites would call for secession if the Saudi government didn’t improve its treatment of them. The map shows religious populations in the Middle East and proven developed oil and gas reserves. Click to view the full map of the wider region. The dark green areas are predominantly Shiite; light green predominantly Sunni; and purple predominantly Wahhabi/Salafi, a branch of Sunnis. The black and red areas represent oil and gas deposits, respectively.

As Izady’s map so strikingly demonstrates, essentially all of the Saudi oil wealth is located in a small sliver of its territory whose occupants are predominantly Shiite. (Nimr, for instance, lived in Awamiyya, in the heart of the Saudi oil region just northwest of Bahrain.) If this section of eastern Saudi Arabia were to break away, the Saudi royals would just be some broke 80-year-olds with nothing left but a lot of beard dye and Viagra prescriptions.

Nimr’s execution can be partly explained by the Saudis’ desperation to stamp out any sign of independent thinking among the country’s Shiites.

The same tension explains why Saudi Arabia helped Bahrain, an oil-rich, majority-Shiite country ruled by a Sunni monarchy, crush its version of the Arab Spring in 2011.

Similar calculations were behind George H.W. Bush’s decision to stand by while Saddam Hussein put down an insurrection by Iraqi Shiites at the end of the Gulf War. As New York Times columnist Thomas Friedman explained at the time, Saddam had “held Iraq together, much to the satisfaction of the American allies Turkey and Saudi Arabia.”

Of course, it’s too simple to say that everything happening between Saudis and Iranians can be traced back to oil. Disdain and even hate for Shiites seem to be part of the DNA of Saudi Arabia’s peculiarly sectarian and belligerent version of Islam. In 1802, 136 years before oil was discovered in Saudi Arabia, the ideological predecessors to the modern Saudi state sacked Karbala, a city now in present-day Iraq and holy to Shiites. The attackers massacred thousands and plundered the tomb of Husayn ibn Ali, one of the most important figures in Shiite Islam.

Without fossil fuels, however, this sectarianism toward Shiites would likely be less intense today. And it would definitely be less well-financed. Winston Churchill once described Iran’s oil – which the U.K. was busy stealing at the time — as “a prize from fairyland far beyond our brightest hopes.”

Churchill was right, but didn’t realize that this was the kind of fairytale whose treasures carry a terrible curse.

Correction: March 11, 2016
A previous version of this post stated that George H.W. Bush made a “decision to stand by while Saddam Hussein used chemical weapons in 1991 to put down an insurrection by Iraqi Shiites at the end of the Gulf War.” While Bush did stand by while the insurrection was put down, and the Iraqi government did use a limited amount of chemical weapons to do it, the Bush administration in fact publicly threatened to bomb any Iraqi units using chemical weapons against rebelling Iraqi Shiites or Kurds. We regret the error.
Wait! Before you go on about your day, ask yourself: How likely is it that the story you just read would have been produced by a different news outlet if The Intercept hadn’t done it? Consider what the world of media would look like without The Intercept. Who would hold party elites accountable to the values they proclaim to have? How many covert wars, miscarriages of justice, and dystopian technologies would remain hidden if our reporters weren’t on the beat? The kind of reporting we do is essential to democracy, but it is not easy, cheap, or profitable. The Intercept is an independent nonprofit news outlet. We don’t have ads, so we depend on our members — 35,000 and counting — to help us hold the powerful to account. Joining is simple and doesn’t need to cost a lot: You can become a sustaining member for as little as $3 or $5 a month. That’s all it takes to support the journalism you rely on.Become a Member