Matthew Bissonnette, a former Navy SEAL who shot Osama bin Laden and wrote a bestselling book about the raid, is now the subject of a criminal investigation into whether he used his position as an elite commando for personal profit while on active duty. 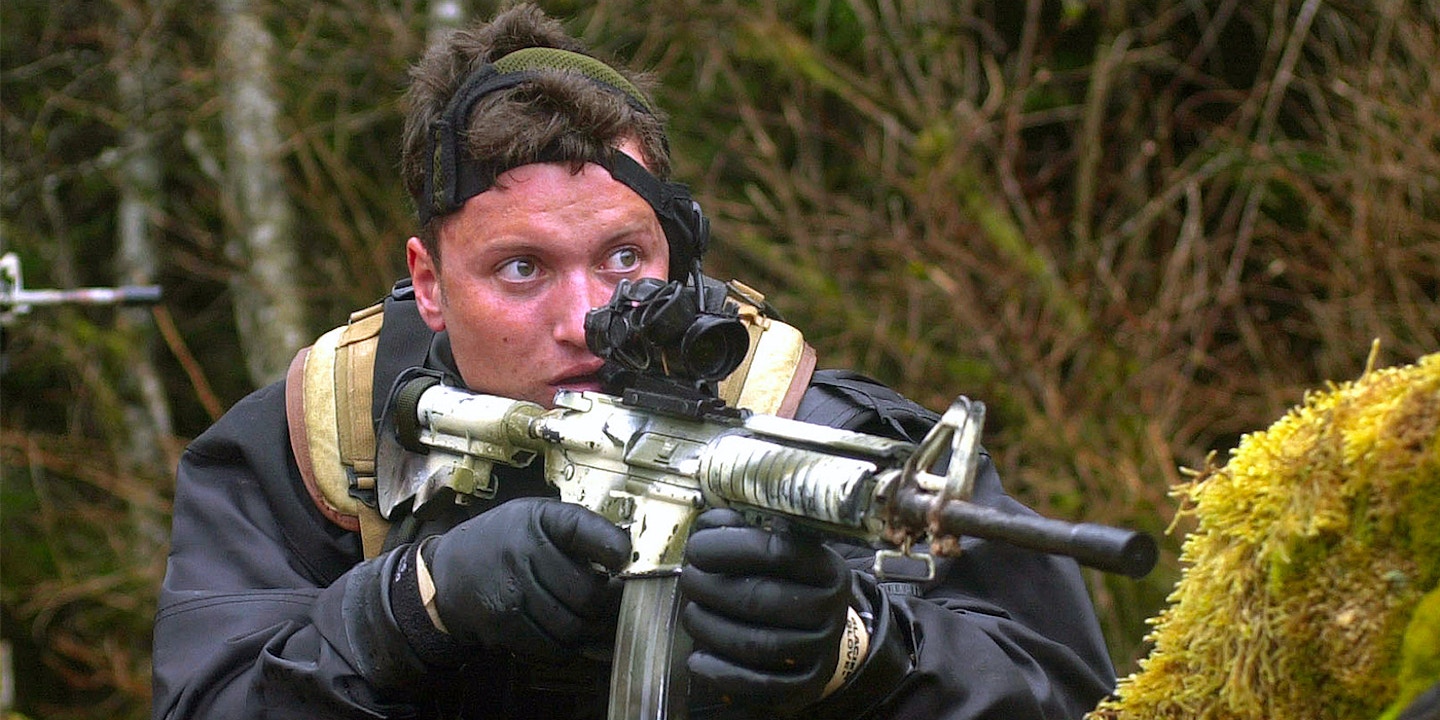 A FORMER NAVY SEAL who shot Osama bin Laden and wrote a bestselling book about the raid is now the subject of a widening federal criminal investigation into whether he used his position as an elite commando for personal profit while on active duty, according to two people familiar with the case.

Matthew Bissonnette, the former SEAL and author of No Easy Day, a firsthand account of the 2011 bin Laden operation, had already been under investigation by both the Justice Department and the Navy for revealing classified information. The two people familiar with the probe said the current investigation, led by the Naval Criminal Investigative Service, expanded after Bissonnette agreed to hand over a hard drive containing an unauthorized photo of the al Qaeda leader’s corpse. The government has fought to keep pictures of bin Laden’s body from being made public for what it claims are national security reasons.

The retired SEAL voluntarily provided investigators with a copy of his hard drive as part of an agreement not to prosecute him for unlawfully possessing classified material, according to the two people familiar with the deal.

The two people who spoke about the case, and other former SEALs The Intercept interviewed about Bissonnette, asked that their names not be used because they were describing an ongoing investigation and classified matters.

“I can confirm that the criminal investigation of Mr. Bissonnette for alleged wrongful handling or disclosure of classified information was closed through declination by the DOJ in August 2015,” said Robert Luskin, an attorney who represents Bissonnette.

Luskin said that he had negotiated a deal in 2014 with the Pentagon and the Justice Department to hand over to the government some of the millions of dollars in book profits Bissonnette had received.

He would not confirm Bissonnette’s possession of the bin Laden photo or whether any investigation still remains open.

During their search of his hard drive, investigators subsequently found emails and records dealing with Bissonnette’s work as a consultant while he was on active duty at SEAL Team 6. Those records, which were not part of the non-prosecution agreement, led to the widening probe. Federal investigators then became interested in whether Bissonnette’s business ventures with companies that supply military equipment — including companies whose products were used by SEAL Team 6 — were helped by his role in the elite unit’s procurement process, according to one of the people familiar with the case.

Element Group, a company Bissonnette helped set up in Virginia Beach about five years ago, is among the companies NCIS is said to be investigating. According to a former SEAL Team 6 operator familiar with Element Group’s business arrangements, the firm, which has since been shut down, designed prototypes for, and advised, private companies that make sporting and tactical equipment.

According to several former SEAL Team operators familiar with the company, Element Group also did business with at least one Defense Department contractor that sold equipment to SEAL Team 6. The defense contractor, Atlantic Diving Supply, or ADS, has military supply and equipment contracts with SEAL Team 6, according to several former SEAL Team 6 operators, as well as other parts of the departments of Defense and Homeland Security. Federal investigators have been looking into the business relationship between Element Group and ADS.

ADS did not respond to a request for comment.

According to one of the people briefed on the case, investigators have uncovered payments of at least several hundred thousand dollars from ADS to Element Group, and are trying to determine what services Bissonnette and Element Group provided to ADS. The relationship with ADS raised ethical concerns among leaders at SEAL Team 6 when they first learned about it in 2011, because ADS was a significant supplier to the unit, according to two former senior SEAL leaders.

Investigators have sought to understand if Bissonnette’s role at SEAL Team 6 as a liaison for the command to suppliers of technology and equipment might have been influenced by his business contracts, according to the two people familiar with the probe. Bissonnette’s position often put him in direct contact with manufacturers and suppliers outside the military in order to assess and evaluate what equipment was needed for classified training exercises and missions.

“Biss was part of the procurement process,” said a former SEAL Team 6 operator who has been interviewed by federal investigators about his relationship with Bissonnette. “It was natural for him to deal with companies making our gear.”

Bissonnette enlisted four teammates to join Element Group as consultants, according to several former members of SEAL Team 6. One SEAL who joined the company will soon retire from the military as a result of his involvement with Bissonnette and Element Group. That SEAL — who was also on the bin Laden raid — was given a non-judicial punishment by the Navy that ended his military career but allows for an honorable discharge, according to one of the two people familiar with the case.

“The goal [of Element Group] was to work with the sporting industry,” said the former SEAL Team 6 operator who has been interviewed by investigators. Element Group, for example, “designed prototypes for sleeping bags and a tent system” that would be sold commercially.

“The goal was to become a commercial enterprise,” the former operator said, “not be involved with anything in the military or the command’s procurement process.”

Bissonnette was seen as a rising star within the SEAL Team 6 command. According to several former SEAL Team 6 operators, he was once described by his commanding officer as the model for naval commandos: smart, discriminating, and lethal. Bissonnette has said in public interviews that the same officer now refuses to speak to him.

According to two retired SEAL Team 6 operators, Bissonnette’s name has been added to a rock kept at the Virginia Beach SEAL Team 6 base. The rock is used to mark former members who are no longer welcome at the command, including former SEALs who have violated a series of unwritten codes of conduct among the unit.

The publication of No Easy Day in September 2012, just a few months after Bissonnette was honorably discharged from the Navy, broke the unwritten code of silence among members of the special operations community. SEALs sign nondisclosure agreements about their work, and even beyond the legal ramifications of violating those agreements, former SEAL Team 6 members who speak publicly about their battlefield exploits are often ostracized by their peers.

The book also led to a string of internal Navy investigations, according to several former SEAL Team 6 operators.

The publication of the book, which hit the New York Times bestseller list, took Bissonnette’s unit and the Pentagon by surprise. Bissonnette later acknowledged in interviews that he violated military rules that required him to allow the Defense Department to review his manuscript prior to publication. He has since sued an attorney he consulted, claiming the lawyer advised him the manuscript did not have to be reviewed by the Pentagon. The lawyer, Kevin Podlaski, did not respond to a message requesting comment.

Shortly after the publication of No Easy Day, Bissonnette’s unit began looking into the business dealings he had conducted while he was on active duty, according to several former SEAL Team 6 operators.

“During his exit [from the Navy] we found out he had other companies and side deals going on,” said the former SEAL Team 6 operator who has been interviewed for the investigation. “That’s when Element Group shut down.”

The Navy discovered Bissonnette organized a group of fellow SEAL Team 6 operators to consult for the video game Medal of Honor: Warfighter, and participated in the filming of promotional videos for the game in 2012, according to multiple former SEALs. In 2012, in a non-judicial process called a captain’s mast, the command punished seven active duty SEALs for revealing sensitive information and using Defense Department equipment. At least two SEALs were removed from the unit, and another two were forced to retire as a result, according to several former members of SEAL Team 6.

Bissonnette’s former SEAL Team 6 colleague who was interviewed by federal investigators said he hasn’t spoken to him since the publication of No Easy Day.

“He’s brought a lot of trouble to people who trusted him,” the colleague said.