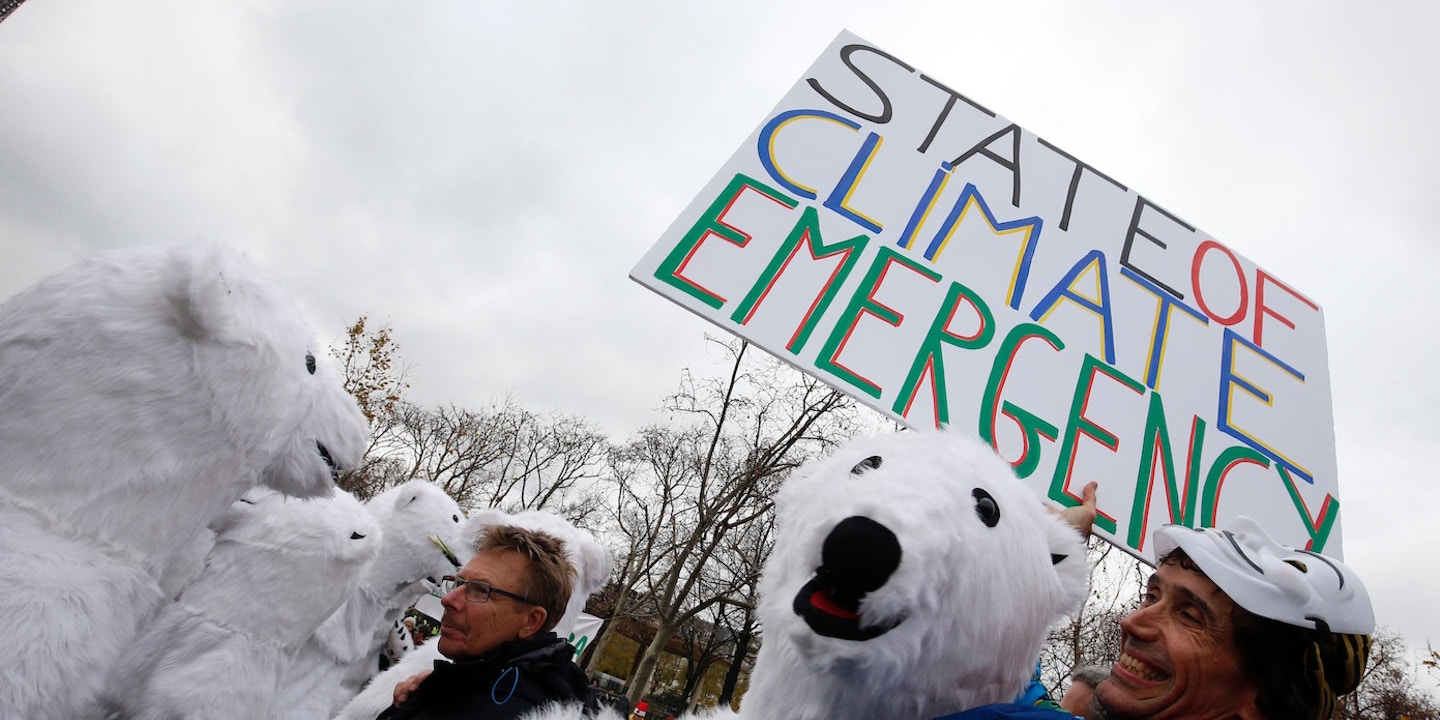 The Republican presidential candidates were asked about the Super Bowl but not the future of the planet Saturday night — there were no questions about climate change or global warming in the debate in St. Anselm College in New Hampshire.

Angelo Carusone, who works for pro-Hillary Clinton groups American Bridge and Media Matters, offered one possible reason why: The debate was sponsored by Big Oil: Vote4Energy is a campaign of the American Petroleum Institute, the fossil fuel industry’s enormously powerful lobbying and trade association.

And you thought there would be?

I will vote in the GOP primary and I don’t see why it is so important to ask tyhe GW question to this group of candidates. I have watched 1 debate and only half of that debate.

I already know the positions of these candidates so I’m not sure why progressives think it is so important to ask a question that less than 10% of the people think is an important issue at this time.

The progressives do themselves harm when they make predictions and then predictions don’t come true. Also, when NASA changes temperatures in the database doesn’t help.

And how does this work exactly?

Do the big oil guys summon the moderators and demand that they don’t talk about global worming? Just curious. What’s the process?

By the way, I stopped flying airlines when they started checking shoes and banned ‘water’. Do the anti-wormists avoid all forms of motorized transportation if it’s using ‘oil’? They can still fly solar aeroplanes and helium balloons and drive bikes, right?

There was no need to ask them, sadly. The GOP bunch have made clear in prior debates, with rare exceptions, that they would not even acknowledge its existence (other than some nefarious plan by Obama to tax Job Creators and kill Jobs and make the rest of us all gay Muslim hippies or whatnot), let alone push a damn inch against our impending climate doom.

First, why do you have to go to a Clinton campaigner to come up with topics for an article? Not only that, but this article is a joke that probably took you 30 seconds to put together. Hardly something worthy of the Intercept.

Second, this is a GOP debate. No one in the GOP cares about climate change, so there’s no reason to bring it up. You can try to turn it into a Big Oil conspiracy all you want, but it’s not.

Questions about climate change or global warming may signal a privileged position while having civil wars, immigration and clash of cultures on the menu.

The US Imp-GOPtent are the only group who deny ACD in the entire world! What did anyone expect different? Chev/exxo fuelees pay $4,000.00 to $8,000.00 more by the time their pov reaches an hundred thousand miles. For an addtive ‘no better’ or worse, they are all the same and x3 costs <one cent/gallon. Lot$a to lose!

With all due respect, anyone wishing to learn about climate change could probably invest their time more wisely than asking questions of the Republican candidates.

However, this is not to deny that Trump’s plan to build a wall to keep out global warming does have merit.

I strikes me as odd that the biggest existential threat facing us isn’t even mentioned in the debate. And this isn’t the first. Does the GOP think that the climate crisis will go away if they don’t mention it or ignore it completely?? Is the influence of big energy money to big to allow a discussion of utmost importance to American voters? In 30 years or so will they be the ones pointed to that were the last that could do something, but didn’t?? These are real problems that won’t ever go away and these idiots won’t even discuss the “problem”. I shouldn’t care because I don’t have children, but I do, for the planet, for wildlife, and yes, for humans in that order. Please someone do something, anything.

And the article states, “Angelo Carusone, who works for pro-Hillary Clinton groups American Bridge and Media Matters, offered one possible reason why: The debate was sponsored by Big Oil”

But I thought Hillary said in the last debate that money didn’t buy influence?

No, she said it doesn’t influence her. She alone is infallible.

“…….The Republican presidential candidates were asked about the Super Bowl but not the future of the planet Saturday night — there were no questions about climate change or global warming in the debate in St. Anselm College in New Hampshire……”

When it comes to lowering the cost of doing business for our international competitors and shipping jobs overseas, we continue to shoot ourselves in the foot. Of course, it is all done in the name of saving our planet – even if it means lowering our standard of living. Coal, oil, oil sands and oil shale and natural gas are relatively cheap and plentiful sources of energy, but we are hell bent on using more expensive, subsidized energy sources which will take decades to replace the current energy industry. China just about manufactures everything we use while expanding the use of coal.

“…….Coal, the most carbon-intensive of the fossil fuels, accounts for 70 percent of energy used in China today and is responsible for about three quarters of electricity generation…..”

“……….And according to U.S. government projections, China will add yet another U.S. worth of coal plants over the next 10 years, or the equivalent of a new 600-megawatt plant every 10 days for 10 years………”

Cheap energy costs are just one way that the Chinese undercut western manufacturing and business. Additionally, labor is cheap and safety and environmental standards are well below western requirements. All these add up to ensure that corporations move jobs from the west to the more competitive third world markets. And you wonder why tax breaks for (hated) corporations are important.

If saving the planet is really the intent (in articles like this one), then the Intercept needs to expand beyond the America is responsible for everything story and hold all governments responsible (just like it says in the mission statement).

The typical nationalist argument, which is to find someone who at the moment is worse than us when it comes to the environment. The CO2 content of the atmosphere integrates up over time, and if you bothered to compute that integral, you’d find that although China is currently emitting more greenhouse gasses than the US, over the history of the industrial revolution and since, the US has far outstripped every other nation.

Your point of view also ignores the efforts of other nations where, despite not being the biggest polluters, serious efforts have already been underway for over a decade to reduce greenhouse gas emissions and convert to renewable energy sources.

American jingoists are accustomed to beating their chests proclaiming how great we are, but our greatness apparently is not evaluated on the basis of actually leading by example.

“……..and if you bothered to compute that integral, you’d find that although China is currently emitting more greenhouse gasses than the US, over the history of the industrial revolution and since, the US has far outstripped every other nation……”

Well, there is always a price to be paid for progress. No one understands that better than the Chinese which has some of the worst pollution on the planet – yet the wealth of the Chinese continues to grow. The Chinese – as you mentioned – emit the most carbon on the planet and it is going to get worse before it gets better. If you want to solve climate change hold everyone to the same standard, or else this begins to look a lot like reparations – and that is something no good Republican should support.

Why do you think others aren’t held to the same standard? If you advocate that your government do something — because that’s where you have influence — it doesn’t mean you don’t care about what other governments do to the planet. Also, this is an issue that affects the entire species, so tribal attitudes like yours aren’t helpful. Advocating the continued use of fossil fuels is not helpful. Denying climate science, as Republicans do as part of their platform, is also not helpful. These sorts of attitudes spread globally.

“……Why do you think others aren’t held to the same standard? If you advocate that your government do something — because that’s where you have influence — it doesn’t mean you don’t care about what other governments do to the planet……”

Quit continually giving the Intercept an excuse for their clear anti-American agenda. At the very least, they should change their mission statement to reflect their focus (as I have written countless other times). Finally, it’s a good thing Amnesty International doesn’t think the way you do, right?

Absolutely. I’m not Amnesty International and neither is The Intercept, and it would be pretentious to claim otherwise. Amnesty is supposed to have influence on all governments on Earth. That’s their function. It’s different to the function of journalists and ordinary citizens.

Then Jose, for the 400th time, they should change their mission statement which states:

“……We believe journalism should bring transparency and accountability to powerful governmental and corporate institutions…..”

Last time I checked, Syria, Iran and Russia are “governments” which are currently oppressing populations or involved in wars that are creating refugees. The Intercept has over thirty “journalists” that are paid by the billionaire, Omidyar – and they are NOT doing their job.

If saving the planet is really the intent

Everyone should just relax. The planet will outlive the human race.

The woolly mammoth used to worry itself sick about global warming – a lot of good it did it.

“…….The woolly mammoth used to worry itself sick about global warming – a lot of good it did it…….”

“……It disappeared from its mainland range at the end of the Pleistocene 10,000 years ago, most likely through climate change and consequent shrinkage of its habitat, hunting by humans, or a combination of the two…….”

You are working especially hard on this one, Craig. Did Exxon/Mobil give you a bonus?

No need to be a conspiracy theorist, Zaid. Climate change has not been a topic at any of the republican debates as far as I know, independent of who is sponsoring the broadcast. To be fair, you should also indicate how much of the democrat debates has been devoted to the topic.

Even dumber animals know the consequences of biting hands that feed them.

All of this global warming nonsense aside, who do you like in the Super Bowl Zaid?

I don’t watch football. I’m rooting for the cute one in the Kitten Bowl though.

The cute one is always a good bet (Paws attraction).