Clinton campaigns as a guardian of President Obama’s progressive legacy, while many people in her campaign worked for business interests trying to undermine it. 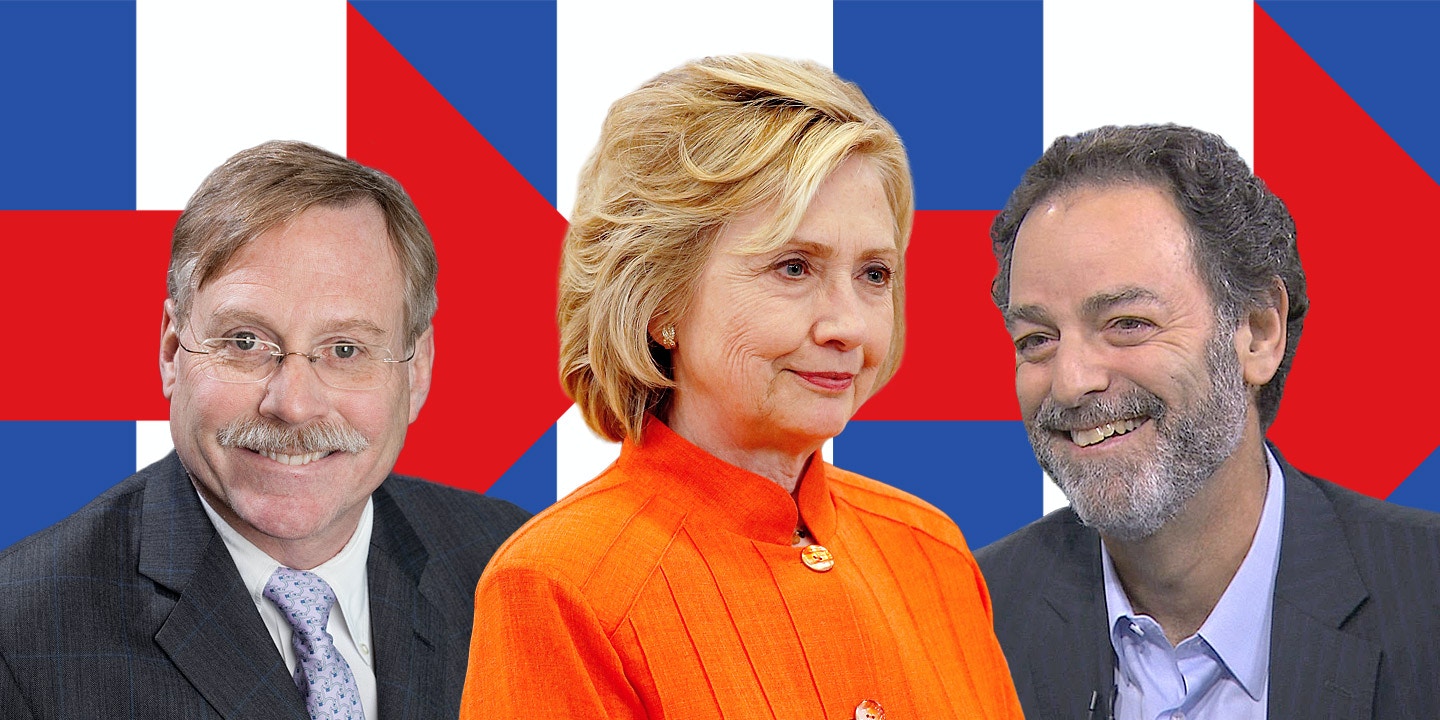 Hillary Clinton is campaigning as a guardian of President Barack Obama’s progressive policy accomplishments. In recent weeks, she has called the Affordable Care Act “one of the greatest accomplishments of President Obama, of the Democratic Party, and of our country,” and promised that she is “going to defend Dodd-Frank” and “defend President Obama for taking on Wall Street.”

Meanwhile, however, Clinton’s campaign has been relying on a team of strategists and fundraisers, many of whom spent much of the last seven years as consultants or lobbyists for business interests working to obstruct Obama’s agenda in those two areas.

Consultants associated with the Dewey Square Group, a lobbying firm that has been retained by business interests to defeat a variety of progressive reforms, are playing a major role in the Clinton campaign. Charles Baker III, the co-founder of Dewey, is a senior strategist and the campaign’s chief administrative officer. Michael Whouley, another Dewey co-founder, played an early role in advising Clinton’s plan for the current campaign by convening some of the very first strategy sessions. Senior Dewey officials Jill Alper and Minyon Moore are also close advisers and fundraisers for Clinton, while at least four other Clinton officials have worked at Dewey within the last four years. In addition, disclosures show that Clinton’s Super PACs Priorities USA Action and Correct the Record have also paid Dewey Square Group for a variety of services in this election.

Dewey, for instance, worked on behalf of the health insurance industry during the health reform debate, specifically to block the changes to Medicare Advantage that were critical for financing the Affordable Care Act. Medicare Advantage, which allows Medicare beneficiaries to use plans administered by private insurers, had long served as a cash cow for the health insurance industry. By one estimate, insurance companies over-billed the government by nearly $70 billion in improper payments over just a five year period. Dewey, which had been tapped to by health insurers to block cuts from the program starting in 2007, continued during the Obama era to lobby to protect Medicare Advantage, even as such reforms became a major part of how Democrats and the Obama administration sought to finance the Affordable Care Act.

One of the more deceptive components of the Dewey lobbying strategy was uncovered when an editor at the Lawrence, Massachusetts, Eagle-Tribune realized that the firm had worked quietly to place letters to the editor against cuts to Medicare Advantage under the names of elderly Massachusetts residents without their knowledge or consent.

Last year, ProPublica’s Alec MacGillis pressed America’s Health Insurance Plans, a major private health insurance lobby group that had retained Dewey, over the controversy. AHIP’s spokesperson brushed off the fake letter incident as the work of an intern and told MacGillis that AHIP ended its relationship with Dewey back in 2008, before the letters were sent. But tax documents reviewed by The Intercept show that a state-level health insurance lobby group called the Massachusetts Association of Health Plans, which represents the same major health insurance firms as AHIP, continued to pay Dewey throughout 2009 to 2012 for “grassroots” consulting.

“I don’t have any comment for your piece,” wrote Ginny Terzano, a spokesperson for Dewey, in response to an inquiry from The Intercept.

In 2009, Dewey was also retained by the National Restaurant Association, which at the time was lobbying aggressively to block health reform rules to require employers to provide health coverage to their employees. The National Restaurant Association, derided by labor activists as “the other NRA” for its role in lobbying against efforts to raise the minimum wage, paid Dewey $772,110 that year. Charles Baker, the Dewey co-founder who now serves as a senior strategist to the Clinton campaign, was also registered to influence health reform on behalf of the Medicines Company, a drug firm.

Other lobbyists now closely associated with the Clinton campaign were active in the fight against Obama’s health reforms.

Heather Podesta is one of the most prolific fundraisers for the Clinton campaign, having personally raised at least $348,581, according to recently filed disclosures. In 2009 and 2010, Podesta worked as lobbyist for the health insurance company Cigna. While working for Cigna to influence the health reform bill, Cigna was one of several large health insurers to secretly provide over $86 million in secret payments used to air negative television and radio advertisements to defeat the law. Heather Podesta is one of several lobbyists now fundraising for the campaign who previously worked for insurance interests to influence health reform. Irene Bueno, a fundraiser who raised $26,675, lobbied on behalf of CareMore (a division of health insurer Anthem) and Blue Shield of California to influence health reform as the bill was being debated. Bueno and Podesta did not respond to a request for comment.

On financial reform, Clinton has similarly tied herself to Obama’s legacy. Speaking with MSNBC’s Rachel Maddow last month, Clinton asserted that on Dodd-Frank, Obama’s financial reform legislation, she is one of the “many Democrats” who are “fighting to prevent it from being turned back.”

Clinton’s inner circle, however, has lobbied to help obstruct and roll back many of Dodd-Frank’s signature reforms.

Last month, Benenson convened a conference call with reporters to “deride Bernie Sanders for airing an ad that criticized Wall Street firms and the politicians who accept their donations,” according to a report from International Business Times. As IBTimes reported, Benenson has also represented JPMorgan Chase and Bank of America, among other corporate clients.

Steve Elmendorf, a campaign adviser and fundraiser who has collected $30,505 for Clinton, was retained by Goldman Sachs as one of the bank’s “primary lobbyists” working to weaken the Dodd-Frank bill. Records show that after the bill was signed into law, Elmendorf continued to work on behalf of a number of Wall Street clients to ensure the implementation was favorable to financial industry interests. Elmendorf was tapped by Citigroup, for example, to help the House of Representatives pass the Swap Jurisdiction Clarity Act, a bill strongly supported by Republican leadership in Congress to allow banks to avoid financial regulations by moving some operations overseas — a change that experts say could lead to another financial meltdown.

Elmendorf is one of many lobbyists who worked to influence Dodd-Frank now helping the Clinton campaign raise cash. Dewey co-founder Charles Baker worked on a lobbying team with DLA Piper’s Matthew Bernstein, another major Clinton fundraiser, for Citizen Financial Group to help the bank lobby on Dodd-Frank. Disclosures show the efforts included work on the Volcker Rule, derivatives regulations, and rules concerning overdraft fees, many of the top concerns for the banking industry. Arshi Siddiqui, a lobbyist with Akin Gump Strauss Hauer & Feld who is currently helping to raise money for the Clinton campaign, worked to influence Dodd-Frank implementation on behalf of the Mortgage Bankers Association, according to disclosures. Tony Podesta, the brother of the Clinton campaign’s chairman and a fundraiser for the campaign, worked for Bank of America to influence Dodd-Frank, according to filings.

Most of the Clinton campaign fundraisers who lobbied on Dodd-Frank did not respond to a request for comment. When asked about the work, Tony Podesta emailed us to say, “Call B of A.” An inquiry to Bank of America was not returned.

There are other lobbyists on the Clinton campaign staff. T. LaDavia Drane, the Clinton campaign’s director of African-American outreach, previously worked as a lobbyist for a trade group that represents Pepsico and Hershey on issues related to obesity and advertising to children. Jeff Berman, a senior Clinton campaign official who is leading her delegate strategy, previously worked as a lobbyist for the private prison firm Geo Group, seeking to influence the federal budget, as well as working for TransCanada to help secure approval of the controversial Keystone XL pipeline.

Speaking to The Hill last year, Tony Podesta said that unlike President Obama, who instituted a ban on registered lobbyists in his administration, K Street will find a more welcome home in a Clinton White House.

Due to an editing error, an earlier version of this story stated that the Financial Services Forum paid Benenson Strategy Group to lobby. The firm says it was paid to consult, not lobby.