The FBI reported 440 “terror disruptions” in fiscal year 2015, more than three times the “target” of 125. But what does that even mean? 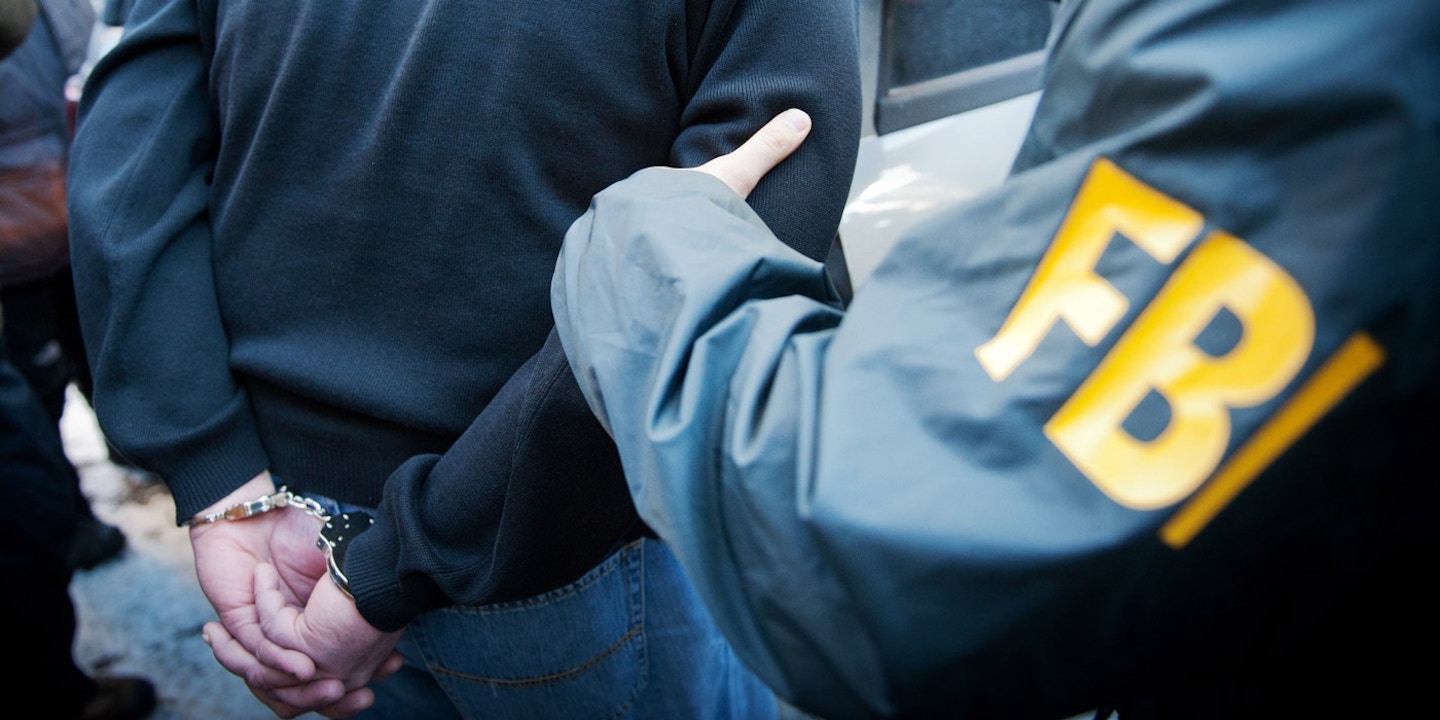 The Federal Bureau of Investigation has quietly developed a new way to measure its success in the war on terror: counting the number of terror threats it has “disrupted” in a year.

But good luck trying to figure out what that number means, how it was derived, or why it doesn’t jibe with any other law enforcement statistic, most notably, the number of terror suspects actually charged or arrested. In a vacuum, that would appear to suggest that the FBI’s terror-fighting mission — which sucked up $5.3 billion, or 54 percent of the bureau’s $9.8 billion budget in 2015 — is exceeding expectations.

But that number — 440 — is much higher than the number of arrests reported by the FBI. The Washington Post counted about 60 terror-related arrests in 2015; a study by George Washington University found 71 arrests related to the Islamic State from March 2014 to the end of 2015.

Of those arrests, many were of people trying to travel abroad or trying to help others do so. Many more involved people planning attacks that were essentially imaginary, often goaded by FBI informants.

And according to a document from the Department of Homeland Security obtained by The Intercept in November, there was only one genuinely “foiled attack” in the United States between January 2014 and September 2015. And that one, involving would-be shooters in Garland, Texas, targeting a cartoon-drawing event inspired by the Prophet Muhammad, was stopped by the local police department.

The FBI didn’t respond to emails asking basic questions such as what qualifies as a disruption, why the number is so much higher than the bureau’s recorded arrests, or how it comes up with its annual “target.”

In a January 2015 Performance Report, Justice Department officials explained that the “targets reflect the number of expected disruptions based on the estimated threat, yet account for potential fluctuations.”

The officials acknowledged that “disruptions can be a challenge to quantify for future years” because the number of potential plots is “outside of FBI control.” Nevertheless, they wrote: “Based on past data trends, coupled with current and emerging threat pictures, the FBI expects to achieve its FY 2015 and FY 2016 targets.”

A strange way to provide transparency

The “terrorism threat disruptions” metric is a relatively new arbiter of success for the FBI. In a 2013 Department of Justice document about strategic goals, fighting terrorism is identified as Strategic Goal 1, and “number of terrorism disruptions” is Strategic Objective 1.1.

“To provide transparency to its work in the area of counterterrorism, the Department will disclose a key statistic: the number of terrorism disruptions,” the department announced.

But the definition was vague: “A disruption is defined as interrupting or inhibiting a threat actor from engaging in criminal or national security related activity. A disruption is the result of direct actions and may include but is not limited to the arrest; seizure of assets; or impairing the operational capabilities of key threat actors.”

And the department’s idea of transparency was problematic. Because the FBI’s “operational priorities are classified,” the document noted, “it is only possible to report aggregate data that lacks significant detail.”

Experts interviewed by The Intercept suggested two possible explanations for the high number of terror disruptions.

One possibility, they said, is that the number is just a subjective way to make people at the FBI look good, or to rationalize the cost.

“This is how the whole career system works in the FBI — statistics, performance,” said Coleen Rowley, a former FBI agent and whistleblower. Individuals use statistics to advance their careers, and the agency, in turn, uses them to justify its budget, she said. “In the agency, this is the way to advance.”

The fact that the agency establishes a target for terrorism disruptions is also troubling, said Michael German, a former FBI agent and fellow with the Brennan Center for Justice. “That the FBI actually sets a performance goal stating the specific number of terrorist disruptions it wants to accomplish over the year would seem to create an incentive to gin up cases where no real threat might exist.”

And if the number is inflated, it wouldn’t be the first time the Department of Justice or the FBI had been criticized for inaccurately estimating the impact of their counterterrorism efforts.

In 2007, an inspector general investigation found that the entire Department of Justice — the FBI included — had messed up its bookkeeping efforts on terrorism. The FBI mistakenly included marriage fraud, immigration cases, and others in their records of anti-terror cases.

And in 2013, Inspector General Michael E. Horowitz called out the office that oversees U.S. attorney’s offices for shoddy reporting that significantly overstated the number of terrorism convictions, counting cases that actually dealt with narcotics or money laundering or including defendants who had their charges dismissed.

“These inaccuracies are important in part because DOJ management and Congress need accurate terrorism-related statistics to make informed operational and budgetary decisions,” Horowitz said in a statement accompanying the 2013 report.

Easier to disrupt than arrest

Another possible explanation for such a big number, however, is that it accurately reflects a new FBI approach to fighting terror that is occurring outside of public view — where the bureau decides someone is a threat and disrupts his or her life in some way that isn’t nearly as subject to oversight and accountability as an indictment or an arrest.

“I’m sensing a significant change in counterterrorism policy in the U.S., where we’ve gone from ‘watch and report,’ to ‘let’s just disrupt them any way we can,’” David Gomez, a former FBI agent and profiler, as well as a former LAPD officer, told The Intercept. “This has cut short the way the FBI does long-term investigations. … They’re not doing that anymore.”

The FBI has indeed been going through some changes.

As a 2013 Congressional Research Service report explains, “Since the September 11, 2001 (9/11) attacks, the FBI has implemented a series of reforms intended to transform itself from a largely reactive law enforcement agency focused on investigations of criminal activity into a more proactive, agile, flexible, and intelligence-driven agency that can prevent acts of terrorism.”

This has led law enforcement agencies to use aggressive, proactive techniques to catch potential terrorists before a crime is committed. According to the CRS report, one technique is the “Al Capone” approach — putting people in jail for a minor crime rather than sticking around and waiting for evidence of a serious violent threat.

Another method is the informant, or “agent provocateur,” who starts communicating with potential suspects, goading them into committing an act of terrorism in order to catch them in the act.

“Where the person targeted really is a terrorist, that might make sense,” said German. “But often when evidence that a person is a terrorist is lacking — that’s because he isn’t a terrorist.”

German, in an email, asked: “Has the FBI secretly prevented people from getting jobs, hazmat licenses, gun permits, security clearances, or barred their travel where no charges were brought, providing no opportunity for them to challenge the accusations against them or prove their innocence? And then chalked that up as a successful ‘disruption’ so they would get a pat on the back and more resources from Congress, regardless of whether the person was actually guilty?”

A 2009 FBI document obtained by the American Civil Liberties Union explicitly allows field offices to engage in “disruption strategies” at the conclusion of a terror assessment or investigation, after “all significant intelligence has been collected, and/or the threat is otherwise resolved.” Disruption strategy involves “a range of tools including arrests, interviews, or source-directed operations to effectively disrupt subject’s activities.”

“The FBI’s overbroad and aggressive use of its investigative and surveillance powers, and its willingness to employ ‘disruption strategies’ against subjects not charged with crimes can have serious, adverse impacts on innocent Americans,” the ACLU concluded.

“Being placed under investigation creates an intense psychological, and often financial, burden on the people under the microscope and their families, even when they are never charged with a crime,” it continued. “All the more so when a heinous crime like terrorism is alleged, and when the investigators are convinced the subject of their investigation is guilty but they just don’t have the evidence necessary for arrest.”

The Congressional Research Service report noted that such methods are reminiscent of the FBI under J. Edgar Hoover, and particularly the COINTELPRO program, which engaged in “preventive, covert, intelligence-based efforts to target and contain people, groups, or movements suspected by the Bureau to be ‘rabble rousers,’ ‘agitators,’ ‘key activists,’ or ‘key black extremists.’” The FBI “relied on illegal means to curb constitutionally protected activity it deemed threatening to national security.”

The goal of “disruption” has typically been reserved for FBI agents pursuing people like drug traffickers — where “impeding the normal and effective operation of the targeted organization, as indicated by changes in the organizational leadership and/or changes in methods of operation,” counts as disruption.

But that standard doesn’t really apply to the “lone wolves” or small groups that make up most of the FBI’s terror suspects.

The FBI is under a lot of pressure these days — charged with preventing every possible terrorist attack before it happens, while withstanding public scrutiny of its methods.

Gomez, the former FBI agent, cuts the bureau some slack. “As a policeman, we used to have a saying about local drug dealers — we put them in jail for everything, use of heroin, a misdemeanor,” Gomez said. “They’re doing life in prison 60 days at a time.”

The FBI is “going to be under severe criticism” one way or the other, he said. “You can’t win.”

Rowley, though critical of the strategy, said she was also sympathetic. “It’s a bad position of, oh, you better prevent every act of terrorism,” she said.