Shelters in the Jungle were set ablaze and tear gas and water cannons fired as refugees were forcibly removed. 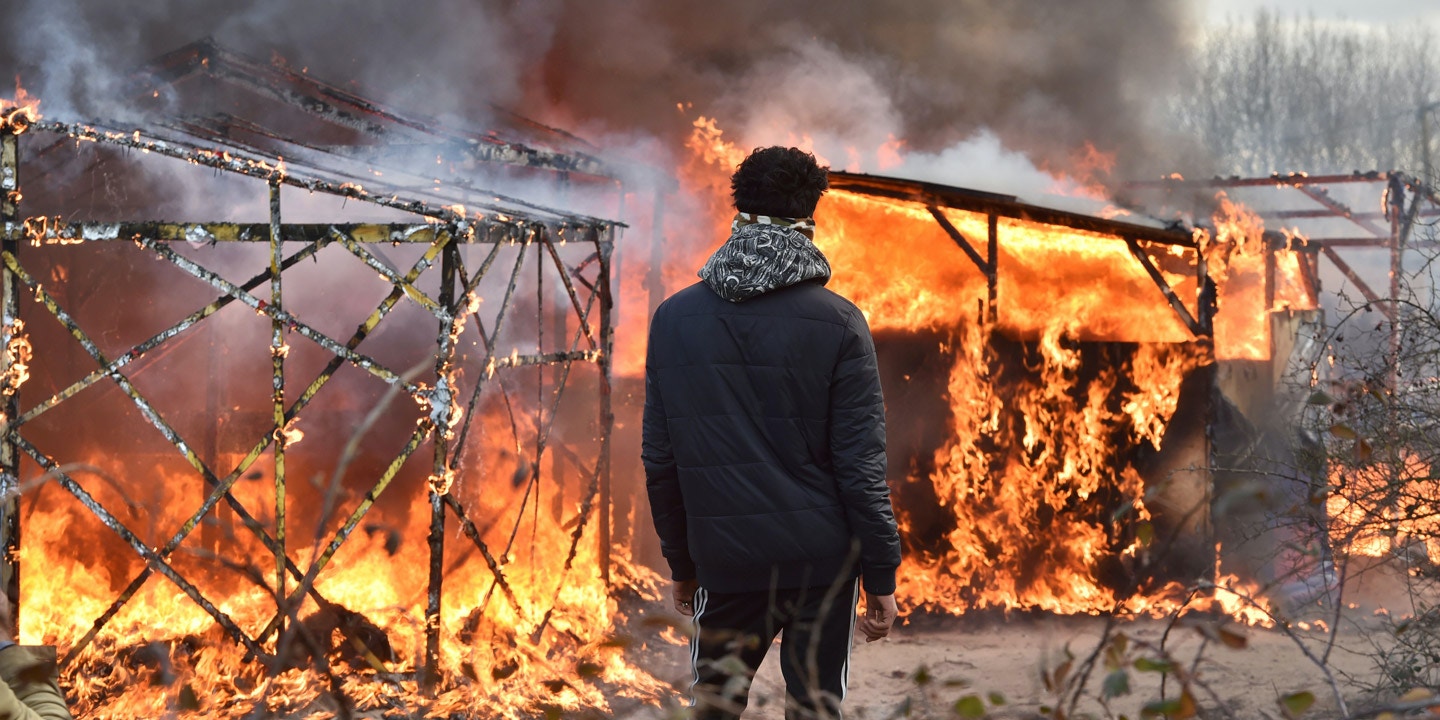 THE LATEST ROUND of evictions in the French refugee camp known as the “Jungle” has been marked by police violence, refugee protest, and an absence of communication between aid workers and local officials.

In an earlier eviction last January, asylum seekers and aid workers achieved a heroic feat as they peacefully moved around 1,500 people out of another section of the camp designated for clearance. (Read The Intercept’s report here.) But the latest eviction, which began Monday, looks very different so far.

“We’ve gone from trying to find out what the hell the prefecture are doing to emergency distribution of getaway bags for everyone here,” said Annie Gavrilescu, a volunteer with the organization L’Auberge. The bags contain small first aid kits, tinned fish, water, hats and scarves, and foil blankets. “We cannot move this many structures,” she added.

On Monday, structures were set ablaze and tear gas and water cannons fired, as refugees resisted moving. A number of residents sat in protest on the roofs of wooden housing that had been carefully built over the last couple months with teams of volunteers. Some of the protesters were forcibly removed.

Right now in the Jungle pic.twitter.com/zpHfGszyK8

The unsanctioned camp, located in Calais, France, is a jumping off point for asylum seekers from Syria, Afghanistan, Sudan, Eritrea, Iraq, and Iran attempting to sneak onto trains to cross the Channel Tunnel into the UK. It has grown to an estimated 5,500 people, who live in vinyl tents or makeshift wooden structures with inadequate sanitation, food, water, and warmth. A camp nearby, outside the town of Dunkirk, holds another 2,000 or so asylum seekers. The French government is seeking to reduce the Jungle’s population to 2,000 by convincing residents to apply for asylum in France or to return to their home countries.

The latest eviction is a continuation of a French policy of deterrence and forced removal that reflects increasing intolerance of refugees throughout Europe. Scenes similar to the ones in Calais played out in Macedonia on Monday as police fired tear gas at protesting refugees, who had been prevented from crossing out of Greece. As spring approaches, it’s unlikely that Europe’s influx of refugees will slow.

In Calais, aid workers were taken aback by the abruptness of the evictions, even after a court order Friday indicated that a disputed eviction plan would move forward. “We didn’t realize they would do it like this,” said Gavrilescu. “We didn’t know that they would do it so violently.”

“It’s very hard to reconcile what’s actually been done with what they said they were trying to do,” said Clare Moseley of the group Care for Calais. “The minute [refugees are] out of their homes, there is no concern or question about where they’re going. Their shelters are immediately destroyed in front of their eyes.”

Officials have said that 800 to 1,000 people live in the eviction area, but a census organized by the organizations Help Refugees and L’Auberge counted 3,455. “The official estimates are complete bullshit,” said Gavrilescu, who designed and ran the census.

What really shocked Gavrilescu, however, was the number of unaccompanied minors the census found. Of 445 children counted in the eviction zone, 305 were unaccompanied by adults. The youngest was 10 years old.

Officials have offered temporary accommodations to the evicted refugees in respite centers located around the country and have also opened a container camp on the Calais site, with room for up to 1,500 people. However, many of the container spaces were already filled before the latest round of evictions began. A number of the asylum seekers distrust the French and remain determined to reach the UK, because they speak English, have family there, or believe it’s the safest place to go.

Tuesday morning some asylum seekers continued to resist eviction. But overall, Moseley said, “Today was a lot quieter. The refugees have just given up.”