Aerial bombings in Yemen, supported by the U.S. military, have killed large numbers of civilians. A survivor of the latest attack, which killed more than 120, recounts what happened. 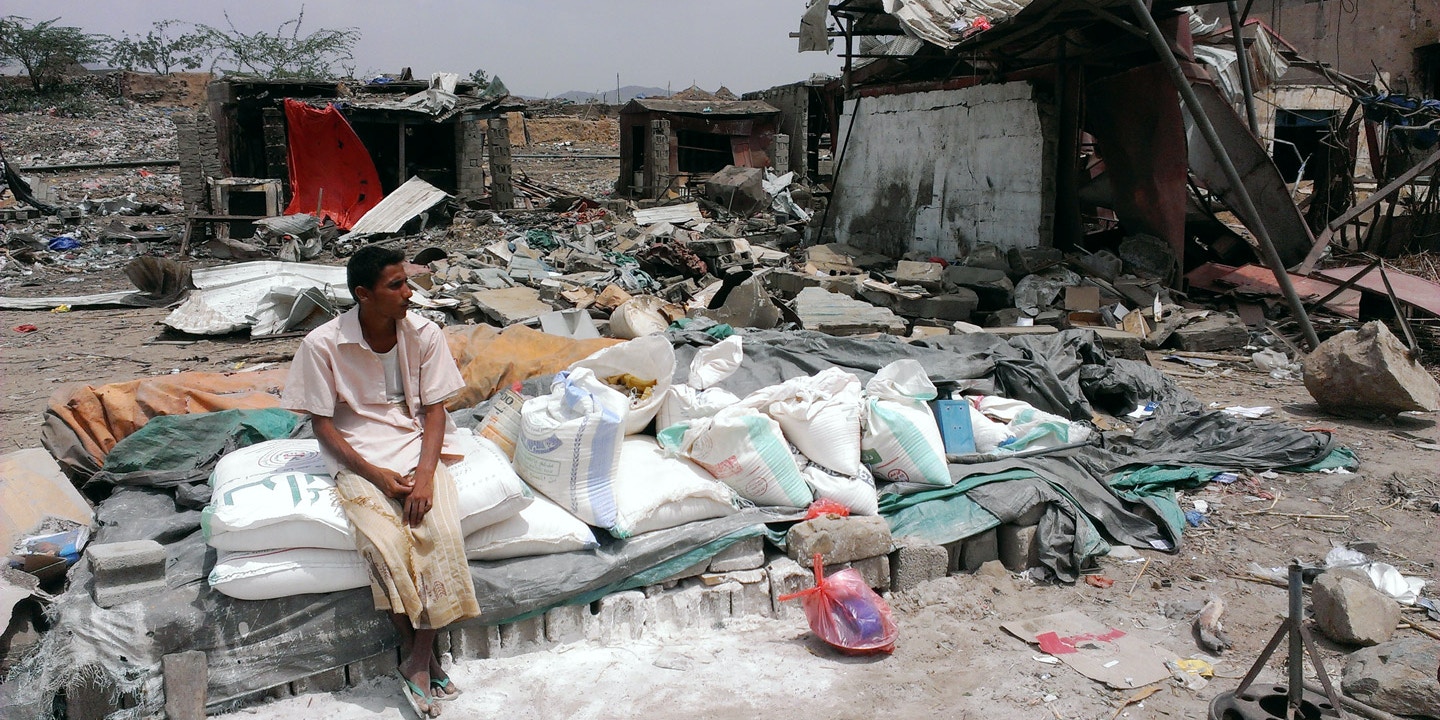 Around midday on March 15, fighter jets from a Saudi-led coalition bombed a market in Mastaba, in Yemen’s northern province of Hajjah. The latest count indicates that about 120 people were killed, including more than 20 children, and 80 were wounded in the strikes — perhaps the deadliest attack yet in a war that has killed more than 6,000 civilians. Local residents and health officials say the carnage was so great in Mastaba that most of the bodies could hardly be identified, and several were beyond recognition.

The Saudi coalition consists of nine Arab states that have joined forces against Houthi rebels who have taken over large parts of Yemen. While U.S. fighter jets are not involved in the bombing campaign, the U.S. is providing intelligence and other forms of assistance, including  weapons sales and aerial refueling of the Arab jets. After the latest attack, a top United Nations official, Zeid Ra’ad Al Hussein, the high commissioner for human rights, said the coalition might be committing war crimes. While the horrific terrorist attacks against civilians in Europe receive extensive media coverage, the U.S.-supported bombings of civilians in Yemen get scant attention.

At the roadside marketplace in Mastaba, journalist Mohammed Ali Kalfood interviewed a number of survivors this weekend. The following is the account of Khaled Hassan Mohammadi, 21, who sold sacks of flour at the market and survived the attack. Mohammadi’s account has been translated and condensed.

WE SAW DEADLY airstrikes on a market last Ramadan, not far from here, but this attack was the deadliest. There was an earlier attempt to bomb this market over two months ago — you can still see the crater over there, where a dud missile is still buried.

But this time, two explosions destroyed the marketplace at noon, when people usually buy their food and khat [a leaf that is a mild stimulant when chewed]. This was the only marketplace in the entire district and had recently become larger, especially after many storekeepers and retailers had to escape from neighboring areas, such as Haradh. People bought a wide range of food in this market; they used to buy and sell livestock, and even bought clothes.

There was a big hangar where khat was sold. Around 12 p.m., the first airstrike hit that hangar. The second hit another hangar soon afterward, where a lot of food was sold. I was in my spot, selling sacks of flour. The market was bustling at the time, with a large number of people. There was a lot of noise coming from the electricity generators and motorcycles, so I heard no warplane. Usually they fly over Mastaba almost every day — you can hear now, this warplane circling overhead.

At noon, when the first explosion took place, I nearly passed out, falling on the ground. The other explosion followed right after the first one. Then, all of a sudden, I found myself jumping to my feet and running ahead. I stopped when I got to the opposite side of the market, only to see bodies scattered all over the place. There were two big craters where the bombs hit — nearly full of ripped and charred bodies, and blood was everywhere. Survivors were in a frenzy; rescuers began to pile up the bodies, while the wounded were rushed to hospitals.

Thank God, I survived unscathed. None of my family members were there at the time. But other families were blown up: Five brothers, who used to help khat sellers to make a living, were all killed in the strikes. When their old father, Hassan Kashoor, came to identify the bodies of his five sons, four of them could hardly be identified, while the other went unidentified. There were too many limbs and other parts of the bodies of those who were killed, so that the families could barely identify their dead.

Sheikh Bakeeli, the local authority in Mastaba, decided that all the unidentified bodies, along with the limbs and other body parts that had been collected, should be buried in one place. They were buried in a communal grave, not far from the marketplace itself.

Top photo: Khaled Hassan Mohammadi sits with his sacks of flour in the aftermath of a Saudi-led bombing in Mastaba, Yemen, in March 2016.