An Israeli soldier was detained after a human rights group published clear video of him shooting a wounded, immobilized Palestinian suspect in the head. 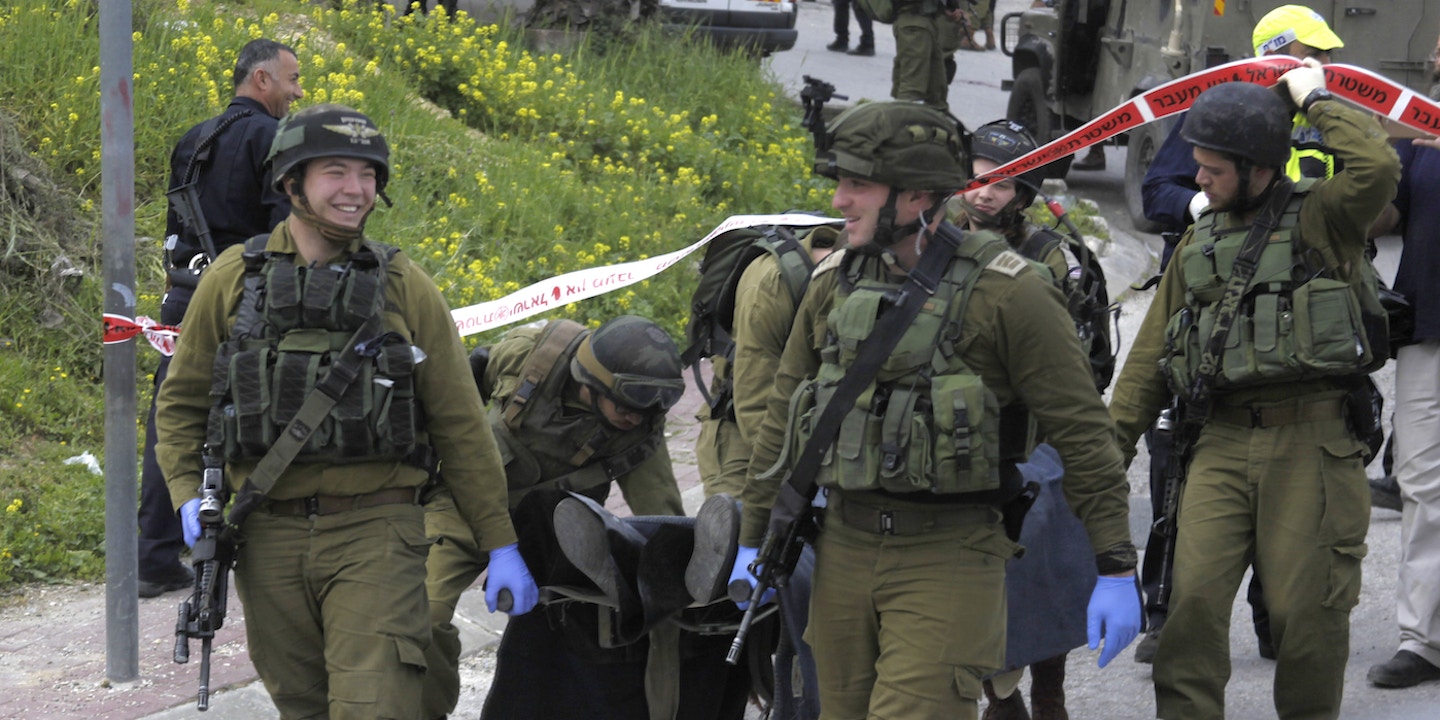 AN ISRAELI SOLDIER was arrested on Thursday after a rights group published clear video images of him shooting a wounded, immobilized Palestinian suspect in the head following a knife attack in the West Bank city of Hebron earlier in the day.

The graphic, distressing video was posted online by B’Tselem, an Israeli group that provides cameras to Palestinians to help them document human rights abuses in the West Bank territory that has been under military rule since Israel first occupied it in 1967.

As the Israeli newspaper Haaretz reports, the video was recorded just after another soldier was stabbed and moderately wounded at a checkpoint in the Tel Rumeida area of Hebron’s Old City, and two Palestinian suspects were killed, including the one who was shot in the video.

According to Ma’an News Agency in Bethlehem, the dead men were identified by the Palestinian health ministry as Ramzi Aziz al-Qasrawi, 21, and Abed al-Fattah Yusri al-Sharif, 21.

In a statement accompanying the video, B’Tselem explains that the video recorded by “Emad abu-Shamsiyah, a Hebron resident, shows al-Sharif lying on the road injured, with none of the soldiers or medics present giving him first aid or paying him any attention at all.”

About 18 seconds into the clip, al-Sharif can be seen clearly moving his head as he lies sprawled on his back. Ninety seconds later, an Israeli soldier cocks his rifle, steps forward, and fires a single shot at the wounded man from point-blank range. Moments later, a clear trail of blood can be seen streaming from the man’s head across the pavement.

Several Palestinian and Israeli observers were struck by the fact that no one around the soldier who fired the shot seemed to treat the incident as unusual — suggesting that such extrajudicial killings of suspected attackers have now become “routine,” as critics have charged.

Absolutely horrifying. People around the executioner simply carry on, as if they didn't just witness a murder https://t.co/kLNjjKK750

Asked to comment on the video evidence, Lt. Col. Peter Lerner, a spokesperson for the Israel Defense Forces, confirmed in an email to The Intercept that the army took it to be genuine. “The IDF views this incident as a grave breach of IDF values, conduct, and standards of military operations,” he wrote. “A Military Police investigation has commenced and the soldier involved has been detained. All of the soldiers involved will be investigated as will the orders given.”

The soldier, who was later identified as a medic — and could be seen at the start of the B’Tselem clip helping the wounded soldier into an ambulance — reportedly admitted killing the prone suspect during his subsequent interrogation by investigators, but claimed that he only did so because he feared that the man might have been about to detonate a bomb.

The soldier’s name was not used in the Israeli media, but his supporters online, calling him a hero, drew attention to what appears to be his Facebook profile. That account, in the name of Cpl. Elor Azaria, includes several photographs that closely match the appearance of the soldier seen in the video, as well as a recent commendation of his service from the army.

The Israeli soldier Elor Azraya who was caught on tape executing a Palestinian attacker will be put on trial pic.twitter.com/TaYfMyTpTh

Elizabeth Tsurkov, a rights activist outside Tel Aviv, pointed out that the soldier’s Facebook activity included liking the accounts of The Shadow — a rapper who organized groups who beat up anti-war protesters during Israel’s 2014 Gaza offensive — and three far-right politicians: Baruch Marzel, Avigdor Lieberman, and the current justice minister, Ayelet Shaked.

“Marzel gives out free pizzas to soldiers who kill attackers on the scene,” Tsurkov told The Intercept in an interview. His slogan, “eliminate a terrorist, get a pizza,” rhymes in Hebrew, she explained.

The medic’s supporters also pointed to video clips recorded earlier in the incident that appeared to show al-Sharif was able to move slightly. One clip, published by Israel’s Ynet News, showed the wounded man rolling over from his side onto his back, under the close watch of a soldier.

That video, however, also appeared to show that none of the other soldiers standing near the wounded suspect at that stage seemed at all concerned that he might be wearing an explosive vest.

In another clip posted online Friday, one of the soldiers milling around just before the shooting could be heard saying, “He might be booby-trapped. Be careful not to touch him until the sappers arrive.” Still, the B’Tselem video clearly shows that more than a dozen soldiers, medical workers, and armed settlers walked casually past the wounded suspect in the minute before the shooting.

After al-Sharif was killed, settlers, police officers, and soldiers, including the medic who fired the shot, remained within close proximity of the body, talking and checking their phones. 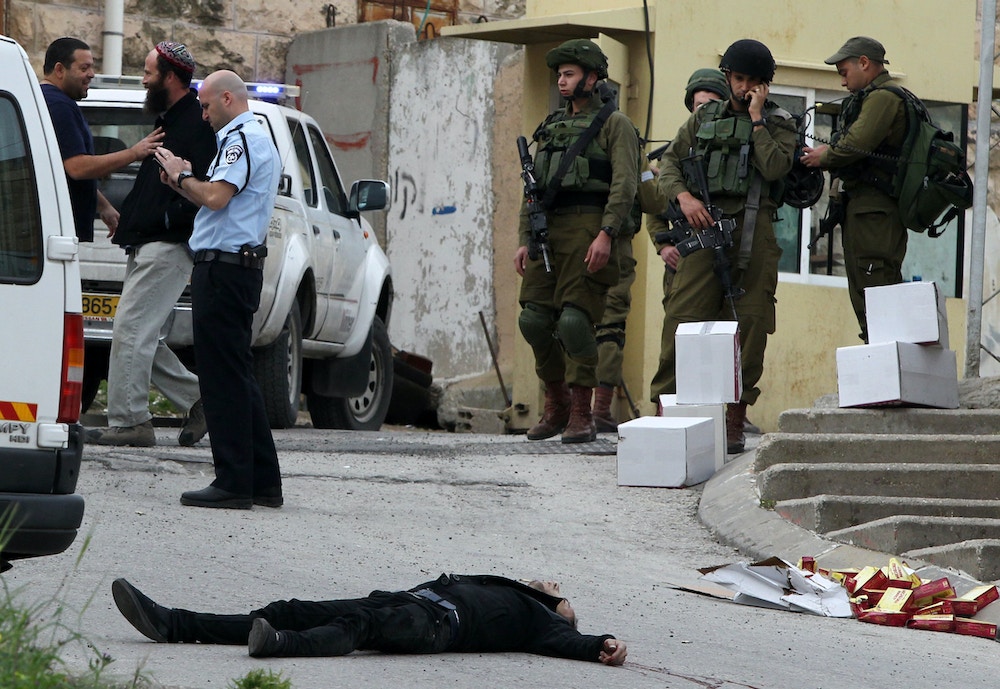 Israeli soldiers, including a combat medic now under investigation for murder, stood near the body of a Palestinian suspect that one of them shot in the head on Thursday in Hebron.

Similarly graphic still images and a second video posted online suggested that the other suspect, al-Qasrawi, was also shot in the head.

Ayman Odeh, the leader of the Joint List of predominantly Arab parties in Israel’s parliament, wrote on Twitter: “Israel has turned in recent months into a place in which executions are carried out in public with the encouragement of cheering mobs.”

B’Tselem, which has repeatedly raised the alarm about the shooting of wounded suspects, said the authorities were to blame for excusing previous incidents that were less clearly documented. “Extrajudicial street killings are the direct consequence of inflammatory remarks made by Israeli ministers and officials, augmented by the general public atmosphere of dehumanization,” the group wrote.

The rights group, and another called Breaking the Silence, which documents the excessive use of force by Israel’s military in the occupied territories, has been heavily criticized in recent months by officials and Israeli nationalists for supposedly undermining the state by pointing out abuses.

In the aftermath of Thursday’s incident, the Haaretz correspondent Barak Ravid observed that this unfiltered view of what goes on in areas of the West Bank controlled by Israel’s military made it quite clear why such rights groups were needed.

"Anybody who wonders why we still need Breaking the Silence (shovrim shtika)
should just watch this video" #Hebron https://t.co/lGNWlYBhIx

As another Israeli journalist, Mairav Zonszein, noted, before video of the shooting came to light on Thursday, prominent settlers in Hebron were photographed mocking activists from Breaking the Silence by dressing like them for the Jewish holiday of Purim.

Israeli soldiers are in Hebron in large numbers to protect several hundred Jewish settlers who live in the center of the city of nearly 200,000 Palestinians. Last week, the Israeli columnist Gideon Levy suggested that American legislators who support Israel’s occupation of the West Bank should visit the city to see the appalling circumstances imposed on its Palestinian majority. “I’ve never met an honest human being who went to Hebron and didn’t come back shocked,” he said.

Top photo: Israeli soldiers carried the body of one of two Palestinians shot dead after a stabbing attack in the West Bank city of Hebron on Thursday.