No American has been more associated with Navy SEAL mystique than Chris Kyle. But the American Sniper author misrepresented how many decorations he had collected, according to internal Navy documents. 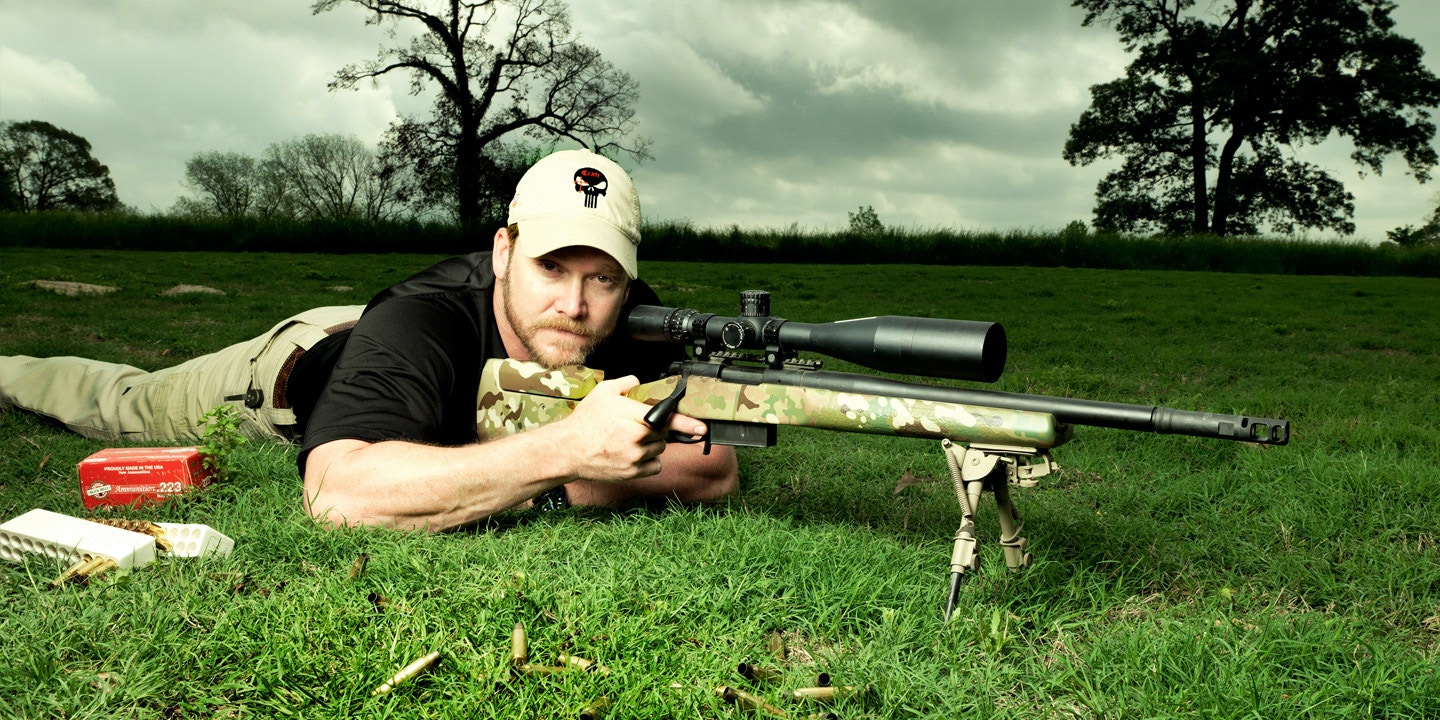 No American has been more associated with the Navy SEAL mystique than Chris Kyle, known as the deadliest sniper in U.S. military history. His bestselling autobiography, American Sniper — a story of honor, glory, and quiet heroism — has sold more than a million copies. The movie adaptation became the highest-grossing war film in American history.

“All told,” Kyle wrote in his book, “I would end my career as a SEAL with two Silver Stars and five Bronze [Stars], all for valor.”

But Kyle, who was murdered by a fellow military veteran several years after leaving the Navy, embellished his military record, according to internal Navy documents obtained by The Intercept. During his 10 years of military service and four deployments, Kyle earned one Silver Star and three Bronze Stars with Valor, a record confirmed by Navy officials.

Kyle was warned at least once before American Sniper was published that its description of his medal count was wrong, according to one current Navy officer, who asked not to be identified because he was not authorized to speak about the case. As Kyle’s American Sniper manuscript was distributed among SEALs, one of his former commanders, who was still on active duty, advised Kyle that his claim of having two Silver Stars was false, and he should correct it before his book was published.

Current and former Navy SEALs interviewed for this article, who agreed to speak on background because they feared being shunned by their close-knit community, did not dispute Kyle’s heroism in combat, but saw the inflation of his medal count as significant because they consider battlefield embellishments to be dishonorable.

The Silver Star, the third-highest award given for battlefield conduct, is considered a prestigious commendation.

The discrepancy raises new questions about Kyle’s credibility and highlights a continuing controversy in the SEAL community over members exaggerating or distorting their war records. In one high-profile controversy, two members of SEAL Team 6 engaged in a public dispute over who deserved credit for the fatal shots that killed Osama bin Laden.

Within the military community, embellishing medals and achievements — so-called stolen valor — is considered a serious ethical violation. In 1996, Adm. Jeremy Boorda, who was then the highest-ranking uniformed naval officer, committed suicide after questions were raised about two valor pins — known as “devices” — he wore on his uniform for service during the Vietnam War. It was later determined that he was not authorized to wear the “V” devices.

According to two current Navy officials, inaccurate information about Kyle’s awards is also contained in his separation document, known in the military as a DD214, which usually reflects a veteran’s official service record. Kyle’s DD214 form, which lists two Silver Stars and six Bronze Stars with Valor among his decorations, also differs from the number of Bronze Stars with Valor — five — that Kyle listed in his book. Bronze Star and Silver Star on display at an awards ceremony on March 12, 2012.

The Navy provided records for one Silver Star and three Bronze Stars with Valor after The Intercept requested all documentation related to Kyle’s medals. The Navy Department Awards System maintains records of the official awards. Navy officials could not say why Kyle’s separation papers contained inaccurate information about his medals, but one official described Kyle as a “decorated war hero” and questioned the “motivations” of looking into Kyle’s account.

“The Navy considers the individual service member’s official military personnel file and our central official awards records to be the authoritative sources for verifying entitlement to decorations and awards,” said Cullen James, a spokesperson for the Navy Personnel Command, in a statement emailed to The Intercept. “The form DD214 is generated locally at the command where the service member is separated. Although the information on the DD214 should match the official records, the process involves people and inevitably some errors may occur.”

Normally, the personnel clerk handling a sailor’s separation is required to ensure that the awards match the service member’s official personnel file. It is unclear whether that was done in the case of Kyle’s DD214.

“Given [Kyle’s] celebrity, you’d think the Navy would have gone back and fixed the discrepancy,” said one Navy official, who was not authorized to speak on the record. “But he’s only got the three Bronze and one Silver Star.”

Kyle separated from the Navy in 2009 after almost 11 years as a SEAL. In 2013, he was murdered in Texas by a fellow veteran struggling with mental health problems.

Since the publication of American Sniper, Kyle’s exploits in Iraq during the height of the war have taken on almost mythic proportions and many of his fellow soldiers regard his actions during his four deployments in Iraq as heroic. During the November 2004 American siege of Fallujah, for example, Kyle saved an injured Marine’s life by dragging him to safety while taking and returning fire down an alleyway.

Kyle also wrote in his book that he had 160 “confirmed kills” as a sniper. Service members in battle largely self-report the number of enemy combatants they kill.

“SEALs are silent warriors, and I’m a SEAL down to my soul,” Kyle wrote in American Sniper. “If you want to check me out, ask a SEAL.”

Two members of the SEAL community said that while Kyle’s actions under fire were commendable, he tarnished his accomplishments through misrepresentation.

“It takes away from the legitimate heroism he showed,” said a retired SEAL who was deployed to Iraq when Kyle was also deployed there.

The 2004 incident resulted in a Bronze Star with Valor, one of three that Kyle was awarded. That action was recommended by his commanding officers for a Silver Star, but it was denied by the secretary of the Navy at the time. Kyle was aware that the Silver Star was denied, according to his autobiography, and did not count it among the two Silver Stars he claimed to receive. He did not say in the book what either of those Silver Stars were for.

Retired Army Lt. Col. Robert Bateman, a military historian, said that public reports of stolen valor became more common in the decade after the Vietnam War. Bateman also said it was inexcusable that Kyle, or any other veteran, would inflate his record, even if the veteran, like Kyle, had demonstrated clear heroism during his service.

Résumé inflation may be less of a scandal for civilians, Bateman said, but for those in the military “some elements are paid in blood.”

A retired SEAL officer said several of Kyle’s commanding officers were aware that he had misrepresented how many decorations he had collected. The retired officer attended the ceremony for Kyle’s single Silver Star, which was awarded to him for a 2006 deployment in Ramadi, Iraq. “During 32 sniper overwatch missions,” the citation reads, “he personally accounted for 91 confirmed enemy fighters killed.”

When asked if he had been aware of Kyle’s inaccurate accounting of his awards, Jocko Willink, one of Kyle’s former commanding officers, said, “Chris Kyle, like many of the SEALs, soldiers, and Marines I had the honor to serve with, deserve much more than whatever ribbons and medals they received.”

Another former commanding officer, Leif Babin, declined to comment. Willink and Babin co-authored a book, Extreme Ownership, which details their time commanding SEALs in Iraq. It includes a section about Kyle’s prowess as a sniper, but does not tally his medals.

This is not the first time that Kyle has been accused of misrepresentation. In 2014, just over a year after Kyle’s death, a Minnesota jury found that he had lied in American Sniper and defamed former Minnesota Gov. Jesse Ventura by claiming to have punched Ventura out at a bar in Coronado, California. The jury awarded Ventura, who served in a precursor unit to the Navy SEALs during the Vietnam War, $1.8 million in damages and ordered Kyle’s widow, Taya Kyle, to pay. (Taya Kyle is appealing the ruling.)

When contacted by The Intercept, Taya Kyle, through a representative, declined to comment about her husband’s service record.

The former SEAL officer who attended Kyle’s Silver Star ceremony said it was a poorly kept secret in the naval special operations community that Kyle embellished his record. “The SEAL leadership was aware of the embellishment, but didn’t want to correct the record because Kyle’s celebrity status reflected well on the command.”

“Everybody went on a pilgrimage to his funeral at Cowboys Stadium,” the ex-SEAL said, “knowing full well his claims weren’t true.”