“Liberal reformist politics in a nutshell,” tweeted one observer. ” ‘Black liberation brought to you by orgs that prey upon Black folk.'” 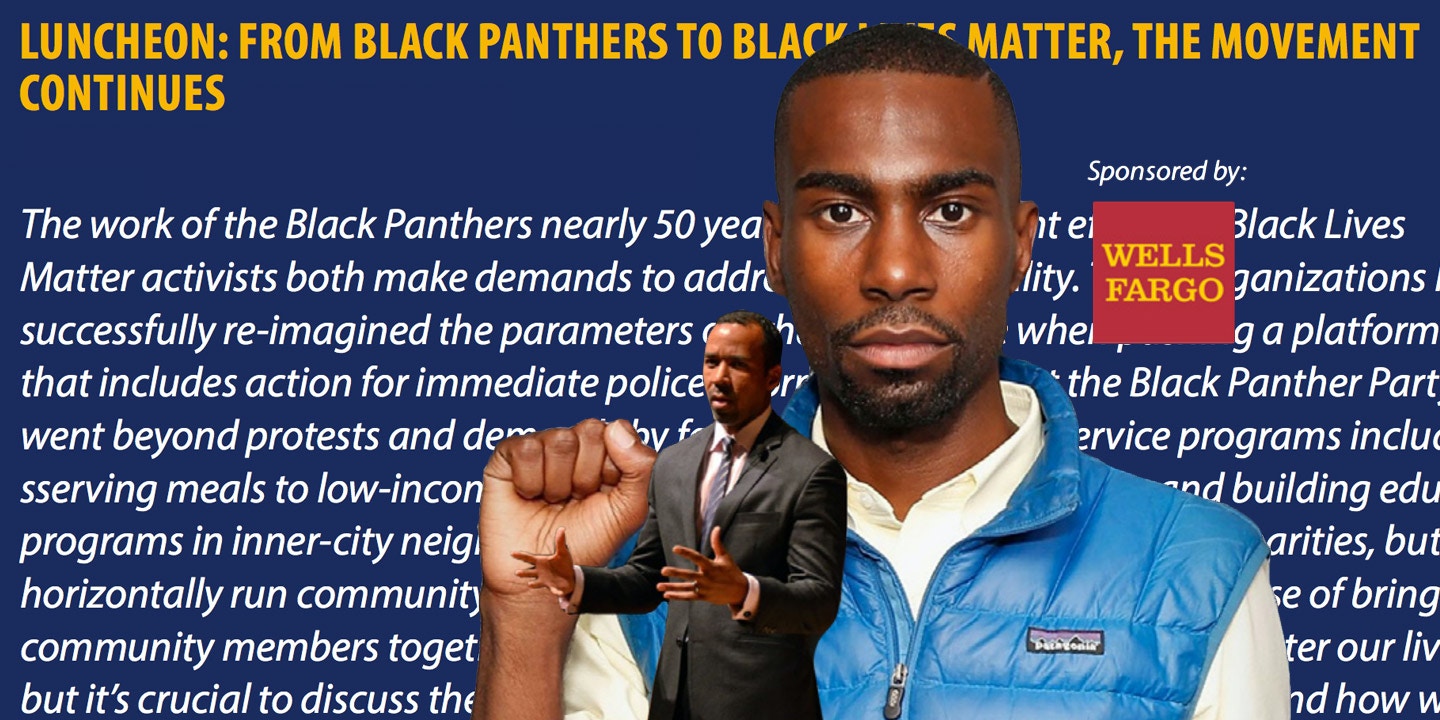 Wells Fargo’s sordid practice of steering minorities into exploitative mortgages burst into public view after the housing crash in 2008. But to a black business group the bank has partnered with — by donating nearly half a million dollars — it’s ancient history.

The U.S. Black Chambers (USBC), an organization dedicated to growing black business, has been collaborating on programs with Wells Fargo since 2014.

But a Wells Fargo-sponsored USBC luncheon held last week was a bridge too far for some observers. 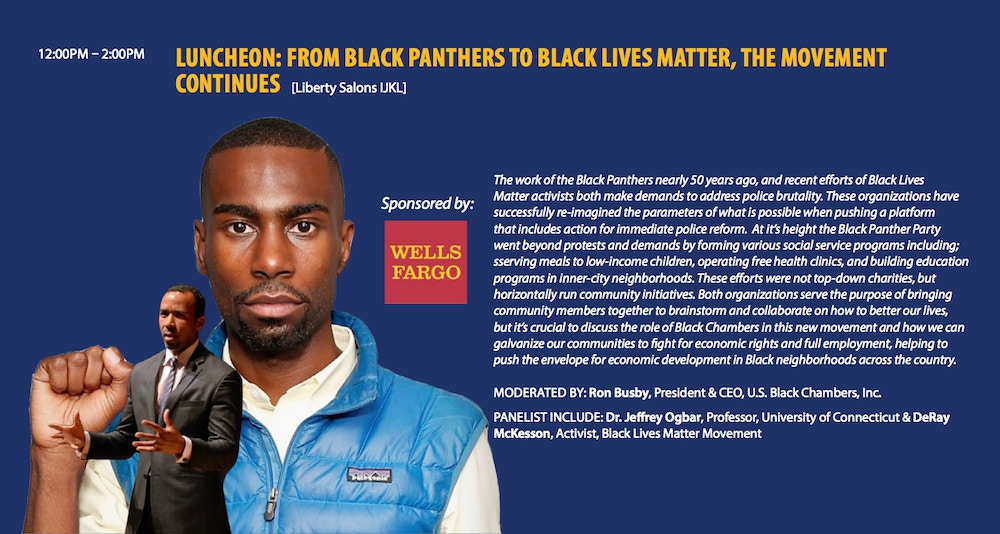 The lunch discussion was titled: “From Black Panthers to Black Lives Matter, the Movement Continues.” One panelist was DeRay Mckesson, a former candidate for mayor in Baltimore and a high-profile Black Lives Matter activist. The Wells Fargo branding was prominent.

The event drew scorn from people incensed that black activism would be linked with Wells Fargo. Dwayne David Paul, a minister at St. Peter’s University in New Jersey, tweeted: “Liberal reformist politics in a nutshell. ‘Black liberation brought to you by orgs that prey upon Black folk.'”

Indiana-based writer Fredrik DeBoer drew attention to the event in a post on Facebook, writing, “this is why I drink.”

Mckesson, who spoke on the panel with Ron Busby, the president and CEO of U.S. Black Chambers, tweeted in response: “I didn’t make/approve this graphic & Wells Fargo didn’t sponsor/pay me. You want a conspiracy here & there is none.”

But the event’s organizers made no such effort to distance themselves from Wells Fargo. In interviews with The Intercept, two board members for the U.S. Black Chambers offered Wells Fargo, without prompting, as an example of a beneficial corporate partner.

And asked about the bank’s accusations of discriminatory lending, USBC board chairman Aubry Stone defended Wells Fargo. “Obviously, they’re trying to do the right thing,” he said. “There were a lot of people caught up in that scenario, some on purpose, some by accident.”

Wells Fargo has donated to USBC since at least 1999. Its donations have been used to give grants to black chambers of commerce, including the Heartland Black Chamber of Commerce in Kansas City, KS, and the Fresno Metro Black Chamber of Commerce in Fresno, CA. Funding has also been used to create webinars on getting loans and to support the Black Male Entrepreneur Institute.

Stone is also president and CEO of the California Black Chamber of Commerce in Sacramento, CA, another group that receives funding from Wells Fargo.

To Stone, the bank is not entirely responsible for the predatory loans made to minority customers: “See, one of the things that is really important to understand and get the slant is that, when someone buys another company, you buy their liability and a lot of that happened in that period, so they inherited a lot of bad paper,” he said. Stone was referring to Wells Fargo’s merger with Northwest Corporation in 1998 and its acquisition of Wachovia in 2008. “So it wasn’t necessarily them doing it. They inherited a lot of bad paper.”

But it was Wells Fargo itself, not any of the banks it merged with, that came under fire in Baltimore, for instance, for targeting black communities, and referring to subprime lending as “ghetto loans” and to blacks as “mud people” — not Wachovia or Northwest.

Wells Fargo has paid millions of dollars in settlements over its practices that contributed to the U.S. housing crisis. Notably, in a 2012 Justice Department settlement, the bank agreed to pay $184 million in relief to borrowers the government alleged “were steered into subprime mortgages or who paid higher fees and rates than white borrowers because of their race or national origin.”

The Justice Department’s investigation found 34,000 cases where black and Hispanic customers were charged with higher fees and rates on mortgages than white customers with similar economic statuses, according to Reuters.

For Antwanye Ford, a U.S. Black Chambers board member and owner of a Washington, D.C.-based technology consulting firm, the partnership helps the organization make sure Wells Fargo keeps giving loans to black businesses. He said Well Fargo provides the organizations with statistics about how many black business owners are getting loans.

Kerwin Brown, another board member, said he does not recall seeing such statistics. Brown is the chairman of the board at the Black Chamber of Arizona, another organization that takes donations from Wells Fargo. He said that Wells Fargo’s discriminatory lending is not something he’s thought about recently. He also said he cannot remember the issue ever coming up at a board meeting. “We obviously have a very good relationship with our corporate sponsors,” he said.

“It’s interesting,” Ford said, “because we try to hold them accountable by saying, ‘We understand you’ve given us funding, but we want to see lending to black-owned businesses going out.’ I think for us, it’s important for them to talk about all of the lending. Have they been increasing lending? So they’ll let us know: ‘Hey, we’ve given this many businesses loans’ and we want to hear the statistics and they’ve been providing that to the board.”

Ford added: “We understand they’re getting better, but I think we want to hold them accountable for that.”

Wells Fargo has given $314,000 to USBC in the two years since the organizations became partners, according to a Wells Fargo spokesperson. That’s a big chunk of USBC’s annual budget, which was $1.3 million in 2014, according to filings with the IRS.

On the same day as USBC’s Black Lives Matter luncheon, Wells Fargo announced it was donating another $180,000 to the organization. A National Association for the Advancement of Colored People’s (NAACP) Twitter account praised the bank, posting: “thrilled to see our partners going further together!”

The NAACP filed lawsuits in 2007 against Wells Fargo and other banks accusing them of violating the Fair Housing and Equal Credit Opportunity Acts, as well as racial discrimination, but the organization dropped its claims against Wells Fargo in 2010. The next year, the two groups opened a financial literacy center together in Washington, D.C.