Two eyewitnesses say a second wounded Palestinian suspect was executed in a March incident, but there was no video of the second killing. 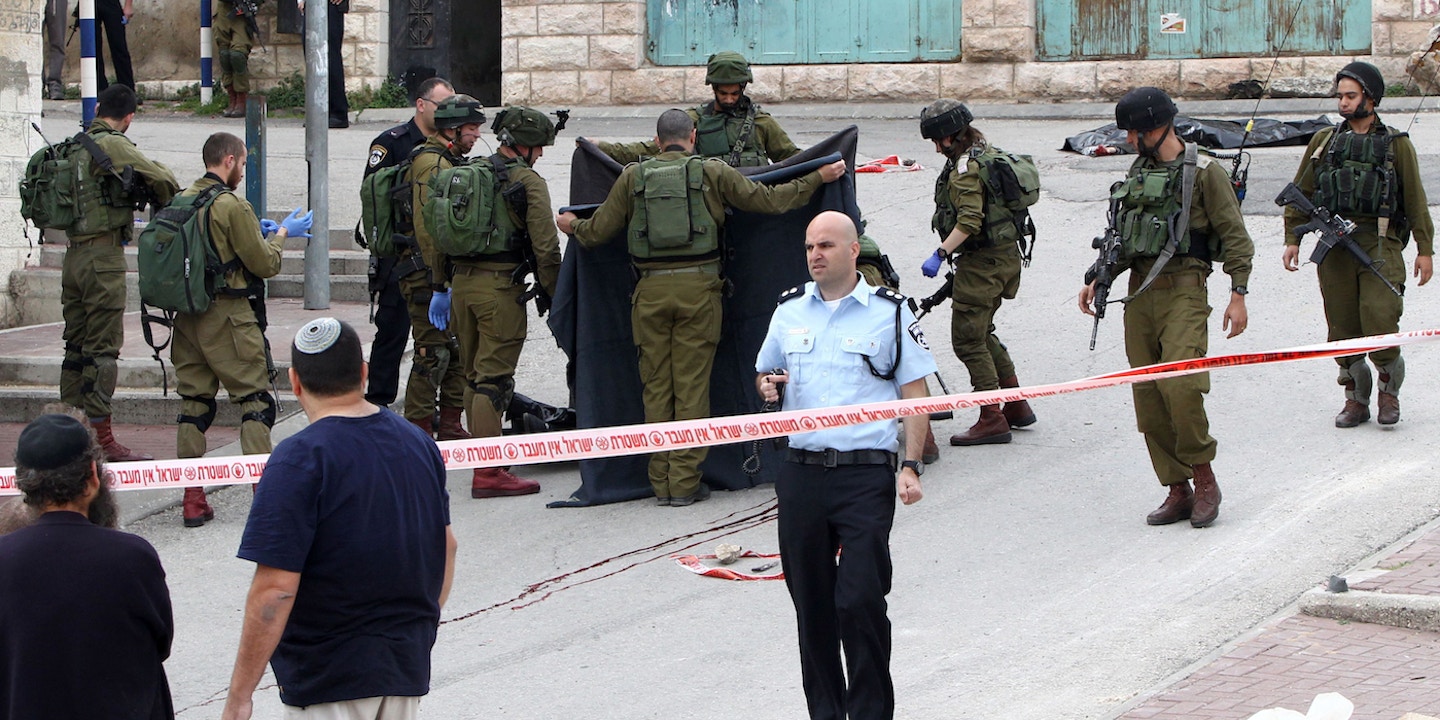 The on-camera execution of a wounded Palestinian suspect by an Israeli soldier in the occupied West Bank city of Hebron in March — which led to an indictment of the soldier for manslaughter and exposed a rift between Israel’s military leaders and many civilians — was preceded by another extrajudicial killing not captured on video by witnesses, an Israeli rights group reported on Monday.

That video, recorded by Emad Abu Shamsiya, a Hebron resident who lives next to the military checkpoint where the soldier was stabbed, began with images of Sharif lying on the pavement flat on his back after being shot during the attack. Just before Azaria cocked his rifle and fired a single, fatal shot into Sharif’s head, the body of a second suspected attacker, Ramzi al-Qasrawi, could be seen nearby, with a pool of blood around his head.

B’Tselem revealed on Monday that another two witnesses, Amani Abu Aisha and Nour Abu Aisha, who each captured some of the incident on video from rooftops nearby, said in recent interviews that before they could press record, Qasrawi had also been shot in the head from close range by an Israeli soldier after he had already been immobilized.

Amani Abu Aisha’s footage, which was recorded first, includes an audible gasp as an Israeli soldier can be seen using his foot to roll Qasrawi’s lifeless body onto his back, revealing a large blood stain on the ground around his head.

The subsequent images recorded moments later by Nur Abu Aisha, from a building closer to Qasrawi’s body, show the wounded Israeli soldier walking to a stretcher, under Azaria’s care, and that Sharif was clearly not considered a threat by either the soldiers or armed settlers casually walking up to him and recording the scene on their phones.

Sarit Michaeli, a B’Tselem spokesperson, explained that the testimony from the two witnesses was gathered in person by a field worker for the rights group only recently because the neighborhood of Tal Rumeida, where the shootings took place, was closed to non-residents in October and only opened recently. (A military checkpoint blocked access to the area two weeks ago when I visited Hebron.)

Michaeli pointed out that the two witnesses, who are both B’Tselem volunteers, had shared their footage of the incident online in March, and had spoken on Palestinian television, but their accounts were apparently ignored by the Israeli press and military investigators. Speaking to The Intercept by phone from Tel Aviv, Michaeli added that both witnesses were made aware of the fact that the Israeli military almost certainly has its own footage of the entire incident from security cameras mounted around the checkpoint, which could either corroborate or disprove their accounts. Both witnesses stood by their testimony and said they were prepared to testify in court if called on to do so.

The Israel Defense Forces told the Jerusalem Post that the witness accounts “do not match the findings of our operational investigation and contradict the information the IDF has on the incident.”

Michaeli called for the Israeli authorities to resolve the matter by simply publishing all of the security camera footage it has of the incident.

Azaria’s lawyer, who had initially argued that the manslaughter charges against his client should be dropped because other soldiers had killed Palestinian suspects in similar circumstances, said the new eyewitness accounts could “signal concealment of information by the prosecution.”

If the testimony is accurate, the disparity between the attention paid to the execution captured on camera and the one that was not photographed is a stark reminder of how important video evidence has become to the public debate, or lack of it, over the lives and deaths of Palestinians under the Israeli occupation, which entered its 50th year this week.

Emad Abu Shamsiya, who recorded the footage of Sharif’s execution, is scheduled to testify this week at a military court in Jaffa in the trial of the medic.

Thousands of Israeli soldiers are deployed in the center of Hebron to protect a few hundred Jewish settlers who live among nearly 200,000 Palestinians. As the Israeli newspaper Haaretz reported in April, more of the incident can be seen in video recorded by two Jewish settlers.

Last week, military prosecutors revealed that a video clip of the aftermath of the shootings recorded by one of those settlers, Ofer Ohana — a volunteer ambulance driver who recorded himself referring to the bodies of the two Palestinians killed in the incident as “the trash” — appeared to show that he had kicked a knife closer to the body of Sharif after he was killed, presumably to make the scene more incriminating.

Comparing the part of Nour Abu Aisha’s footage at the 18-second mark with the last six seconds of a graphic clip shot a short time later by one of the settlers appears to show that the knife by Qasrawi’s body was also moved closer to him on the pavement at some stage after he was killed.