Gen. Philip Breedlove plotted in private to overcome Obama’s reluctance to escalate military tensions with Russia over the war in Ukraine in 2014, according to apparently hacked emails. 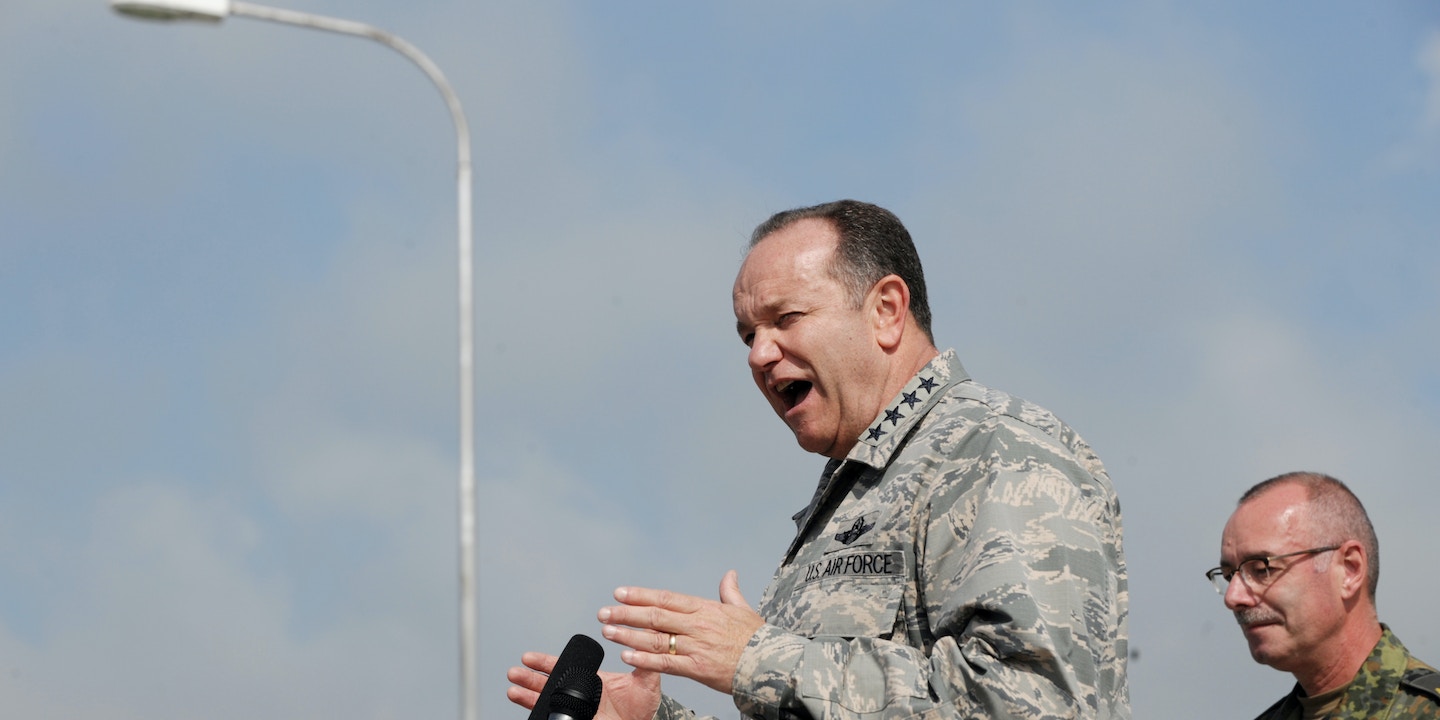 Retired U.S. Air Force Gen. Philip Breedlove, until recently the supreme commander of NATO forces in Europe, plotted in private to overcome President Barack Obama’s reluctance to escalate military tensions with Russia over the war in Ukraine in 2014, according to apparently hacked emails from Breedlove’s Gmail account that were posted on a new website called DC Leaks.

Obama defied political pressure from hawks in Congress and the military to provide lethal assistance to the Ukrainian government, fearing that doing so would increase the bloodshed and provide Russian President Vladimir Putin with the justification for deeper incursions into the country.

Breedlove, during briefings to Congress, notably contradicted the Obama administration regarding the situation in Ukraine, leading to news stories about conflict between the general and Obama.

But the leaked emails provide an even more dramatic picture of the intense back-channel lobbying for the Obama administration to begin a proxy war with Russia in Ukraine.

In a series of messages in 2014, Breedlove sought meetings with former Secretary of State Colin Powell, asking for advice on how to pressure the Obama administration to take a more aggressive posture toward Russia.

“I may be wrong, … but I do not see this WH really ‘engaged’ by working with Europe/NATO. Frankly I think we are a ‘worry,’ … ie a threat to get the nation drug into a conflict,” Breedlove wrote in an email to Powell, who responded by accepting an invitation to meet and discuss the dilemma. “I seek your counsel on two fronts,” Breedlove continued, “how to frame this opportunity in a time where all eyes are on ISIL all the time, … and two, … how to work this personally with the POTUS.”

“I think POTUS sees us as a threat that must be minimized, … ie do not get me into a war????” Breedlove wrote in an email to Harlan Ullman, senior adviser to the Atlantic Council, describing his ongoing attempt to get Powell to help him influence Obama.

“Given Obama’s instruction to you not to start a war, this may be a tough sell,” Ullman replied a few months later, in another string of emails about Breedlove’s effort to “leverage, cajole, convince or coerce the U.S. to react” to Russia.

Breedlove did not respond to a request for comment. He stepped down from his NATO leadership position in May and retired from service on Friday, July 1. Breedlove was a four-star Air Force general and served as the 17th Supreme Allied Commander of NATO forces in Europe starting on May 10, 2013.

Phillip Karber, an academic who corresponded regularly with Breedlove — providing him with advice and intelligence on the Ukrainian crisis —  verified the authenticity of several of the emails in the leaked cache. He also told The Intercept that Breedlove confirmed to him that the general’s Gmail account was hacked and that the incident had been reported to the government.

“The last conversation I had about it with General Breedlove, he said, ‘Yeah, I’ve been hacked several times,’” said Karber. He added that he noticed at least one of his personal emails appearing online from the leak before we had contacted him. “I turned this over to the U.S. government and asked them to investigate. No one has given me any answer.”

“I have no idea whose account was leaked or hacked,” said Powell, when reached for comment about the emails. Powell said he had no comment about the discussions regarding Obama’s response to the conflict in Ukraine.

In the European press, Breedlove has been portrayed as a hawkish figure known for leaning on allied nations to ditch diplomacy and to adopt a more confrontational role again Russian-backed separatists in Ukraine. Breedlove, testifying before Congress earlier in February of this year, called Russia “a long-term existential threat to the United States and to our European allies.”

Der Spiegel reported that Breedlove “stunned” German leaders with a surprise announcement in 2015 claiming that pro-Russian separatists had “upped the ante” in eastern Ukraine with “well over a thousand combat vehicles, Russian combat forces, some of the most sophisticated air defense, battalions of artillery” sent to Donbass, a center of the conflict.

Breedlove’s numbers were “significantly higher” than the figures known to NATO intelligence agencies and seemed exaggerated to German officials. The announcement appeared to be a provocation designed to disrupt mediation efforts led by Chancellor Angela Merkel.

In previous instances, German officials believed Breedlove overestimated Russian forces along the border with Ukraine by as many as 20,000 troops and found that the general had falsely claimed that several Russian military assets near the Ukrainian border were part of a special build-up in preparation for a large-scale invasion of the country. In fact, much of the Russian military equipment identified by Breedlove, the Germans said, had been stored there well before the revolution in Ukraine.

The emails, however, depict a desperate search by Breedlove to build his case for escalating the conflict, contacting colleagues and friends for intelligence to illustrate the Russian threat. Karber, who visited Ukrainian politicians and officials in Kiev on several occasions, sent frequent messages to Breedlove — “per your request,” he noted — regarding information he had received about separatist military forces and Russian troop movements. In several updates, Breedlove received military data sourced from Twitter and social media.

Karber, the president of the Potomac Foundation, became the center of a related scandal last year when it was discovered that he had facilitated a meeting during which images of purported Russian forces in Ukraine were distributed to the office of Sen. James Inhofe, R-Okla., and were published by a neoconservative blog. The pictures turned out to be a deception; one supposed picture of Russian tanks in Ukraine was, in fact, an old photograph of Russian tanks in Ossetia during the war with Georgia.

Breedlove stayed in close contact with Karber and other officials who shared his views on the Ukrainian conflict.

“Phil, can’t we get a statement to counteract the Russians on use of force? what can I do to help? If the Ukrainians lose control of the narrative, the Russians will see it as an open door,” wrote retired Gen. Wesley Clark, who forwarded on his messages with Victoria Nuland, the assistant secretary of state for European and Eurasian affairs. He also passed along concerns from the Bulgarian president that Bulgaria might be Russia’s next target.

In other messages, Clark relayed specific requests for the types of military aid desired by Ukrainian officials. In addition to radar systems and other forms of military equipment, Clark recommended that Breedlove “encourage Ukraine to hire some first rate pr firms and crisis communications firms in U.S. and Europe.” He added, “They need the right tools to engage in information warfare.”

Ukraine did hire several D.C. lobbying and communication firms to influence policymakers. In June 2015, the government signed a deal with APCO Worldwide, an influential firm with ties to senior Democratic and Republican officials.

In an email in February 2015, Karber told Breedlove that “Pakistan has, under the table, offered Ukraine 500 TOW-II launchers (man-portable version) and 8,000 TOW-II missiles,” adding that deliveries of the anti-tank weapons could begin by the end of the month. “However,” Karber wrote, “Pakistan will not make these deliveries without U.S. approval; moreover they will not even request that approval unless they have informal assurance that it would be approved.”

Breedlove was most recently in the news explaining that he now thinks we need to talk to the Russian government to resolve the conflict in Ukraine. “I think we need to begin to have meaningful dialogue,” he said last week, while reiterating his views on the need for a strong NATO to militarily match Russia. “Russia does understand power, and strength, and unity,” he said.

The emails were released by D.C. Leaks, a database run by self-described “hacktivists” who are collecting the communications of elite stakeholders such as political parties, major politicians, political campaigns, and the military. The website currently has documents revealing some internal communications of the Hillary Clinton presidential campaign and George Soros’s Open Society Foundation, among others.