America’s wars take place far away — Kabul is 6,700 miles from New York or, traveling in the other direction, 7,400 miles from San Francisco. They also involve fewer and fewer Americans — the Army now has about 475,000 active-duty soldiers, the lowest number since World War II.

This leaves the Pentagon free to promote itself to a country that largely has no idea what war actually entails. In addition to standard TV advertising and flyovers at the Super Bowl, the U.S. military spends tens of millions of dollars each year on live events that function half as recruitment pitches and half as visceral plugs for its spectacular high-tech weaponry.

Photojournalist Nina Berman has spent 10 years traveling to Fleet Weeks and air shows to document the peculiar collision between the Pentagon’s idealized self-image and the people who pay for it but have little comprehension of what they’re truly buying. 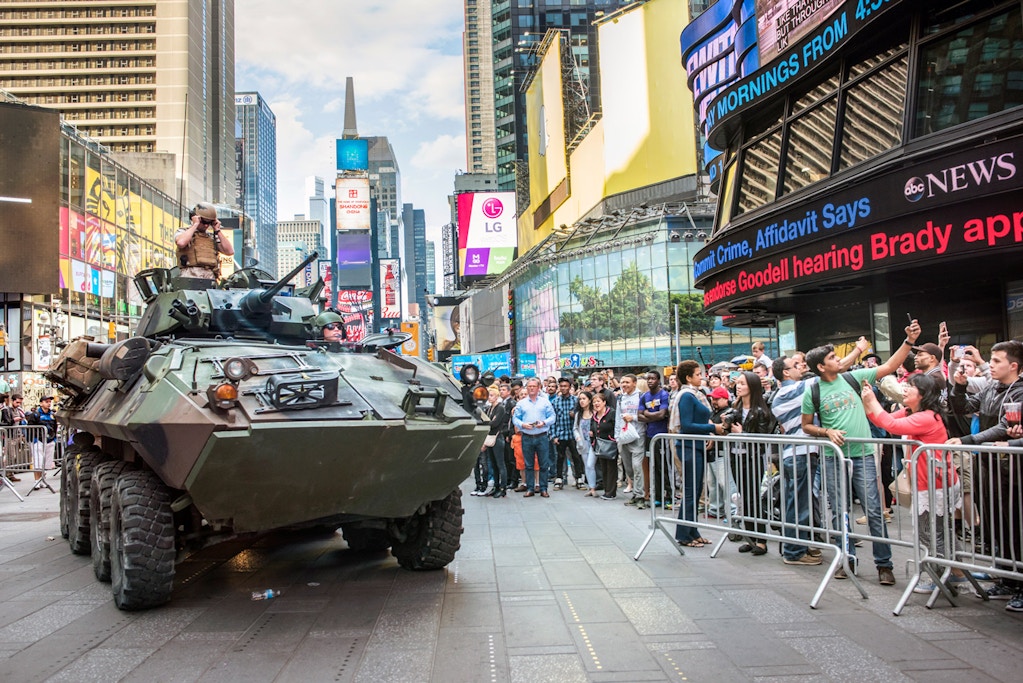 U.S. Marines arrive on a light armored vehicle in New York City’s Times Square during Fleet Week in 2015. In the background is an ad for Shandong, China, where U.S. Marines landed at the end of World War II to intervene on the side of Chiang Kai-shek’s Kuomintang in China’s civil war. 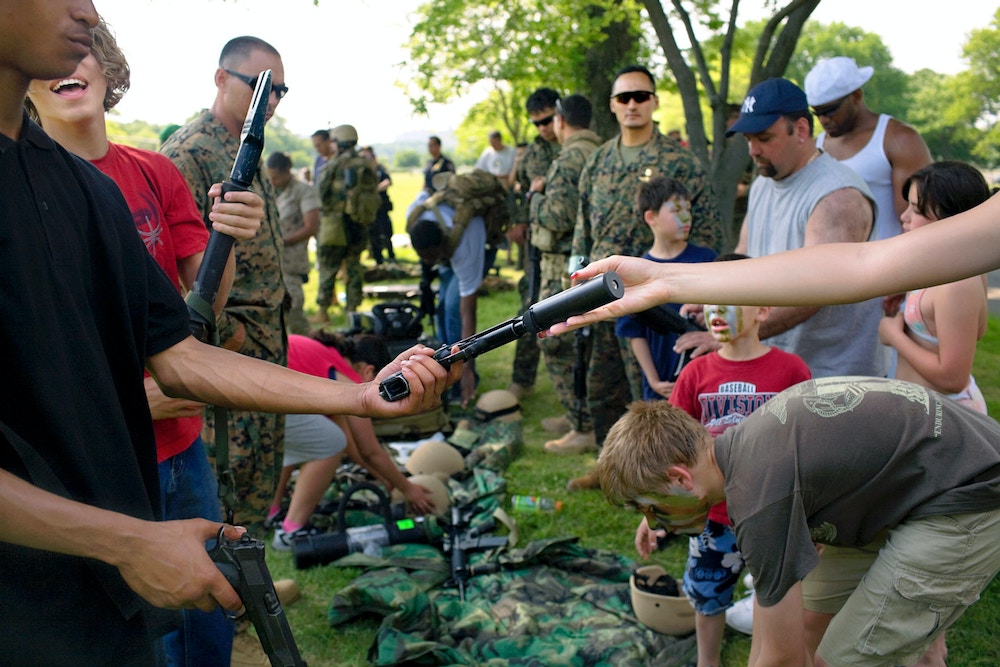 Civilians handle a pistol with a silencer during Fleet Week at Orchard Beach in the Bronx in 2007. Some of the young men had just signed up to join the Marines and potentially go to Iraq. A U.S. Marine applies camouflage paint to a young woman’s face at an event at Orchard Beach in the Bronx in 2007. A girl and boy dress up as Marines during Fleet Week at Orchard Beach in the Bronx in 2007. The boy is holding an M4 carbine, which is replacing the M16 as the Marine Corps standard rifle. 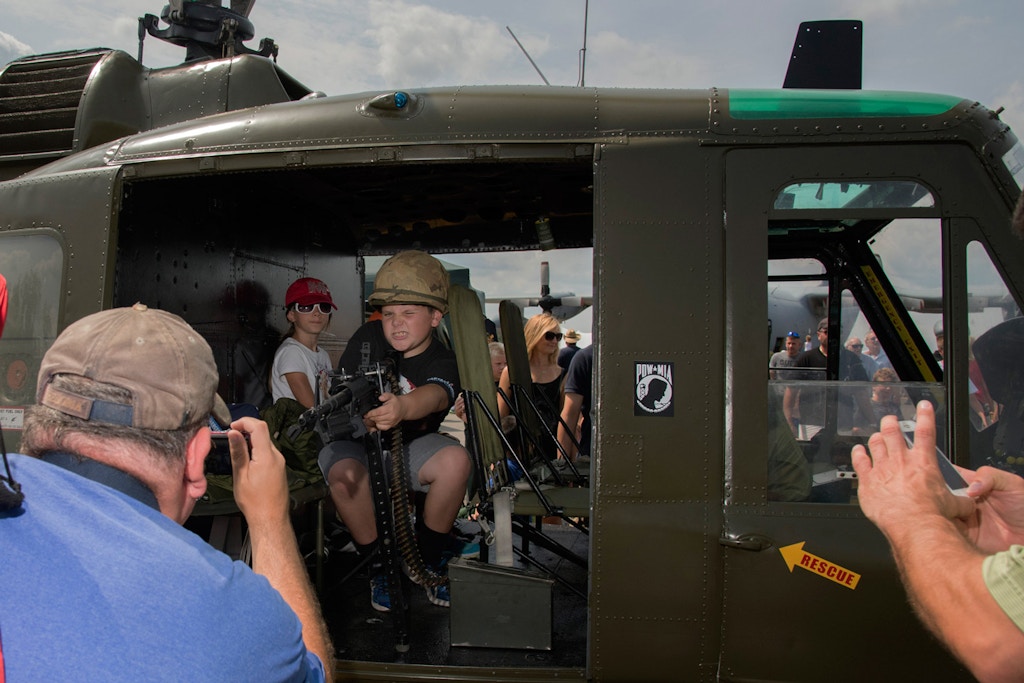 A young boy “shoots” a machine gun from a Vietnam-era helicopter at the New York Air Show in 2015. There are no certain statistics for the number of Vietnamese casualties during the war, but at least 1 million died, and potentially 2 million or more. A 1991 survey found that Americans estimated that about 100,000 Vietnamese had been killed. A U.S. Marine helicopter prepares to land for a raid demonstration during Fleet Week at Orchard Beach in New York in 2007. Parents and children run toward a V-22 Osprey, which takes off like a helicopter and flies like a plane, during Fleet Week in New Rochelle, New York, in 2015. Seven of the aircraft have been destroyed in crashes, and there have been 36 fatalities. 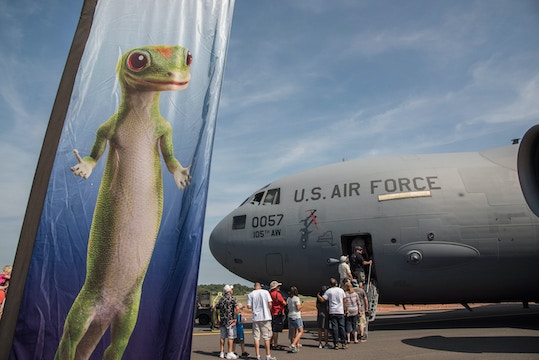 A Geico ad in front of a C-17 Globemaster transport plane at the New York Air Show in Newburgh, New York, in 2015. This particular plane was hit by a ground-to-air missile while taking off from Baghdad Airport in December 2003; one engine was destroyed, but the plane returned and landed safely. The annual Thunder Over the Boardwalk event in Atlantic City, New Jersey, in 2007. This year’s event will be sponsored by, among others, Bank of America, Chevrolet, Comcast, and Horizon Blue Cross Blue Shield of New Jersey. A B-2 stealth bomber at Atlantic City’s Thunder Over the Boardwalk event in New Jersey in 2007. Each B-2 costs approximately $1 billion; analysts now believe it is a “virtual certainty” that Atlantic City will be forced to declare bankruptcy. The Air Force Thunderbirds fly F-16s over a Hudson River pier during Air Force Week in New York in 2012. The Thunderbirds are named after a mythological creature from Algonquin and Ojibwe Native American culture. (The Statue of Liberty is a miniature that was on display at a souvenir store on the pier.) The gift shop by the Battleship New Jersey in Camden, New Jersey, in 2015. The now-famous “We Can Do It!” poster was created by Westinghouse, and during World War II, it was seen only by workers in several company factories; it became nationally known after being rediscovered during the 1980s. About 50,000 people attended the parade in Raleigh, North Carolina, during the April 2008 Salute to Our Troops event. It is said to be the biggest military appreciation event in the city’s history.

Nina Berman is the author of Purple Hearts: Back from Iraq and Homeland and is a member of the NOOR photo collective.