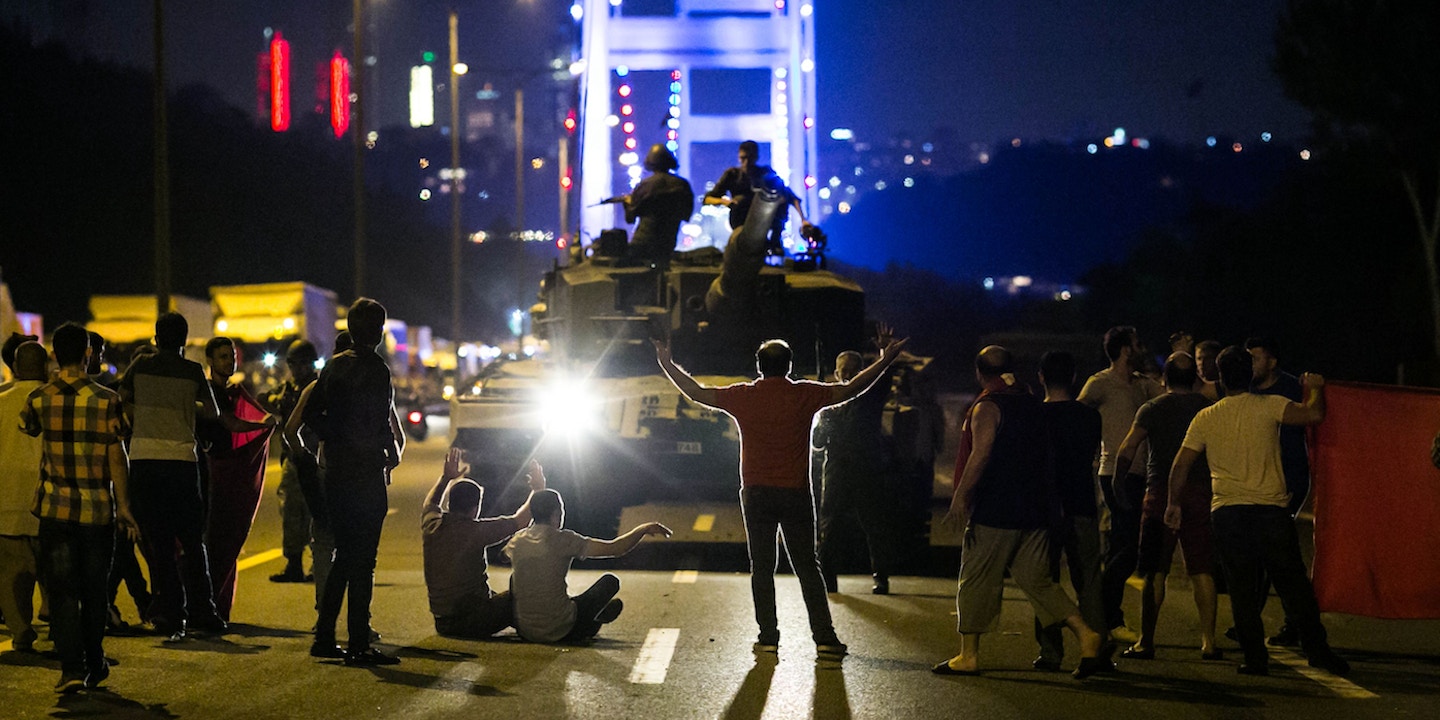 Much respect to Robert Mackey and The Intercept for clarifying the Turkey pre-purge coup attempt. Now it makes sense why Turkish citizens were beating, whipping and kicking Turkish soldiers.

Video proof that when a military force turns inward on its own people, personal firearms are no match for tanks, let alone helicopter gunships.

This is exactly what we are flirting with here in the US when we give the cops military equipment. There is not one person who wears a uniform, anywhere in the world, who is not a baby killing rapist and monster! Humanity is totally insane!

Mr. Mackey, you should be paying more attention to Arby.
The coup plot about Turkey is thickening. Aside from misinformation from bloggers like Benito Mussolini who tried to distract from U.S. involvement in the coup…
“… The attempted coup appears to have been an amateur effort. As one ex-CIA employee sniffed… Social media is important, but not because it thwarts coups in and of itself. Its continuance during a coup is a bellwether, however, a sure sign the CIA is not involved …”

I beg to differ.

…The base (Incirlik) was an operational center of the attempted coup. Its commander and his subordinates were arrested on suspicion of trying to overthrow the Turkish government, leaving junior officers in control…

The top military official at Incirlik Air Base has been arrested, along with other officers at the base — a major U.S. air operations center in the Middle East — in connection with an attempt by a military faction to overthrow the government of Turkey, authorities said Sunday…

Van was among 10 soldiers arrested at the base, part of an operation Turkish officials say provided air-to-air refueling for F-16 fighter jets deployed by the leaders of the coup attempt Friday night and Saturday morning…

Labor Minister Suleyman Soylu said he believed Washington was behind the coup.

…Brad Sherman, a Democratic congressman from California, suggested that a coup could bring about “real democracy,”

Ret Lt. Col. Peters:  “If the coup succeeds, Islamists lose and we win.”

Is it just Arby and I, or is everybody ignoring the elephant in the room Mr. Mackey?

As much as it pains me to partially defend an arse such as Trump, his statement contains one definite error, not two. Garbled language aside, it is true for him to say that ‘army types’ (in tanks/APC’s) drove over protesters during the Tiananmen Square massacre; there are reports of this happening both as the PLA entered the suburbs of Beijing on June the 3rd 1989, and as the students left the square on the morning of the 4th.

Yes, ‘Tank Man’ himself was not run over, but Trump doesn’t appear to be talking about one man. You make the link between his words and one iconic photo and, in doing that, imply that Trump said something he didn’t, and partly obscure what happened in China in 1989.

Trump may well know nothing about Tiananmen, and might not care whether or not what he’s saying is true . But when reporting on someone who is famed for not checking his facts, it’s even more important that you are tight with yours.

After views tanks rolling over civilians, my concern over militarized police and our yuge military made me wonder how many military units in the US are so disciplined that they would also kill civilians because of orders from superiors.

“defend another member of the NATO alliance in the event of a Russian attack”? Really? How about defending Russia after ever more NATO encroachment in violation of an agreement? NATO is the aggressor here, not Russia.

The Chinese tanks ran over more people in Tienanmen square than were ever killed in Turkey.

Trump has NEVER let something as irrelevant as the facts affect what he says, and that’s just fine with his supporters. Which will make the night of the election (and the subsequent days) a time when foreign governments should be issuing travel advisories for right now. Remember all that was claimed to happen in Iran after Ahmadinejad’s reelection? Take that, mix in armed police not shy about shooting, armed extremists who feel that any result but them being in charge is morally offensive and only possible through rigging, and several decades of NRA propaganda about said extremists guns being the foundation of democracy.

Which headline would you rather click on? Neither is a valid answer.
Really, this space could have discussed the black man gunned down by police who were actually trying to gun down the black autistic man with a toy truck in his hands.

That’s all you have to say about the failed coup?! You do know that the US was behind it, Don’t you?

I’m starting to think President Gump would be better prepared than a President Trump.

And pretty sure that man was never seen again