A leaked trove of emails from the Democratic National Committee reveal testy exchanges over the Bernie Sanders campaign. 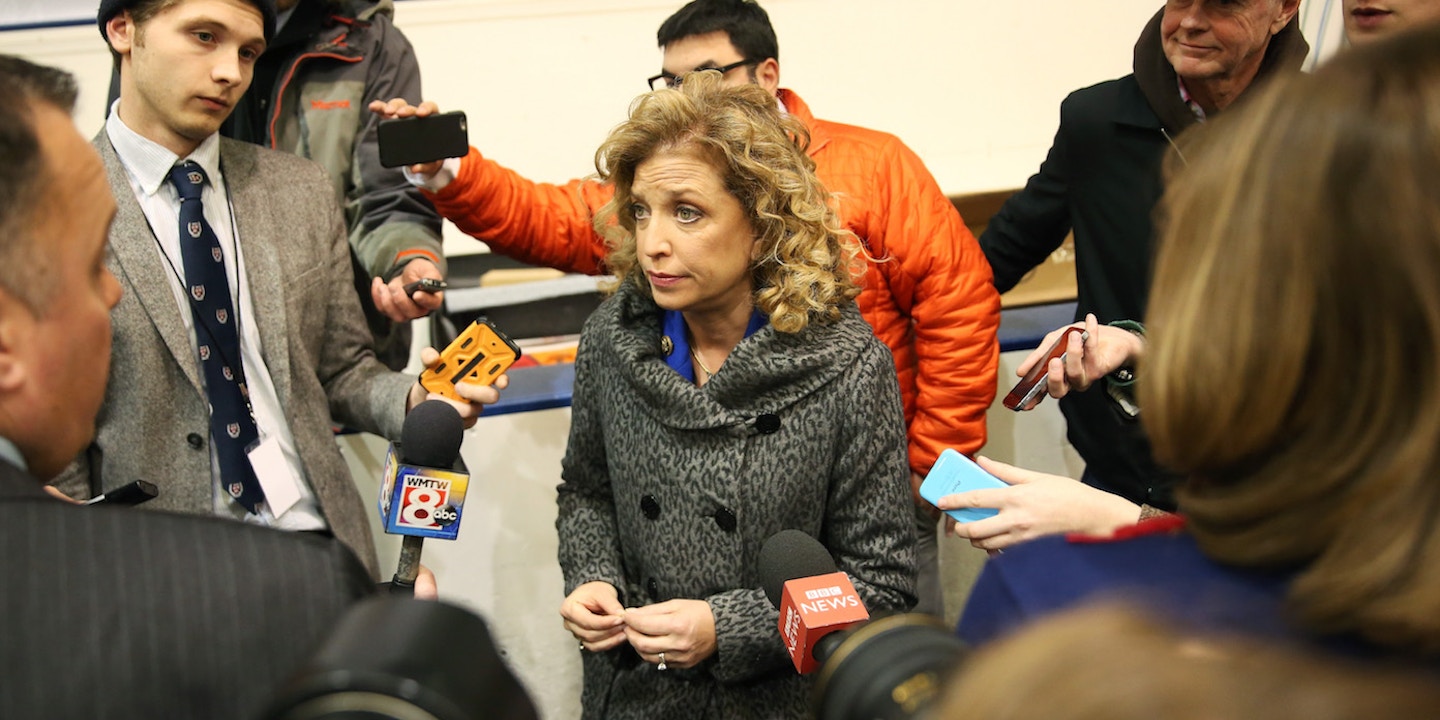 A new trove of internal Democratic National Committee emails, stretching back to April 2016, released by Wikileaks show that the organization’s senior staff chafed at Bernie Sanders’s continued presence in the presidential primary. Staffers were also irritated by criticism that they were biased towards Hillary Clinton.

In May, chairwoman Debbie Wasserman-Schultz (DWS) reacted to an MSNBC anchor criticizing her treatment of Bernie Sanders during the Democratic presidential primary by trying to force her to apologize.

On May 18th, DNC staffer Kate Houghton forwarded to Wasserman-Schultz a Breitbart News story highlighting remarks by MSNBC anchor Mika Brzezinski in which she called for the chairwoman to step down over perceived bias against Sanders during the presidential primary.

Wasserman-Schultz reacted angrily, writing that this was the “LAST straw” and instructing communications director Luis Miranda to call MSNBC president Phil Griffin to demand an apology from Brzezinski.

Miranda noted that Wasserman-Schultz had reached out to NBC’s Meet the Press moderator Chuck Todd on the subject earlier. You can see that email below:

Later in the day, Miranda sent a follow up email to Todd laying out a memo trying to convince him that Wasserman-Schultz was not in fact unfair to Bernie Sanders. Todd asked him if a call with Brzezinski was really a “good idea.”

Miranda tried to de-escalate the situation, telling him that “if Mika just doesn’t like [Wasserman-Schultz], I’m not sure it’s worth either of their time”:

Annoyance at Bernie Sanders and his fans is a reoccurring theme in the emails.

Three weeks prior to the Democratic primary in California, the largest primary of the contest, DNC staffer Mark Paustenbach, the organization’s national press secretary, sent an email to Miranda pitching an anti-Bernie story that the candidate “never got his act together, that his campaign was a mess”: 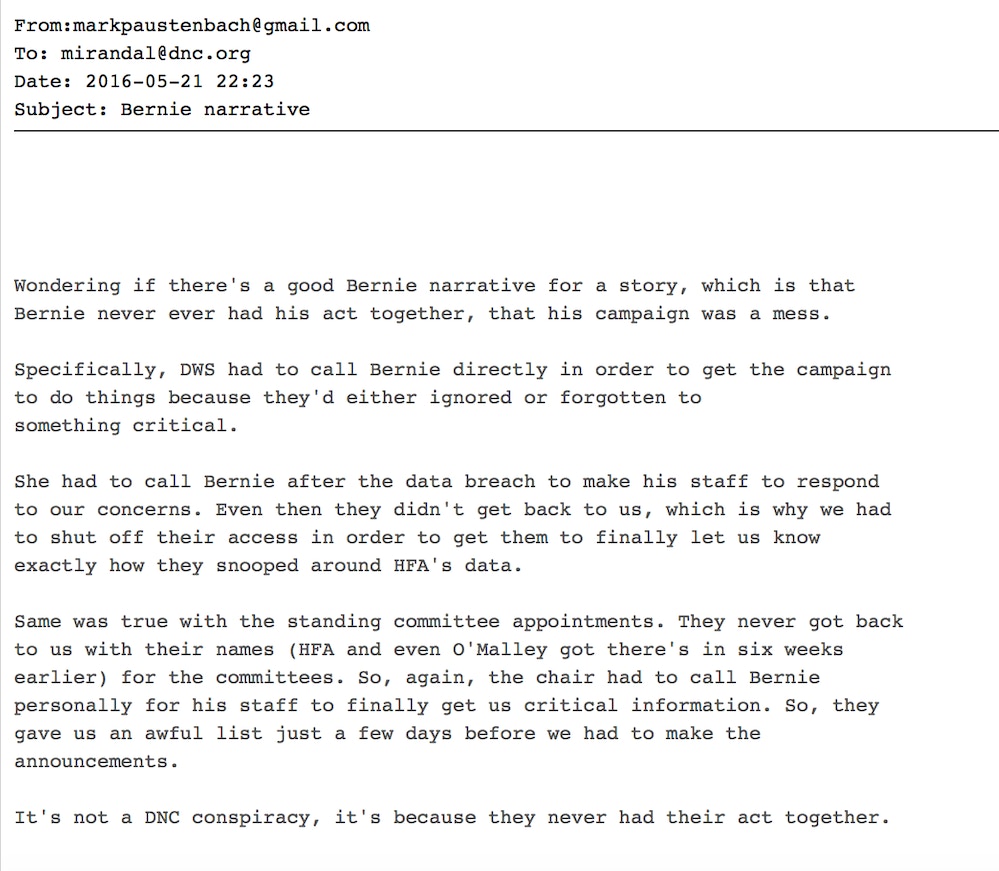 A day earlier, Miranda complained that Sen. Claire McCaskill, D-Missouri, had “no backbone” for complaining that DNC head Wasserman-Schultz shared some responsibility for divisiveness in the party.

Paustenbach was trying to respond to a press inquiry about a raucous Nevada state convention where the news media and opponents of the Sanders campaign complained that there was violence, including thrown chairs, that didn’t actually happen: 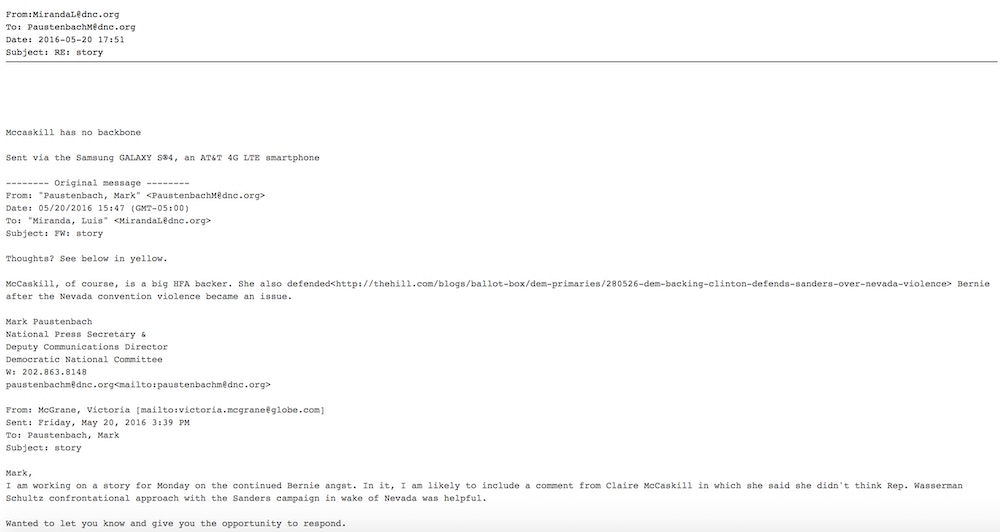 When Sanders campaign chair Jeff Weaver appeared on cable news to defend the conduct of Sanders backers at the Nevada convention, Wasserman-Schultz reacted harshly, writing:  “Damn liar. Particularly scummy that he barely acknowledges the violent and threatening behavior that occurred.” There was no apparent effort made to actually investigate the claims against Sanders.

As early as the end of April, the DNC was mocking up emails to message to their base about the end of Sanders’s campaign. Eric Reif, a digital staffer at the organization, sent around an email template that would be used by chairwoman Debbie Wasserman Schultz: DNC Deputy Communications Director Eric Walker, however, mocked as “#bernieclickbait” the idea that the DNC was tipping towards Hillary Clinton:

On May 2nd, a public relations staffer named Erik Smith sent an email to DNC officials updating them on the positions of both Democratic campaigns on a May debate in California. According to Smith, the Clinton team stated that they would not participate in a debate unless it was DNC-sanctioned:

On May 18, Wasserman-Schultz sent an email to communications staff listing out talking points defending her decision to schedule only a handful of debates during the primary season:

But Miranda reacted in a mocking tone to Sanders welcoming a debate in California, which the Clinton campaign had already agreed upon earlier in the primary season:

A day earlier, Fox News editor Bill Sammon forwarded a note to the DNC in which he offered both remaining Democratic candidates a chance for a televised debate in California.

That email was a follow up to one he wrote on May 13, formally requesting that the DNC sanction a debate in California. “Given that the race is still contested, and given that you sanctioned a final trio of debates, the last of which has not yet been held, we believe a final debate would be an excellent opportunity for the candidates to, as you said when you announced these debates, ‘share Democrats’ vision for the country,'” he wrote.

“I don’t really think this makes sense. The RNC would never do an MSNBC debate for the same reason that we shouldn’t do this one,” Wasserman-Schultz responded the same day.

On May 19, Miranda appeared on Fox News and told the network they were “negotiating” for another debate, and that they “know the interest is there.” The day before, Amy Dacey, the CEO of the DNC, signed off on that messaging. Although Sanders and Fox News both agreed to debate, the DNC and Clinton campaigned never sanctioned the debate and it never happened.