Protesters at the Democratic National Convention made clear that Hillary Clinton had better not take their votes for granted. 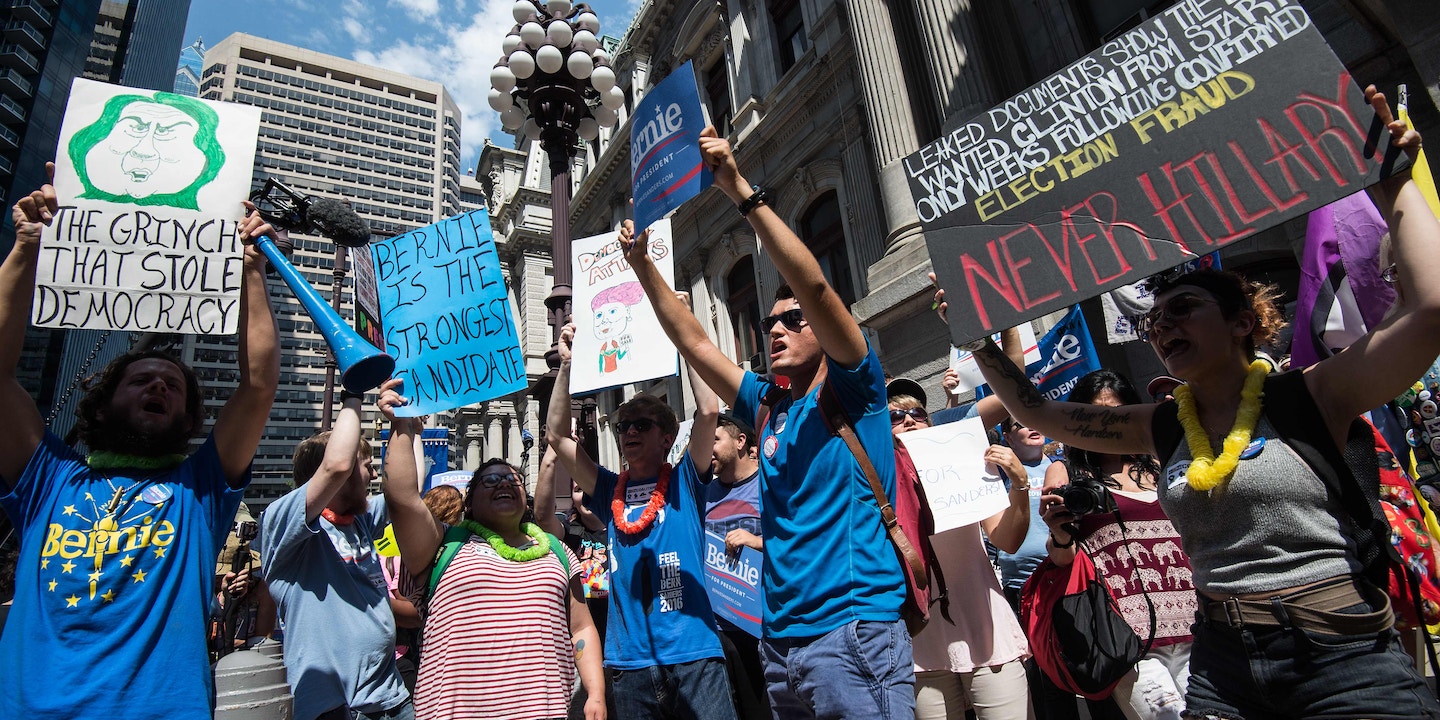 If the Democratic nominee were chosen by those who showed up in the streets of Philadelphia to protest the convention, there would be one uncontested winner. “The people want Bernie,” read a sign at a rally Sunday that drew the same enamored crowds that turned out for the Vermont senator along the primary trail. The sign summed up the general sentiment of the crowd, as the rally grew into the thousands and began marching from City Hall in 93-degree weather. As the DNC kicked off, downtown Philadelphia was all about Bernie.

Hillary Clinton’s name and image showed up mostly in signs and chants saying “Never Hillary,” “Warlord,” and “Hell no, DNC, we won’t vote for Hillary.” Last week’s DNC email leaks and the ensuing party scandal spilled into the streets, leaving Bernie supporters bitter and upset, and prompting calls for a “DemExit” from the party. Using the same slogans seen at the Republican convention in Cleveland, some Bernie supporters sported “Hillary for Prison” shirts.

Of course, it won’t be the crowds in Philadelphia — largely white, as was the case on the campaign trail — that determine the nominee. But the number of protesters claiming they will always be with Sanders, and the growing chorus of those considering a switch to the Green Party’s Jill Stein, should be cause for concern for a party that’s losing legitimacy with many supporters. On Sunday, a group of “Black Men for Bernie” carried a DNC coffin. On Monday night, a candlelight vigil will mourn “the death of democracy.”

As protesters made clear on Sunday, and then again at another pro-Sanders rally on Monday morning, they won’t vote for Clinton just to avoid a Trump presidency, and the Democratic Party better not take their vote for granted.

That’s a position that has been met with ire and ridicule by many Clinton supporters and party loyalists, accusing Sanders die-hards of blind privilege and blaming them for a potential Trump victory. But many of those showing up in Philadelphia are not interested in “voting for the lesser of two evils,” as several people defined their options. “If your conscience lies elsewhere, you need to vote that way,” said Jeremy Thompson, a computer engineer from New Hampshire who took a Megabus to Philadelphia for the day, after the event transportation company Rally Bus canceled dozens of booked trips at the last minute. “Right now we have organized political parties that are ignoring the masses. If you vote the Democratic bill just because you think you have to oppose Trump, then you’re encouraging the Democratic Party to repeat the same horrific maneuvers they did this year and repeating the process of signing over our democracy out of fear.”

Thompson said he was “horrified” at the prospect of a Trump presidency — but that he won’t blame himself if that happens. That’s on the Democratic Party, he said.

“People might write in Bernie, they might write in Mickey Mouse, or they might vote for Jill Stein, but they’re not going to vote for Hillary just because the Democratic Party has engineered a situation where that’s their only choice,” he added.

While protesters at Monday morning’s rally agreed on their candidate of choice — some even holding out hope for an improbable reversal on the convention floor — there was less consensus on what to do next.

Some added “Or Jill” to old Vote Bernie signs, and many lifelong Democrats said this election cycle has left them irreparably disillusioned with a party that fails to reflect their values.

“I was a little upset he endorsed Hillary, but he didn’t concede. He didn’t drop out, and I’m not going to give up on him.” Crosby said he believes a Clinton or Trump presidency would be “equally bad.”

“I think they’re about the same. Hillary is just as bad, she gets away with a lot of stuff that is above the law,” he said. “I’m not going to vote for someone I don’t believe in.” Caitlin Codini traveled from Seattle to protest at the Democratic National Convention.

But others at the rally, as fervent in their support for Sanders, wouldn’t go that far, and many said they simply “don’t know” what they’ll do in November.

“That’s a terrifying thing for me to think about,” said Caitlin Codini, who crowdfunded her trip from Seattle. “I’ve always said that I would support Hillary Clinton for those two seconds in that voting booth if it came down to it, but I’m hoping it doesn’t come down to that, because I really don’t want to do it.”

“And I also don’t want Donald Trump to be president,” she added.

Codini had attached a “still” sign to her Feel the Bern poster. But asked whether Sanders himself was still “feeling the Bern,” she seemed more uncertain. “God, I hope so.”