Will Bernie’s Supporters Stay Home on Election Day? We Asked Them.

For many, the road to Sanders’s Monday speech in Philadelphia stretched back nearly five years, to Zuccotti Park and Occupy Wall Street. Today, they remain, in large part, profoundly disillusioned. 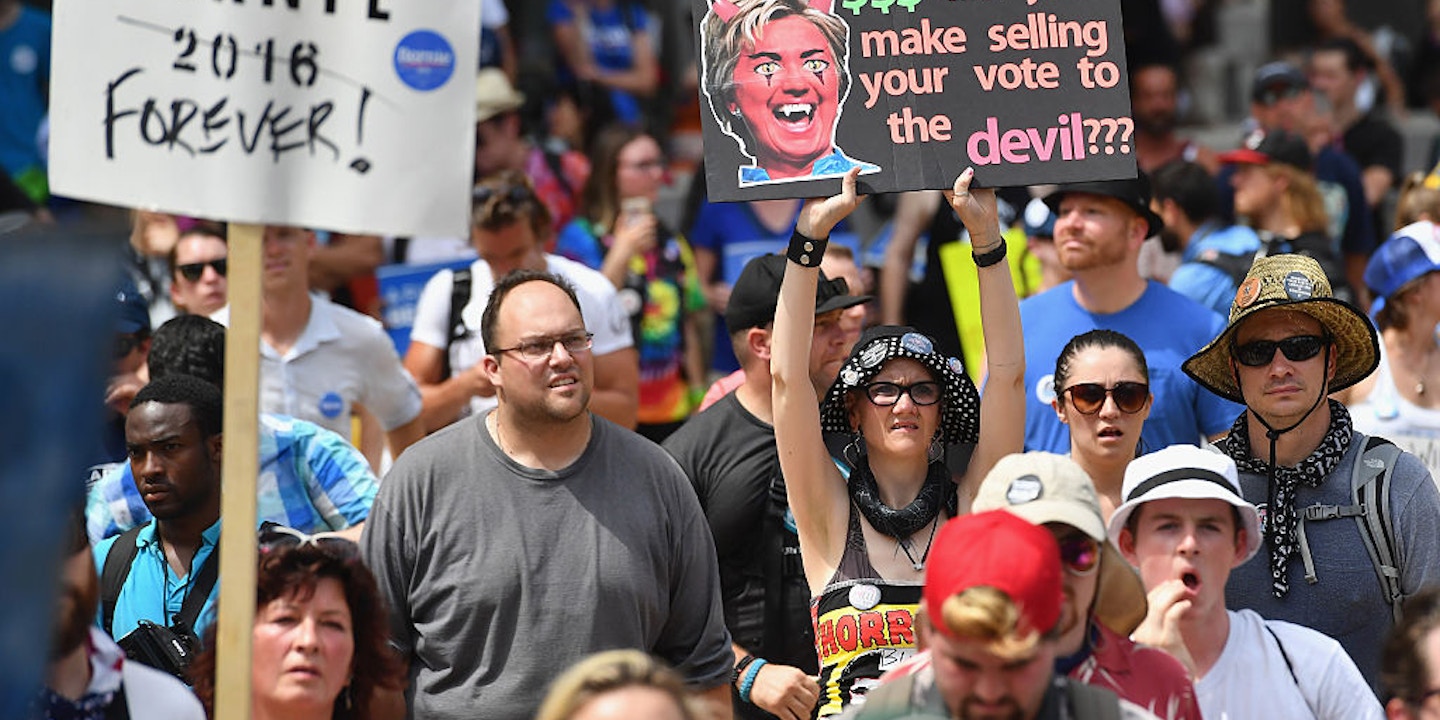 Tuesday morning was a rough one for Bernie Sanders, but maybe an even rougher one for the people who helped make him a household name.

For many, the road to Sanders’s Monday speech at the Democratic National Convention in Philadelphia stretched back nearly five years, to Zuccotti Park, when a motley collective of anarchists, labor organizers, and intellectuals sparked a nationwide movement when they decided to step outside the ordinary channels of dissent, pitch a tent, and Occupy Wall Street. The movement and its approach — social justice, economic fairness, civil disobedience, and an unwillingness to compromise with existing power structures — outlived the occupation, finding an unlikely voice and millions of new adherents in the insurgent primary candidacy of Bernie Sanders, senator from Vermont, who was elected as an independent and describes himself, without apology, as a democratic socialist. Sanders mounted a serious challenge to favorite Hillary Clinton for this year’s Democratic nomination, giving thousands of his young followers their first taste of what it feels like to participate in the American electoral system, and to win, taking more than 40 percent of the popular vote and winning 23 states outright.

That road turned sharply last night in Philadelphia, when Sanders took the stage at the Democratic National Convention and attempted to throw his weight behind Clinton, the presumptive nominee. Unlike Sen. Ted Cruz, the Tea Party purist who did not endorse Donald Trump in Cleveland, Sanders chose to fully ally himself with his party’s nominee. He did so at the risk of offending the activist core who helped give him a seat at the table in the first place.

After several large street protests in the afternoon, the convention floor was mostly orderly last night, though a few delegates wore blue tape over their mouths. The pro-Bernie booing and chanting that provoked some awkward onstage ad-libbing from Sen. Al Franken and comedian Sarah Silverman midway through the program had mostly settled down by the time Sanders himself took the stage. There was a 60-person Occupy-style “mic check” after the convention adjourned. After midnight, on Packer Avenue, there were shouts of “Never Hillary!” as two Sanders supporters made their way back toward the city on foot.

“Maybe it was a mistake to build our movement around Bernie,” said Justine Tunney, a software engineer. “It empowered him to funnel that will into Hillary.”

“We need a movement that truly represents the will of the people,” she added. “We need a popular movement. Populism is great. How is it a controversial idea that government should care about the will of the people? There are two populist candidates: Bernie Sanders and Donald Trump. The establishment has forced us into an impossible position by taking away one of those choices. What do they expect us to do? Stay home?”

I asked Tunney whether I should interpret what she said as support for Trump. “Not necessarily,” she said. She declined to say what she would do if the election were held today. “I’m still coming to terms with the fact that Bernie probably isn’t going to get the nomination,” she said.

Tunney was eating lunch at a vegetarian restaurant in Center City with Micah White. White came up with the initial idea of Occupying Wall Street during his time at Adbusters, the Canadian anti-consumerist nonprofit. He has filed the paperwork to run for mayor of Nehalem, Oregon, the small town where he lives with his wife and son. He told me that he does not generally vote in presidential elections, and does not plan to vote in November.

White seemed to put Sanders on a slightly lower pedestal than Tunney did. But like Tunney, he said that the endorsement of Clinton left him in a confusing position. “It was a strategic mistake to focus on a single charismatic individual rather than build an actual movement,” he added. White was also critical of Sanders using the word “revolution.” “He is degrading the meaning of the word,” White said. “What he’s doing isn’t revolutionary. Revolution is when you change the way power flows in a society. Bernie is rallying people behind a major establishment candidate who’s raised more money than any other candidate in the election. His job now is to bring the far left into the political establishment.”

Nevertheless, White had managed to slip Sanders a copy of his book, “The End of Protest,” that very morning. (The book calls for activist movements to move beyond “disruptive tactics” and to come up with innovative new tactics that “harness the creativity of people from across the political spectrum.”)

Some believe that Sanders did right by his movement, bringing activists onto the convention floor and pushing the Democratic Party to reform its primary system. “Bernie held onto his principles even when they went out of fashion and lived long enough to see them become popular again,” my colleague Murtaza Hussain wrote last night.

But not everyone viewed the situation so optimistically. After lunch, I saw a man in his late 20s in a T-shirt marching toward City Hall. He carried a ragged red flag, the size of bedsheet, which was stapled to a long wooden pole. His name was Scott Warren. He said that he was 27 years old and lives in Center City.

The red flag, he said, did not signify Communism, but something more personal. “The flag means general dissent,” he said. “I picked it up at a march yesterday. I had my own sign. It said ‘Syrian Children’ on it. The march was about not just the election but war, the environment, Black Lives Matter. And I don’t see enough people talking about the bombings going on in Syria, or the CIA-backed ‘moderate’ rebels who are killing kids. Nobody is really talking about that. So I quickly made a little sign that said ‘Syrian Children’ on it. The march started off at City Hall and it went all the way down to FDR Park, at Wells Fargo. It was like three thousand. Maybe ten or twenty thousand at its peak. But my sign fell apart in the rain. So now I have this flag.”

I asked him again what the red flag meant.

“I’m not just going to walk down the street and pretend that nothing is wrong,” he said.“My putting the flag up means I’m not happy. Things are bad. I mean, I think things are bad.”

Warren said that he had volunteered for the Sanders campaign, the first he had ever been involved with. “I phone banked, a little bit. I went to several marches in Philly. I came [with] money. Some. Not much. Just ’cause I’m like, you know, income-low.” He works at the Philadelphia Zoo, he said.

“The DNC itself is a sham to me,” he said. He accused the DNC of election fraud. As evidence, he cited recently released emails, discrepancies between exit polls and actual results, and “collaboration between the media, or mainstream media, with the Hillary campaign along with the DNC.”

As for Sanders’s endorsement: “To me, I think he fears Trump. I fear everybody. You can’t expect, voting for the lesser evil every four years, for things to get better. The lesser evil eventually becomes the greater evil.”

Like Tunney, Warren declined to say whom he would choose between Trump and Clinton if the election were held today. Unlike with Tunney, I may not have asked him the question directly.

The Trump campaign has been making efforts to court disaffected Sanders supporters like Warren, appropriating rhetoric like “rigged system,” which originated with left-wing critiques of the two-party electoral process and which appeared in Sen. Elizabeth Warren’s Monday night speech.

Justin Molito, a union organizer from Connecticut and committed Sanders delegate, had been listening to Scott Warren’s words. His convention credentials were adorned with buttons for Bernie and against the Trans-Pacific Partnership. He had come from an event organized by Working Families, an advocacy group focused on economic inequality, but swung by a delegate event at the Capital Grille on Broad to grab a free sandwich when Warren walked by with his red flag.

“I’ve yet to meet a Bernie Sanders supporter who would support Donald Trump,” he said. “I think it’s a bit of a media construct. That [Trump] is obviously not an option. I live in a state that’s likely not to be that close. But if I feel like I have to vote for Hillary Clinton to stop Donald Trump from becoming president, that’s what I’ll do.”