As the Syrian Government Tightens Its Noose, Aleppo’s Doctors Fear the Worst

With a key road cut off, and facing strikes by Syrian government and Russian forces, Aleppo City faces an unprecedented humanitarian crisis. 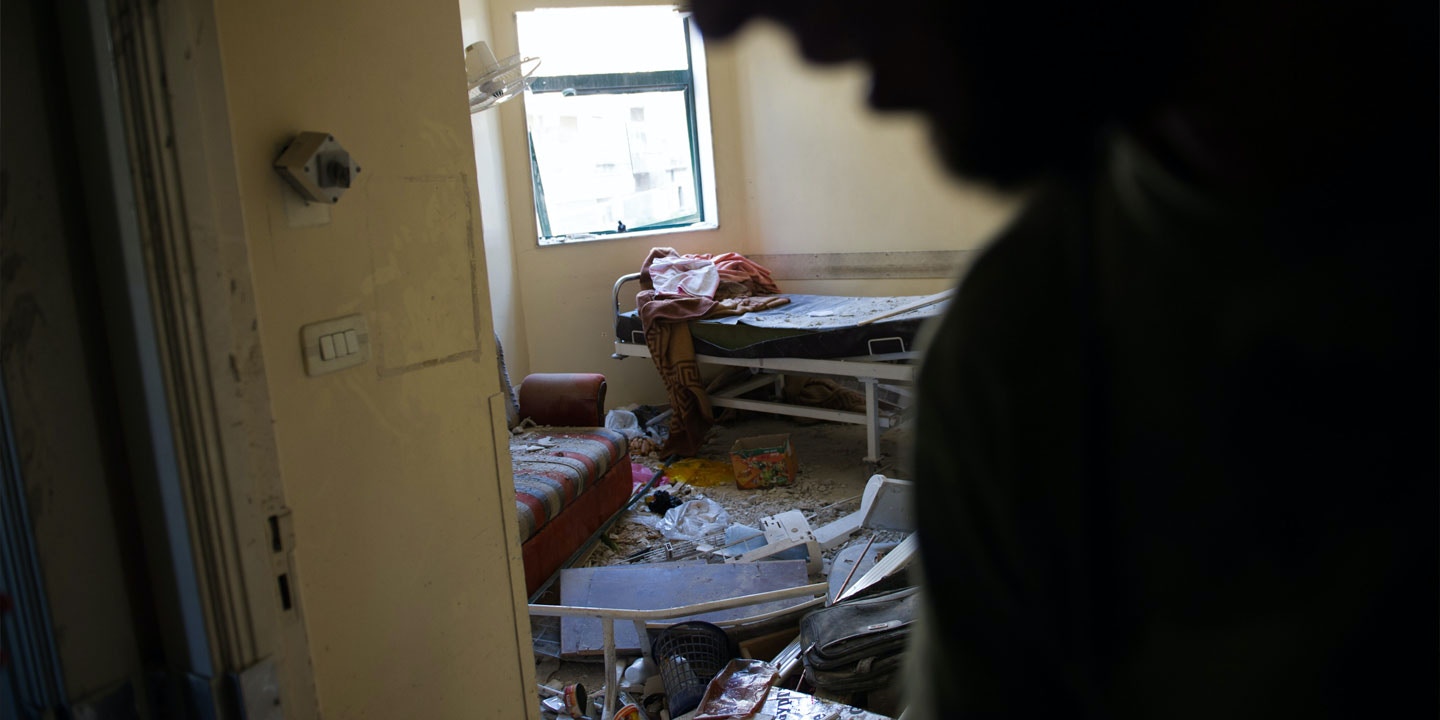 It was just before 4 p.m. local time last Friday in the northern Syrian city of Aleppo when Dr. Farida Almouslem picked up the phone. With bombs falling outside, the 37-year-old calmly described the chaos unfolding around her. “I’m at home and staying in the middle of my home, because airstrikes are hitting us now,” she said. “We are hiding inside our bathroom.”

For four years now, Aleppo City, Almouslem’s hometown, has been a centerpiece in Syria’s brutal civil war, controlled by Syrian President Bashar al-Assad’s regime to the west and opposition forces to the east. The period has been marked by tragedy, bloodshed, and, for the more than 2 million people who called the city home when the fighting began, widespread collective trauma. The situation has now gone from bad to worse. On July 7, just hours after Assad announced a three-day ceasefire, the Syrian president’s forces seized control of Castello Road, a vital artery that supplies anti-government forces with weapons and provides life-saving food and medicine to the civilians still living in opposition-controlled eastern Aleppo. “We are under siege now,” Almouslem said.

The Russian government has now said it will open humanitarian corridors to allow the besieged population safe exit, though people on the ground question how that proposal will play out. Speaking to The Intercept, Almouslem described the bleak circumstances in which medical workers and ordinary civilians in Aleppo find themselves. “The regime is killing us every day,” she said. “If they take Aleppo City, they will kill everyone.”

As Assad and his Russian allies have systematically targeted medical facilities with airstrikes, the number of doctors in Aleppo City has plummeted into the low dozens. The number of remaining medical specialists is even smaller. Almouslem, who specializes in obstetrics and gynecology, says she is one of two doctors left — in a besieged city of 300,000 — whose professional focus is on women’s health and delivering babies.

Eastern Aleppo City’s medical professionals often work underground, in the basements of crumbling buildings that serve as ERs, patient wards and operating rooms all rolled into one. Eight such facilities continue to accept patients in rebel-held territory. Almouslem’s hospital, Omar Ibn Abdel Aziz, has long been the only functioning medical facility in its pocket of eastern Aleppo City. According to the U.N., the hospital has served “an average of 5,500 outpatient consultations, 125 obstetric deliveries, 74 caesarean sections and 143 major surgeries per month.” 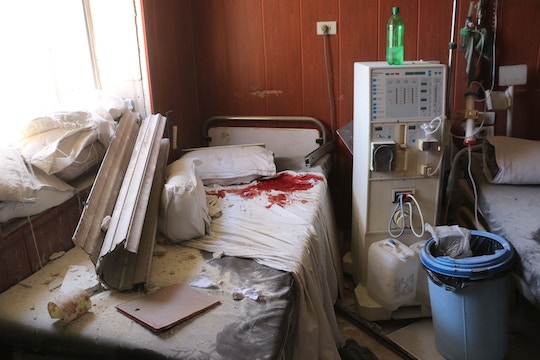 Damage inside the Omar Ibn Abdel Aziz hospital in the northern Syrian city of Aleppo after a barrel bomb struck on July 16, 2016.

Over the course of 45 days this summer in June and July, Omar Ibn Abdel Aziz was hit by at least three airstrikes. Almouslem was inside the hospital during two of the air raids. She was performing a caesarean operation during one of the assaults and her incapacitated patient had to be rushed to a nearby house. The third and most devastating attack, which injured a number of staff members, took place on July 16, and reportedly included a barrage of barrel bombs — one of the Assad regime’s signature aerial weapons — followed by Russian airstrikes. Footage purporting to show the aftermath of the attack depicted injured children and babies in dust-filled rooms and rescue workers with headlamps carrying wounded patients through darkened hallways.

Assad’s push to retake eastern Aleppo City has relied on the use of overwhelming airpower, often in conjunction with the Russian military. According to the BBC, Syrian and Russian forces pounded opposition-held areas with more than 600 airstrikes in the span of just six days during the first week of July, killing 126 people — rebels responded by firing rockets into western Aleppo, killing 58 people. Since then, warplanes have showered eastern Aleppo City with bombs. “Every day, every day,” Almouslem said. “Every three or four hours.”

Since the regime seized Castello Road, residents of eastern Aleppo City have felt the noose tightening. Samer Attar, a Syrian-American physician based in Chicago, described the closure of Castello Road as a “catastrophic turning point” and detailed the horrific challenges that eastern Aleppo City’s medical community and civilian population are now facing. Attar, an orthopedic surgeon, was in Aleppo City when the Assad regime ramped up its offensive earlier this month, and caught one of the last rides out of the city before the siege began. “I saw horrifying things — children getting amputations, civilians showing up with their intestines spilling out of their bellies,” he said.

Now, there are no cars on the street, fuel is hard to come by, and driving is dangerous. Electricity is available for no more than six hours a day. Aleppo’s residents “rely on the fact that Castello Road is open for humanitarian aid, humanitarian supplies, food, cooking oil,” said Attar, speaking to The Intercept Wednesday night.

With the last remaining roadway connecting eastern Aleppo City to the outside world now severed, humanitarian groups are sounding the alarm over a potential disaster in the making. In a statement before the United Nations’ Security Council Monday, Stephen O’Brien, the U.N.’s undersecretary for humanitarian affairs and emergency relief coordinator, described the deteriorating developments in eastern Aleppo as “medieval and shameful,” highlighting repeated attacks on Almouslem’s hospital, in particular, as evidence of the dangers the city’s civilian population now faces. “I cannot stress enough how critical the situation is for those trapped in eastern Aleppo City,” O’Brien said. Residents of rebel-held Aleppo plant their own crops as they try to become self-sufficient confronted with the scarcity of food products, March 26, 2016.

Marianne Gasser, the Red Cross’s most senior official in Syria, who is currently in Aleppo, echoed O’Brien’s sentiment, calling the situation “devastating and overwhelming.” Human Rights Watch, meanwhile, called on U.S. and Russian officials “to press the Syrian government and other warring parties to allow unhindered access to aid” and noted that intentionally starving civilian populations is a war crime.

Assaults on medical facilities in Aleppo City, a well-documented tactic of the Assad government, continued through last weekend. While Almouslem’s hospital was spared this time around, at least four hospitals and a blood bank in opposition territory were battered by repeated airstrikes over two days. According to UNICEF, a pediatric hospital it supports in the neighborhood of al-Hakim — “the only one in the city” — was reportedly attacked twice in the span of 12 hours. “According to reports, a two-day-old baby died in his incubator due to interruptions in the oxygen supply as a result of airstrikes on al-Hakim,” the organization said in a statement Tuesday. Hours after the bombs began falling last weekend, Assad said he was prepared to continue peace talks.

Despite the rapid depletion of resources, Almouslem has continued her work on a bombed-out floor of her hospital, as well as in her own private clinic. The siege has made her 12-hour days all the more grueling. While temperatures soar over 100 degrees Fahrenheit in Aleppo City, Almouslem works in operating rooms with no air conditioning.

“The average number of patients I see per day is 120,” she said. “They come for deliveries, for exams, for everything,” she explained. “Every day we deliver about 10 to 15 babies in our hospital.” 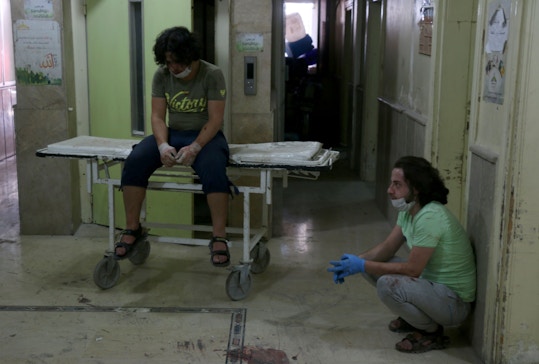 Critically, Almouslem said, the siege has cut off eastern Aleppo City’s access to life-saving shipments of medicine that used to arrive once a week. She pointed to Oxytocin, a hormone used to induce labor and control a woman’s bleeding after childbirth, as one example. “It’s a very important drug for delivery,” Almouslem said. As of last week, she estimated the city had about 20 days of Oxytocin left. Once it runs out, Almouslem predicts a “very, very big disaster.”

Aleppo City is one of the oldest continuously inhabited cities on the planet. Thousands have fled or perished since rebels swept into its ancient streets in the summer of 2012. Almouslem, however, has stayed. For her, Aleppo City, where she received her education and continues to live alongside her daughter, husband, mother, and sister, is home. If she left, she explained, the population she serves would lose half of its women’s health specialists. “I want to help them,” Almouslem said. What’s more, she added, the nature of the work she does allows her brief moments of relief from the violence engulfing her city. “When I see [a mother] smile after delivery,” she explained, “I forget everything.” Syrians help a wounded youth following an airstrike on the rebel-held Fardous neighborhood in the northern Syrian city of Aleppo on April 26, 2016.

On Thursday, Russia’s defense minister said three humanitarian corridors would be opened to allow civilians and fighters willing to lay down their arms escape eastern Aleppo City. UNICEF regional chief Juliette Touma told the BBC, “It is premature really to judge whether these humanitarian corridors are going to work or not.” U.N. Syria envoy Staffan de Mistura said he had not been consulted about the Russian offer and it was too early to comment.

The siege of Aleppo comes at a critical time for Western governments. A U.S.-led coalition force is currently intensifying operations in the region, some of which have turned increasingly bloody, in advance of major military offensives planned against Islamic State strongholds in the Iraqi city of Mosul and Raqqa, the extremist group’s de facto capital in Syria. Secretary of State Kerry, meanwhile, is pushing a controversial proposal that would see the United States working alongside Russia in conducting airstrikes in Syria to target Jabhat al-Nusra and the Islamic State — the idea being that in exchange for sharing targeting information, Russia would pressure the Assad regime to stop slaughtering its own people.

Critics have noted that working alongside the Russian military, which entered into the Syrian civil war in order to prop up the same Assad government currently choking the life out of eastern Aleppo City, could send a problematic message to U.S.-backed opposition forces on the ground — some of which have been targeted by Russian airstrikes in the past — and tip the balance of power in the conflict in favor of a murderous dictator.

Attar, the Syrian-American physician, believes the U.S. should take a far stronger public stance against the Assad government and its Russian allies. “Everyone saw this happening in slow motion,” he said. “Everyone saw the intensity of Russian bombardment escalating and Syrian government forces encroaching onto Castello Road.” He added, “Nothing was done.”

Almouslem, for her part, has no doubt that the Assad regime will not let up until it takes control of her city. When it does, she said, the consequences for her, and everyone around her, will be severe.

“It’s our nightmare,” she said.