Turkey launched its intervention in Syria both to take territory from the Islamic State and to halt gains by Kurdish-led groups empowered by the U.S. to fight ISIS. Five years after the start of Syria’s uprising, the Turkish military directly entered the fray last week, sending troops to occupy the northern Syrian town of Jarablus, previously held by the militant group the Islamic State. Turkey’s intervention represents a significant escalation of the conflict, as well as a sign that the country is likely to take a more aggressive approach to foreign policy following July’s failed military coup and subsequent purge.

But Turkey’s intervention is also an indication that the U.S. strategy of empowering Kurdish groups to fight the Islamic State in Syria has helped trigger an entirely new conflict, this time between U.S.-backed militias and a NATO ally.

Turkey launched its recent incursion both to take territory from the Islamic State and also to halt gains by the Syrian Democratic Forces and People’s Protection Units, Kurdish-led groups backed by the United States. The government in Ankara fears these groups will set up an autonomous Kurdish zone on its border, emboldening separatists within Turkey.

While many predicted Turkey’s government would become more inward looking following the failed coup, it seems as though the opposite may be the case. In a statement last week, Turkish Prime Minister Binali Yildirim said the country would be “more active in the Syria issue in the coming six months.”

Turkish-aligned rebel factions recently won a major battle to break a Syrian government siege in the northern hub of Aleppo, a region with historical ties to Turkey. With Turkish forces now directly operating on Syrian soil, it seems the conflict is entering a dangerous new phase of regional involvement. 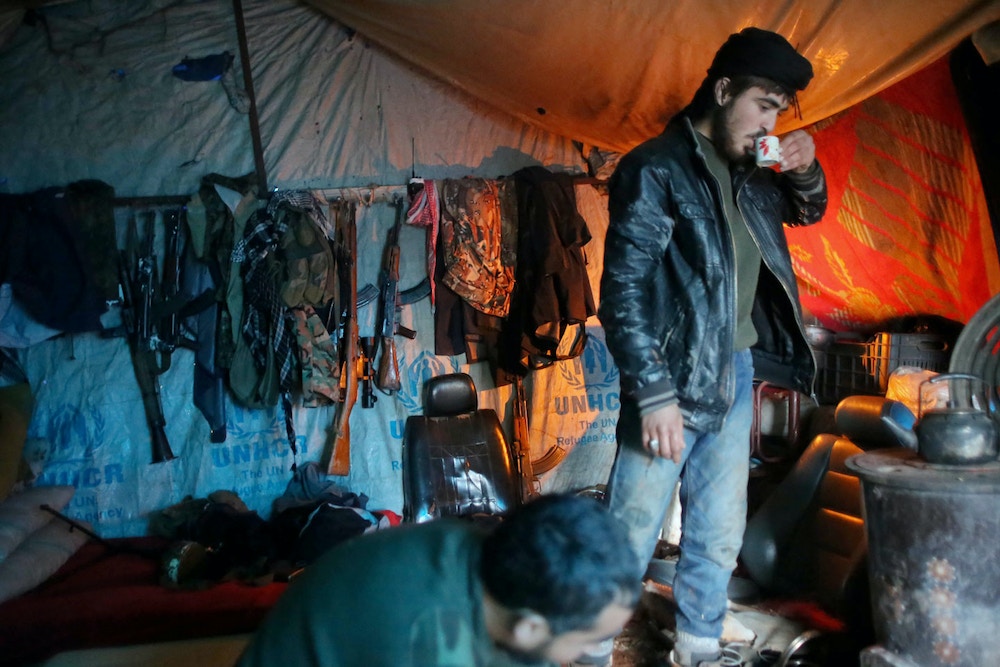 Opposition fighters from Ahrar al-Sham drink coffee inside a tent on Dec. 28, 2014, north of the Syrian city of Aleppo, as pro-government forces and rebels fight for control of the main supply route from Turkey.

This July, the Syrian army and its allies succeeded in cutting off the last supply road into rebel-held east Aleppo, placing part of the city under siege and stoking fears for the fate of 300,000 civilians still living there. Airstrikes on residential areas and the reported targeting of medical facilities by Syrian and Russian aircraft increased the misery of a city already suffering under years of war and deprivation. The Turkish government denounced the siege, seeing it as an attempt by Syrian President Bashar al-Assad to wipe out one of the few remaining opposition strongholds in the country.

But in early August, a coalition of Syrian rebels and Islamist groups in Aleppo, many of which are supported by Turkey, commenced a last-ditch operation aimed at breaking the siege. By August 8, it seemed that the rebels had struck an improbable victory, announcing that government forces had been driven out of the Al-Ramouseh district, effectively lifting the siege.

Ahrar al-Sham, an Islamist rebel group, was one of the major factions involved in the operation. Speaking to The Intercept after the battle, Abu Yusuf al-Muhajir, a spokesperson for the group, said that “the battles in Aleppo will not stop until we put an end to the regime’s existence,” adding that “the high-level coordination” among the separate rebel groups taking part in the offensive had helped tilt the balance.

The coalition to break the siege did include Jabhat Fath al-Sham, al Qaeda’s former affiliate in Syria, which claims to have broken with al Qaeda last month. Mostafa Mahamed, a representative for the rebranded group, said it played an “integral role” in breaking the siege. Regarding relations between rebel factions and Turkey, Mahamed said that “there was no collaboration with or assistance from any neighboring country” in the Aleppo offensive.

While rebel groups have said they have no plans to besiege government-held west Aleppo, analysts believe that a battle for control of the entire city could be forthcoming.

“A genuine battle for Aleppo city is certainly something [rebel groups] have talked about behind the scenes, but in the context of a multi-phased strategy, which is, in fact, already underway,” says Charles Lister, a senior fellow at the Middle East Institute and author of The Syrian Jihad. “Breaking the siege and isolating western Aleppo was the first step, but we shouldn’t be surprised if we see more of a push made elsewhere in the south of the city in the coming weeks.”

Aleppo, in addition to being pre-war Syria’s largest city and economic hub, is also, along with its countryside, arguably the most vital strategic prize remaining in the conflict. “Aleppo’s northern countryside is of critical value to Turkey, given the impending possibility of a de facto Kurdish federation emerging there,” says Lister, adding that control of the city has “immense emotive value” for both Turkey and the Syrian opposition.

There is also a deeper historical dynamic at play in the conflict. For hundreds of years, Aleppo was a territory of the Ottoman Empire, ruled from Istanbul. Following World War I and the Turkish War of Independence, the city of Aleppo was cut off from Turkish control and placed into the newly created entity of Syria, while many of its surrounding territories ended up across the border in Turkey. For Turkish nationalists, the Assad government’s assault against Aleppo seems almost like an attack on their own country.

“Aleppo has historical ties with Turkey. Turkey will not watch Aleppo fall to a side it does not prefer, because whoever takes Aleppo will have the best chance to win the whole country,” says Mete Sohtaoglu, a Turkey-based researcher on militant groups and contemporary Middle East politics. “Turkey’s purpose in intervening directly in the conflict is to introduce groups it supports as more vital actors in Syria’s politics.” Turkish soldiers stand on tanks in the southern region of Gaziantep on Aug. 25, 2016, as they prepare for a military operation into Syria.

While the Turkish intervention into Syria has been justified on the basis of taking territory from the Islamic State and bolstering Turkey’s own preferred rebel groups, leaders of the main Kurdish-dominated forces have said they are, in reality, the primary target of the offensive.

These groups have received U.S. backing and have made major gains against ISIS, most recently driving them out of the city of Manbij.

The Turkish government has long feared that Kurdish forces in Syria will carve out their own autonomous zone along the country’s border. Kurdish separatists within Turkey have been at war with the central government following a breakdown of peace negotiations in 2015.

Kurdish groups already control several self-governing cantons across northern Syria, which Kurdish-led forces are seeking to unite into one territory.

“The Kurdish factions see these actions by Turkey as an intervention to prevent them from uniting their cantons,” says Wladimir van Wilgenburg, a Middle East analyst with the Jamestown Institute and reporter on developments in Kurdish-held territory in Syria. “ISIS has controlled large parts of the Syrian-Turkish border and Turkey did nothing. It was only when the Kurdish-led forces threatened to unite their administrations that Turkey intervened.”

There are indications that the major parties in the conflict could be quietly reaching an agreement to halt Kurdish gains even as Aleppo remains in the balance. Turkey’s intervention into Syria has taken territory away from the Islamic State, but the Turkish military has already come into direct conflict with the Kurdish-led forces in the country, leading to casualties on both sides. The United States has also cautioned the Kurds to stay east of the Euphrates River, a clear warning against attempting to unite Kurdish territories in Syria.

“The Turkish operation was actually planned to begin about a year ago,” claims Sohtaoglu, the Turkey-based researcher, who says its implementation now reflects an understanding among Turkey, Russia, the United States, and perhaps even the Assad government.

In recent weeks, Turkish leaders have held high-profile meetings with officials from Russia and Iran — key allies of the Syrian government. In his statement last week, Prime Minister Yildirim said that Turkey would “not allow Syria to be divided on any ethnic base,” making an unsubtle reference to Kurdish separatists. Turkey’s incursion into Syria has been meekly protested by the Syrian government, which long ago ceded control over much of its northern border.

Turkey’s military intervention and the gains made by allied rebels in Aleppo suggest an increasingly forceful Turkish role in Syria’s civil war. The intervention places the U.S. in an awkward position, however, as it is now backing multiple hostile sides in an increasingly convoluted conflict.

“The Turkish intervention is a game changer in northern Syria, similar to the Russian intervention last year,” says Hassan Hassan, a senior fellow at the D.C.-based Tahrir Institute for Middle East Policy. “The rebels are more confident in Turkish help now and they’ll likely become more forceful in the way they fight on other fronts.”

Hassan says that newly emboldened rebel forces backed by Turkey will likely demand a leading role in taking back major cities from the Islamic State, which could “complicate the situation for the U.S., but it should not,” he says.

“Washington wanted the opposition to become more involved in the fight against ISIS, and this is happening.” 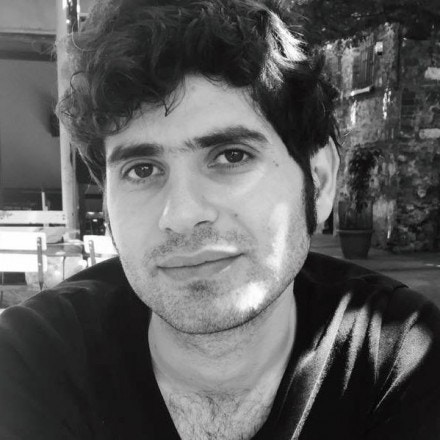