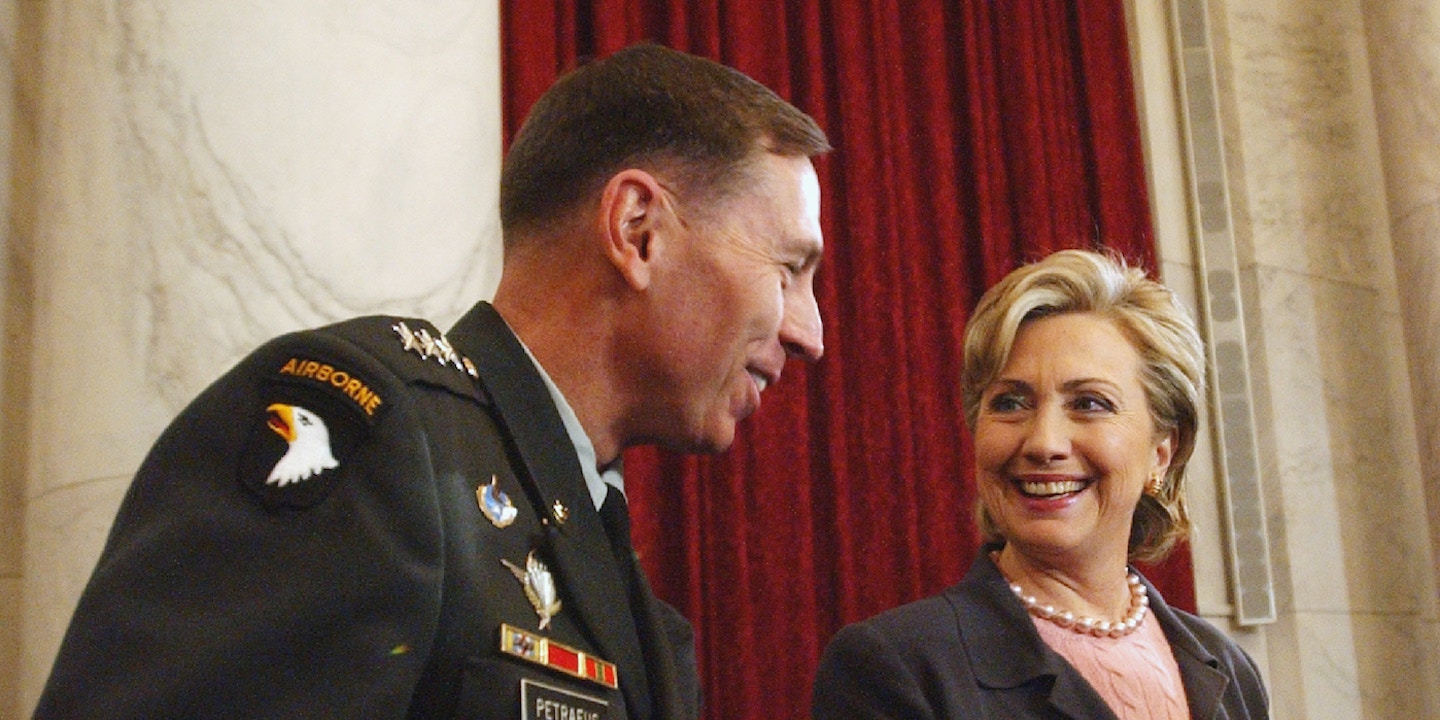 Hillary Clinton is meeting on Friday with a new national security “working group” that is filled with an elite “who’s who” of the military-industrial complex and the security deep state.

The list of key advisers — which includes the general who executed the troop surge in Iraq and a former Bush homeland security chief turned terror profiteer — is a strong indicator that Clinton’s national security policy will not threaten the post-9/11 national-security status quo that includes active use of military power abroad and heightened security measures at home.

It’s a story we’ve seen before in President Obama’s early appointments. In retrospect, analysts have pointed to the continuity in national security and intelligence advisers as an early sign that despite his campaign rhetoric Obama would end up building on — rather than tearing down — the often-extralegal, Bush-Cheney counterterror regime. For instance, while Obama promised in 2008 to reform the NSA, its director was kept on and its reach continued to grow.

Obama’s most fateful decision may have been choosing former National Counterterrorism Center Director John Brennan to be national security adviser, despite Brennan’s support of Bush’s torture program. Brennan would go on to run the president’s drone program, lead the CIA, fight the Senate’s torture investigation, and then lie about searching Senate computers.

That backdrop is what makes Clinton’s new list of advisers so significant.

It includes Gen. David Petraeus, the major architect of the 2007 Iraq War troop surge, which brought 30,000 more troops to Iraq. Picking him indicates at partiality to combative ideology. It also represents a return to good standing for the general after he pled guilty to leaking notebooks full of classified information to his lover, Paula Broadwell, and got off with two years of probation and a fine. Petraeus currently works at the investment firm KKR & Co.

Another notable member of Clinton’s group is Michael Chertoff, a hardliner who served as President George W. Bush’s last secretary of the Department of Homeland Security, and who since leaving government in 2009 has helmed a corporate consulting firm called the Chertoff Group that promotes security-industry priorities. For example, in 2010, he gave dozens of media interviews touting full-body scanners at airports while his firm was employed by a company that produced body scanning machines. His firm also employs a number of other ex-security state officials, such as former CIA and NSA Director Michael Hayden. It does not disclose a complete list of its clients — all of whom now have a line of access to Clinton.

Many others on the list are open advocates of military escalation overseas. Mike Morell, the former acting director of the CIA, endorsed Clinton last month in a New York Times opinion piece that accused Trump of being an “unwitting agent of the Russian Federation.” The Times was criticized for not disclosing his current employment by Beacon Global Strategies, a politically powerful national-security consulting firm with strong links to Clinton. Three days later, Morell told Charlie Rose in a PBS interview that the CIA should actively assassinate Russians and Iranians in Syria.

During his time at the CIA, Morell was connected to some of the worst scandals and intelligence failures of the Bush administration. In his book, he apologizes for giving flawed intelligence to Colin Powell about Iraq’s supposed weapons of mass destruction, but defends the CIA torture program as legal and ethical.

Jim Stavridis, a former NATO supreme allied commander Europe on Clinton’s advisory group, told Fox News Radio in July, when he was being vetted by Clinton as a possible vice presidential nominee, that “we have got to get more aggressive going into Syria and Iraq and go after [ISIS] because if we don’t they’re going to come to us. It’s a pretty simple equation.” He said he would “encourage the president to take a more aggressive stance against Iran, to increase our military forces in Iraq and Syria, and to confront Vladmir Putin” over his moves in Crimea.

The New York Times reported in 2011 that Michael Vickers, a former Pentagon official on Clinton’s new list, led the use of drone strikes. He would grin and tell his colleagues at meetings, “I just want to kill those guys.”

Others on the list played a role in the targeted killing policies of the Obama administration, including Chris Fussell, a top aide to Gen. Stanley McChrystal, and now a partner with him at his lucrative consulting firm, the McChrystal Group.

Fussell was aide-de-camp to McChrystal while he was serving as commander of Joint Special Operations Command. McChrystal oversaw a dramatic expansion in the use of night raids and assassinations, and would later be accused of condoning torture at JSOC’s Iraq Base, Camp NAMA (code for Nasty-Ass Military Area).

Richard Fontaine, a former McCain adviser and president of the counterinsurgency-focused think tank Center for a New American Security, responded to the Paris attacks by writing an op-ed that advocated, among other things, a U.S.-backed “safe zone” in Syria. He has also proposed intensifying the bombing campaign against ISIS, and increasing the presence of U.S. special forces in Iraq.

Janet Napolitano, a former Obama DHS secretary, presided over a harsh immigration policy, where the department deported a record number of undocumented immigrants — although she did support Obama’s recent executive actions designed to protect some migrants.

The closest thing the list has to a dissenter to the status quo would appear to be Kathleen Hicks, a think tanker who served in the Obama Defense Department. On a panel at the Charles Koch Institute with John Mearsheimer earlier this year, she denounced American military overreach. “A big footprint in the Middle East is not helpful to the United States, politically, militarily, or otherwise,” she said.

Despite the heavy relevance of the region to U.S. foreign policy, only one adviser, former DHS official Juliette Kayyem, is a (non-Muslim) Arab American.