A crowd-sourced analysis of new visual evidence focused on the police claim that a gun was found at the feet of Keith Scott, whose killing sparked protests in Charlotte. Viewed through the eyes of those skeptical of the Charlotte police, video recorded by Keith Scott’s wife, Rakeyia, released to the media on Friday, seems to contradict the official claim that a gun was found on the pavement near his feet after he was shot and killed by an officer on Tuesday. But a crowd-sourced analysis of the new visual evidence, which played out on social networks, suggests that the clip might instead support what Charlotte’s police chief called on Thursday “the version of the truth” put forward by his force.

The harrowing images of the fatal encounter were recorded as Rakeyia Scott pleaded with her husband to cooperate with the police and told officers who shouted at him to “drop the gun” that he did not have one. The video does not show the shooting, but it does offer a clear view of the ground around Scott’s body 20 seconds after he was shot.

Those images of the pavement, apparently clear of any objects near the victim’s feet, struck many observers as significant because there seemed to be no evidence of a gun on the ground where police later claimed one was found. A still image taken from video recorded on Tuesday in Charlotte by Keith Scott’s wife after his fatal shooting by police.

On Wednesday, police sources told reporters at two local news outlets, WSOC and WCNC, that an image taken by another witness a short time later, after police tape was stretched across the area, showed Scott’s gun on the pavement near his feet.

At first glance, the new visual evidence seemed to raise the question of whether the crime scene might have been tampered with, since the object in the later image the police identified as a gun was not clearly visible in the video taken in the immediate aftermath of the shooting.

To other viewers, however, it seemed possible that the object seen in the later image was on the ground already, but blocked from the view of Rakeyia Scott’s camera by the left foot of an officer wearing a red shirt, who stands at the edge of the crime scene in the video. 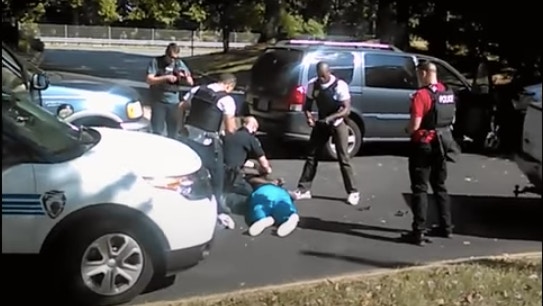 As Intercept readers pointed out in response to the first version of this post, at an earlier point in the video, recorded from farther away, there was a brief glimpse of a black mark on the ground between two shadows that could have been a gun. (The later image was taken from a different angle and either closer to that spot or with the different focal length of a zoom lens, which changes the apparent distance between the object and the curb.)

@theintercept @RobertMackey sorry the guy had to be shot, but there was a gun. Here's a screencap from the vid on your site. #roc #TRUTH pic.twitter.com/HbqqBu0hZb

Jim Cavanaugh, a retired ATF agent, told MSNBC later on Friday that it seemed likely to him that the officer in the red shirt was intentionally standing right over the handgun to guard it.

Ryan Kelly, a data editor at Roll Call, marked up screen shots from the video that appears to illustrate that interpretation of the officer’s movements in the immediate aftermath of the shooting.

A small black object also appeared near the officer’s left foot in another video clip of the immediate aftermath of the shooting, posted on Facebook Tuesday afternoon by a witness named Taheshia Williams (and removed from her public profile on Saturday, but not until it had been copied to YouTube).

The new video does make it clear that Scott’s wife told officers before the shooting that her husband had a traumatic brain injury, or TBI, and had just taken his medication, suggesting that he could have been suffering from cognitive impairment that made it difficult for him to follow their commands. The audio also records her shouting “Keith” and “don’t do it” several times just before the shooting, in what sounds like a plea to her husband. (It seems possible but less likely that this plea could have been directed at the officers instead.)

The speculation and heated debate over the new visual evidence comes as pressure grows on investigators to release video of the encounter recorded by the police on bodycams and a dashcam.

Hillary Clinton added her voice to the chorus calling for the release of all police video in a signed tweet posted on Friday afternoon.

Charlotte should release police video of the Keith Lamont Scott shooting without delay. We must ensure justice & work to bridge divides. -H

Scott’s family has said that he had a book, not a gun. His mother, Vernita Scott Walker, told WCSC, the CBS News affiliate in South Carolina, that her son was probably reading the Koran, as he did every day. “He loved to read that book,” she said.

Correction: September 23, 2016
An earlier version of this report, and its first headline, incorrectly stated that no gun was visible in the video recorded by Keith Scott’s wife. While the images are not definitive, it appears possible that glimpses of an object identified by the police as a gun can be seen.