Charlotte officials’ refusal to release the tapes of the killing of Keith Lamar Scott is only fueling skepticism about the official version of the events. 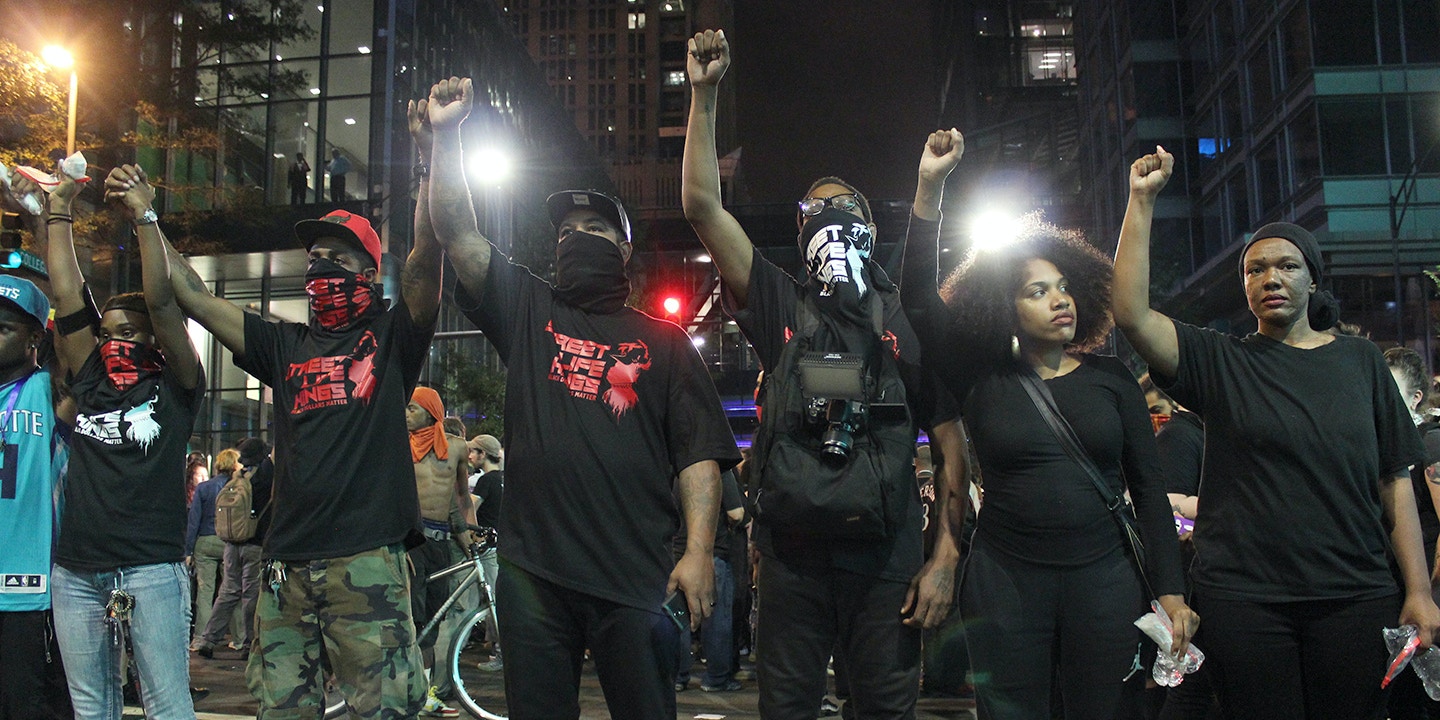 Hundreds of people continued to protest on the streets of Charlotte, North Carolina, for the third night in a row on Thursday, marching through the city peacefully for more than five hours, calling for justice for Keith Lamar Scott, and pausing by the spot where a protester was shot in the head on Wednesday.

Twenty-six-year-old Justin Carr died yesterday after sustaining a gunshot wound the night before in a chaotic scene. The official police account — that the shot was not fired by a police officer — has been called into question by some eyewitnesses.

“It could only have come from police,” said a young man who said he had witnessed the shooting, who did not give his name. Flowers and candles marked the site.

The spot where Justin Carr was shot during last night's protest. He died today #Charlotte pic.twitter.com/8vDMgRzbqt

But the tragic turn of Wednesday’s protest didn’t prevent people from coming out in large numbers Thursday and continuing to demand that officials release dashcam video of the shooting of Scott, the 43-year-old who was killed by police earlier this week.

Charlotte police chief Kerr Putney said yesterday that the department would not release video of the incident. “I never said ‘full transparency.’ I said ‘transparency,’ and transparency’s in the eye of the beholder,” he said in a widely ridiculed statement.

Police maintain that even though video evidence does not include “absolute, definitive, visual evidence that would confirm that a person is pointing a gun … it supports what we’ve heard and the version of the truth that we gave about the circumstances that happened that led to the death of Mr. Scott.”

But after viewing the video yesterday, Scott’s family said through their lawyer that the video raises “more questions than answers,” and that it should be released publicly. In the streets of Charlotte last night, that’s all that people were asking for. “Let us see for ourselves,” someone shouted, as throughout the night people chanted “We want the tapes.”

“He had a motherfucking book!” screamed someone else — referring to early accounts that Scott was holding a book when he was killed, not a gun. His family’s attorney said yesterday that “it is impossible to discern from the videos what, if anything, Mr. Scott is holding in his hands.”

But officials’ refusal to release the tapes is only fueling skepticism about their version of the events, and to protesters it has come to symbolize a greater problem with the local police department’s lack of accountability and reluctance to address the public’s concerns.

"Why do you think the people in Tulsa are not out there rioting? Cause they released the videos" #CharlotteProtest pic.twitter.com/BFl4Nu7Xot

“Why do you think the people out there in Tulsa, Oklahoma, ain’t really rioting?” a protester shouted through a loudspeaker, referring to the police killing of Terence Crutcher in Oklahoma. Police in that occasion immediately released video of the shooting, and the officer who killed him was charged with first-degree manslaughter on Thursday.

Until the tapes are released in the Charlotte case as well, protests “will continue to escalate, we’re not getting tired,” protesters pledged.

“They’re lying through the crack of their teeth, they’re covering it up,” said Justin Stewart, a young protester who was yelling “show us the videos” to a group of officers.

The one demand in Charlotte tonight pic.twitter.com/hh2OsZ8jSG

“They told us the video justifies the killing of our brother Keith Lamont Scott? We wanna see the videos, that’s all,” he told The Intercept, pledging to keep coming out on the streets “every night until further notice.”

But despite anger and frustration at officials’ handling of the case, the protests were overwhelmingly peaceful last night, and the crowds grew larger as a midnight curfew imposed by Mayor Jennifer Roberts came and passed.

This protest is not getting any smaller #Charlotte pic.twitter.com/rBgC8oJQHu

Early in the night a large crowd assembled by the Charlotte city jail, chanting “We love you” and cheering at those held in custody inside, who responded by flicking lights on and off.

Cheering up to the Charlotte city jail, people inside flicking the lights in response pic.twitter.com/uOi6gGAc0L

Rev. Shawn Elliott Richardson stopped to look up at the jail building, “That’s awesome.” He was wearing a Colin Kaepernick jersey and got high-fives and shoutouts as he kept walking along the crowd.

“I’m actually a Carolina Panthers fan, but because no one on the team is standing up for the call, I’m forced to wear somebody else’s jersey,” he said, adding that he was a “Carolina man” and would continue to stand by his team despite the disappointment, but he wished people would get indignant at police violence rather than a football player’s protest. “The people that’s doing the oppressing are usually the people that have a problem with what’s going on, but everyone needs to be out here, we’re all Americans.”

Elsewhere in the city, protesters took a cue from Kaepernick and kneeled down before police, as he has been doing in protest during the national anthem.

And taking a knee #Charlotte pic.twitter.com/HM5sNhoqhl

As the night progressed, protesters kept circling around the uptown area of Charlotte, handing out water bottles and energy bars, staging a “die-in” outside the police department’s headquarters, trying to engage police officers and National Guardsmen in conversation, and pinning flowers on officers’ uniforms.

“Everybody has big emotions about what’s going on, and I didn’t want them to think that everybody’s against them,” said 22-year-old Alexis Vandenberg, who was walking past a row of guardsmen, shaking each one’s hand with a smile. “Even I was going to join the National Guard.”

She would hug a cop, too, she said. Others said they felt the National Guard was there to protect them from police, while some called on black guardsmen, in particular, to “abandon the uniform of the oppressor.”

“We need you on this side,” a young woman said to a guardsman, who kept his hands on his rifle as he listened to her intently. “My black brother, you are better than this.”

Protester to black guardsmen "We need you on this side, my black brothers you're better than this" pic.twitter.com/h1Hii2Rbv0

The only time the protest turned tense was when a group of demonstrators briefly shut down part of Interstate 277, before being dispersed by police shooting pepper-spray balls. But throughout the night, the more common view was that of protesters shaking hands and bumping fists, even hugging, with National Guardsmen and officers who lined the streets.

Police didn’t enforce the curfew, leading some to remark that protests only turn violent when police escalate them.

At a press conference on Friday morning, Charlotte police chief Kerr Putney said a suspect in the death of Justin Carr was apprehended after detectives used video of the scene to investigate the shooting.

Putney also deflected reporters’ questions about Keith Scott’s police killing, debating the value of video, and insisting that releasing the tapes now “can inflame the situation, and make it even worse.”

“I know the expectation that video footage can be the panacea, and I can tell you that is not quite the case,” he said. He added that police will no longer update the public on Scott’s case, as the investigation was turned over to the state.