The president claims he is putting accountability and transparency measures in place that will “serve the American people well in the future.” 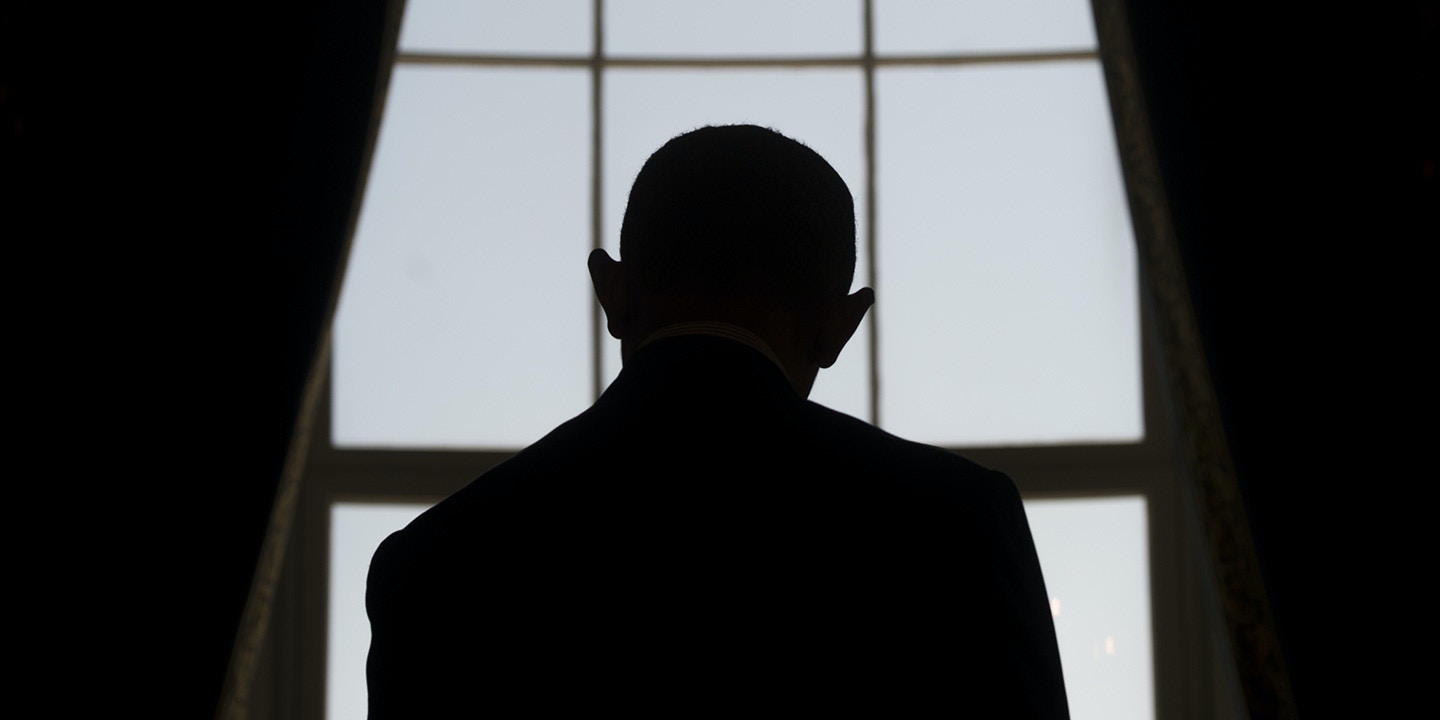 President Obama warns in a new interview of a future in which a U.S. president could engage in perpetual covert wars “all over the world.” But he claims that the accountability and transparency measures he is instituting will make that less likely.

In the interview, with New York magazine’s Jonathan Chait, Obama expressed agreement with one of the most salient critiques of his drone war, that it risks creating “institutional comfort and inertia with what looks like a pretty antiseptic way of disposing of enemies.”

Obama explained that he had looked at “the way in which the number of drone strikes was going up and the routineness with which, early in my presidency, you were seeing both DOD and CIA and our intelligence teams think about this.”

He continued: “And it troubled me, because I think you could see, over the horizon, a situation in which, without Congress showing much interest in restraining actions with authorizations that were written really broadly, you end up with a president who can carry on perpetual wars all over the world, and a lot of them covert, without any accountability or democratic debate.”

[See update below, in which the White House press secretary says Obama was actually talking about how he felt before he instituted his reforms.]

The president expressed a sense of urgency to rein in these powers that seems particularly appropriate given that both candidates for the White House have indicated receptiveness to intensifying the use of military force abroad, with Donald Trump going so far as expressing openness to killing the families of suspected terrorists.

“By the time I leave here, the American people are going to have a better sense of what their president is doing,” Obama said. “Their president is going to have to be more accountable than he or she otherwise would have been. The world, I think, will have a better sense of what we’re trying to do and what we stand for. And I think all of that will serve the American people well in the future.”

But the one existing transparency measure Obama touts as an example in the interview — the administration’s release of its tally on civilian casualties from drone strikes in Yemen, Pakistan, and Somalia — was viewed by many in the human rights community as a farce, largely because it pointed to a death toll far lower than outside observer tallies.

The release, made public on the Friday afternoon of Fourth of July weekend, reported that between 64 and 116 civilians were killed during Obama’s two terms. The Bureau of Investigative Journalism, by comparison, has estimated that between 492 and 1,077 civilians have been killed by drone strikes during the eight years of Obama’s presidency.

And critical questions about those operations remain unanswered, such as the circumstances that led to the death of Momina Bibi, a 68-year-old Pakistani grandmother killed in an October 2012 airstrike; or the reason for the attack that took the life of Salim bin Ahmed Ali Jaber, an anti-al Qaeda imam in Yemen a month earlier; or the full story of how American forces came to target a wedding convoy, also in Yemen, a year later, killing 12 people.

Those questions remain unanswered, in part because when the administration released the civilian casualty report, it did so without detailing a single specific incident in which the deaths of civilians were confirmed — thus foreclosing any possibility for follow up or public accountability for those operations. (See The Intercept’s series The Drone Papers describing the secret military documents that exposed the inner workings of Obama’s drone wars.)

What’s more, the alarming changes that Obama describes as over the horizon are already here.

“What’s so interesting is that President Obama acknowledges this problem — that future presidents will be empowered to kill globally, and in secret. What he doesn’t acknowledge is how much of a role his administration had in making that a bizarre normal,” Naureen Shah, director of national security and human rights at Amnesty International, told The Intercept.

“There is something so strange about the person who many would say is very responsible for this situation actually acknowledging it and saying he tried to plan for it,” Shah added. “What we’ll be left with from the Obama administration is a far more dangerous precedent of secret, global killings than what we started with.”

From the very beginning of his presidency, Obama tightly embraced legal arguments, including the “state secrets privilege,” to deflect inquiries into the government’s use of lethal force in foreign countries; he fought vigorously for years to keep his rationale for assassinating an American citizen secret; he never explained how the U.S. came to kill that same American citizen’s 16-year-old son; and he has never once forced his premier intelligence agency to publicly answer for the deaths of non-Western civilians — of which there have been many — during an eight-year covert bombing campaign.

In the New York magazine interview, Obama gave human rights groups and “the left” credit for pushing him on issues of transparency in targeted killing — but at the same time indicated they had little impact on his own decisions.

“I’m glad the left pushes me on this,” Obama said. “I’ve said to my staff and I’ve said to my joint chiefs, I’ve said in the Situation Room: I don’t ever want to get to the point where we’re that comfortable with killing. It’s not why I wanted to be president, to kill people.”

“Do I think that the critiques are fair or fully informed?” the president went on to say. “Not always. Sometimes they are. Much of the time they’re not. To give you the most basic example: People, I think, don’t always recognize the degree to which the civilian-casualty rate, or the rate at which innocents are killed, in these precision strikes is significantly lower than what happens in a conventional war.”

While the Obama administration characterizes drones as a surgically precise weapon, the facts don’t always support that conclusion. In 2013, for example, research by Larry Lewis, a former research scientist at the Center for Naval Analysis, found that drone strikes in Afghanistan were 10 times more likely to kill civilians than piloted airstrikes.

Obama’s critique of Congress — that it doesn’t seem to care enough to rein in the drone program — is both on point and ironic, coming from him. Far from encouraging Congress to weigh in, the Obama administration has actively fought Congress’s attempts to even get basic information about drone strikes. The White House, for instance, refused to show the legal memos authorizing the killing of Anwar al-Awlaki to Congress until 2014, when Obama nominated the memos’ author to become a federal judge, and a group of senators threatened to hold up the confirmation until they could read the memos.

Chris Anders of the American Civil Liberties Union said he was not impressed by Obama’s own sense of restraint. “The president has left behind very broad claims of executive authority to order lethal strikes away from traditional battlefields. Even if he’s instituted some processes, and some minor levels of transparency — such as aggregate levels of casualties — it is still a very broad power with almost no meaningful checks on it.”

Update: 6:15 p.m. ET
White House Press Secretary Josh Earnest on Monday told reporters that Obama’s comments about a future president potentially waging perpetual wars actually referred to a state of affairs in the past, which he has since averted.

“He was talking about the situation he inherited,” Earnest said. “In the early days of the administration, he was considering the tools that had been made available to him, and considering the way in which they were being used, and he was considering how, over the horizon, was a scenario in which there would not be sufficient transparency in place to contain this extraordinary authority that, based on new technology, could be wielded by the president of the United States.”

Earnest insisted that “what the president and his team have steadily worked to do is to try to impose greater transparency and to impose constraints that would address those concerns that the president had from his earliest days in office.”

But rather than wind down a Bush-era program, Obama dramatically escalated the pace of drone warfare, conducting nearly nine times the number of strikes as his predecessor.

Obama’s moves toward increased transparency and accountability are, as mentioned above, limited. And Congress has neither conducted oversight nor passed legislation that would restrain a future president.

And as Obama himself said in the interview, he has not arrived at “a perfect solution.” He told New York magazine that the country still needs to find a balance between “not elevating every terrorist attack into a full-blown war” and “pretending as if we can just take shots wherever we want, whenever we want, and not be answerable to anybody. What I’ve tried to do is to move the needle in the right direction, to set some trends in the right direction. But there’s gonna be a lot more work to do.”